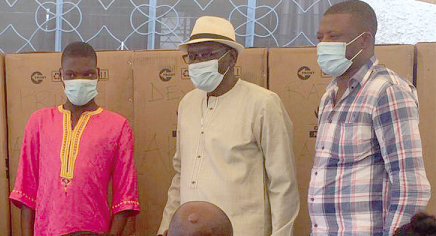 Some 50 persons Living With Disabilities (PWDs) have received their share of the Ayawaso Central Municipal Assembly’s (ACMA) Disability Fund.

The 50 were shortlisted from 114 PWDs who applied for the fund and were vetted.

Out of the 50, 27 received items such as deep freezers, laptops, sewing machines, refrigerators, photocopier machines and popcorn machine, while one will undergo an apprenticeship programme.

The remaining 22 will receive support in the form of perishable and non-perishable items to sell, including frozen fish, water, soft drinks, call cards, make-up accessories among others.

At a ceremony to hand over the items to the beneficiaries, the Municipal Chief Executive (MCE), Alhaji Mohammed Quaye, explained that the move was in fulfilment of the government’s responsibility to support PWDs in the country as enshrined in the Constitution.

He observed that with the needed support and opportunities, PWDs could drive the country’s economy forward, adding that disability was not inability, hence PWDs could not look down on themselves.

“The potential of PWDs can be realised with the right assistance,” he said.

He urged them to put the items to good use in order to derive the desired results needed to empower them economically.

The MCE further urged the beneficiaries to desist from selling the items donated to them.

“I promise to promote all PWDs within the ACMA as I have always done and it is my desire that all PWDs excel in whatever they do,” Alhaji Quaye said.

The Chairman of the assembly’s Disability Fund, Mr Abubakar Alhassan, noted that the monitoring team would embark on occasional visits to ensure that the items were being used for their intended purposes.

The beneficiaries, on the other hand, thanked the assembly for the gesture and pledged to use the items to better their lives.