The leadership of the St Augustine’s Past Students’ Union (APSU) yesterday[September 1, 2022] commiserated with former minister of state and one-time Member of Parliament for New Juaben, Hackman Owusu-Agyeman, over the passing of his wife.

Mr Owusu-Agyeman is a member of the 1961 Year group of the union.

Mrs Comfort Owusu Agyeman died on August 25, 2022, in the United Kingdom (UK) after a short illness.

The delegation also signed a book of condolence opened in memory of the late wife of the current Chairman of the New Patriotic Party’s Council of Elders.

Dr Osei stated that Mr Owusu-Agyeman remained a strong pillar of the union and the school, offering countless donations and other forms of support, adding that the union had struck a relationship with Mrs Owusu-Agyeman through her husband.

“It is our prayer and belief that the Almighty God who knows best will keep you in His bosom and give you perfect peace”, he said. 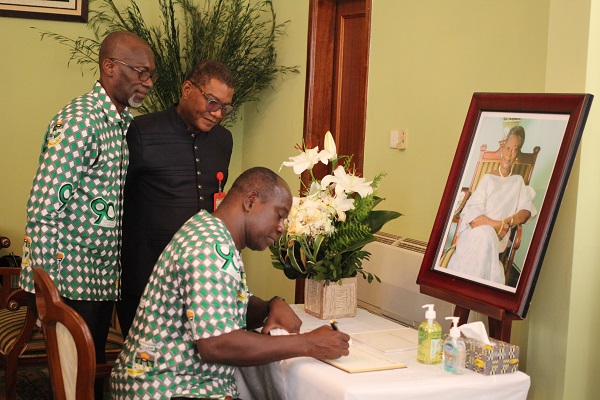 “A painful loss, indeed. God knows the very best and we must take consolation in that. Amen,” read Mr Asmah’s words in the book of condolence.

The group assured Mr Owusu-Agyeman of their support during his time of mourning.

Mr Owusu-Agyeman explained that his wife passed after four months of medical care outside the country.

The one week observance has been scheduled for Thursday, September 8, 2022, at their East Legon residence in Accra.

Mr Owusu-Agyeman expressed his gratitude to the group for the words of consolation and encouragement.

As a wife of one of the founder members of the NPP, Mrs Owusu-Agyeman had played an integral role in the formation days of the party.

She supported the party at the basic and national levels, both in government and in opposition.
Party stalwarts such as Professor Albert Adu Boahen, former President John Agyekum Kufuor, President Nana Addo Dankwa Akufo-Addo, B.J. Da Rocha, Dr Safo Adu, Amoako Tuffour, and others were said to have been treated to warm hospitality at the home of the Owusu-Agyemans through the service of Mrs Owusu-Agyeman when the party sought to build its foundation.

She gave birth to four children.