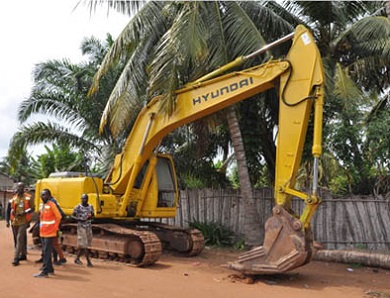 An abandoned payloader near the Goba Beach
30.5k Shares

Twenty persons, including four Chinese, have been arrested in the past eight weeks in the Volta Region for diverting pre-mix fuel and engaging in illegal sand winning activities.

They were grabbed in an operation by a special task force set up by the Volta Regional Security Council (REGSEC) to curb the high trend of wanton environmental offences in the region.

Chairman of the task force, King David Akpabli, disclosed this at a media briefing in Ho last Wednesday.

He said some of the suspects were caught red-handed winning sand at the beach in the night in Keta.

Two others were in the process of smuggling pre-mix fuel from Keta to Togo when members of the task force caught up with them in Aflao, he added.

According to Mr Akpabli, the Chinese were involved in illegal gravel winning along the Ehi-Agbozume road.

He said the suspects had been handed over to the Volta Regional Police Command.

Four trucks and one excavator belonging to the suspects had been impounded, Mr Akpabli added.

Meanwhile, he expressed concern over the presence of more than 3,000 settlers in Kalakpa Game Reserve and said the number was now overwhelming and inimical to the reserve.

He said the settlers had since 1975 ignored instructions from the government to leave the reserve.

“This time, we will face them squarely,” Mr Akpabli affirmed.

He appealed to members of the public to support the fight against environmental degradation by exposing the culprits to the security agencies.

In a related development, a task force from the Environmental Protection Agency led by the Regional Director, Hope Smith Lomotey, swooped on an illegal sand winning site near Sogakope a fortnight ago and arrested 10 suspected illegal sand winners.

Two heavy duty trucks and one payloader were impounded in the operation.