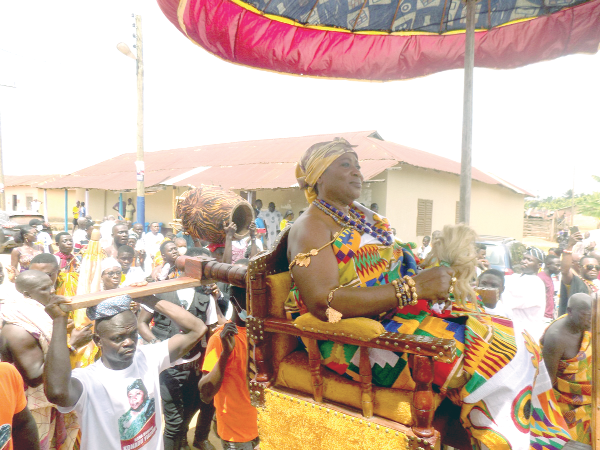 Nana Bamfoa Konadu Yiadom in a palanquin being paraded through the principal streets of Anyinam Kotoku
30.5k Shares

A new queenmother for Anyinam Kotoku Number 2 in the Eastern Region has been installed.

She is Nana Bamfoa Konadu Yiadom I, a 51-year-old based in Canada and known in private life as Madam Afua Konadu.

She was installed at a grand durbar of the chiefs and people of the traditional area last Saturday.

Speaking at the durbar, the acting Nifahene of Akyem Kotoku Traditional Area, Obrempong Tabi Anom, stressed the need for traditional rulers to comport themselves and also lead exemplary lives in order to sustain the confidence of the kingmakers and their subjects.

He also urged them to mobilise all available human and material resources to develop their communities.

Obrempong Anom, who is also the chief of Akyem Anamase, advised the people in the area to eschew chieftaincy and land disputes that retard progress and instead offer their maximum support for the new queenmother to ensure the success of her reign.

Obrempong Anom further admonished the youth in the area to refrain from social vices such as prostitution, illegal mining also known as galamsey and the use of illicit drugs which was becoming rampant.

In her maiden address, Nana Konadu Yiadom I promised to run an open-door administration and urged the people not to hesitate to approach her with their problems and suggestions.

She promised to push for the establishment of a big market at Anyinam Kotoku to create employment avenues for the people in the area.

The queenmother used the forum to donate a fridge-freezer and a flat screen television set to the local clinic.

The proprietress of Tema-based Queenstar International School, Mrs Paulina Adjei-Maafo, who was the special guest, also enjoined the youth in the community not to waste their youthful exuberance on unproductive ventures but should play vital roles in the development of the area in particular and Ghana in general.

She also urged parents to strive to give their children, particularly, their daughters, the best of education for them to become responsible future leaders.

Mrs.Adjei-Maafo spoke against teenage pregnancy, which prevents female students from reaching the apex of their academic pursuit.

An Accra-based educationist, Mrs Gloria Danso Benefo, also urged parents not to neglect the education of their daughters as that would deprive them of rubbing shoulders with their male counterparts.