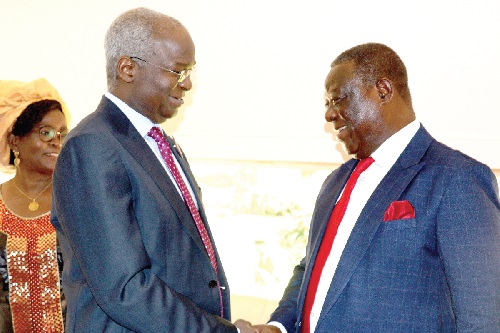 The Minister of Roads and Highways, Kwasi Amoako-Atta, has urged partners of the Abidjan-Lagos Corridor Highway Development project to include funding of land acquisition and compensation to affected persons in the project cost.

He said leaving respective member states to bear the entire cost of acquisition and compensation of affected people could delay the trans-African highway project.

Speaking at the 17th Steering Committee of the project in Lome, Togo, last Friday, Mr Amoako-Atta said considering the huge cost involved, it would be difficult for Ghana, for instance, to provide those funds in a relatively short period.

Land acquisition for the Ghana section of the project constitutes more than 50 per cent of the entire length of the corridor.

Since one of the objectives of the project is to provide an expressway with little or no congestion to facilitate the free movement of goods and people, the technical committee settled on a by-pass in Accra which will also have a tunnel.

According to Mr Amoako-Atta, Ghana had put a team together to start marking the alignment, stakeholder engagements and documenting affected persons to assess the number of people as well as property that would be affected.

The EU and the African Development Bank are funding the project.

The 17th Steering Committee Meeting was attended by ministers or their representatives in charge of road works of the corridor member states, namely Ghana, Nigeria, Togo, and Cote d’Ivoire.

Although Benin is a member of the ALCO, it did not attend the meeting.

Representatives of the ECOWAS Commission, AfDB, the EU and the Abidjan-Lagos Corridor Organisation (ALCO), including project directors and technical experts from member states of the project and ECOWAS Project Preparation and Development Unit (PPDU) also participated in the meeting.

During the plenary, the committee was briefed by the technical committee that ECOWAS had reviewed the financial proposal submitted by the consultant for the feasibility and preliminary design studies of the tunnel.

It is expected that the financial negotiations will be completed on Thursday.

An agreement between AfDB and EU for an additional €3.5m grant from EU-African Finance Initiative (AFIF), now known as African Investment Platform (AIP), had been signed to fund the addendum to the project, the Accra By-pass Tunnel.

While Ghana, Cote d’Ivoire and Togo have started the processes to secure the right of way, Nigeria has already acquired and gazetted it.

The 1015-kilometre road will have six lanes, rest stops with many facilities and joint border posts.

Also, a road safety audit is being conducted, while Togo and Benin are conferring on where to position a joint border post.

In a communique issued after the one-day meeting, the participants affirmed their commitment to the implementation of the project and recommended that innovative financing options such as tax credit for the project should be explored as an incentive for private sector participation.

They also thanked the two key development partners, AfDB and the EU, for their continued support, and welcomed the new ECOWAS Commissioner for Infrastructure, Energy and Digitalisation, Sédiko Douka.