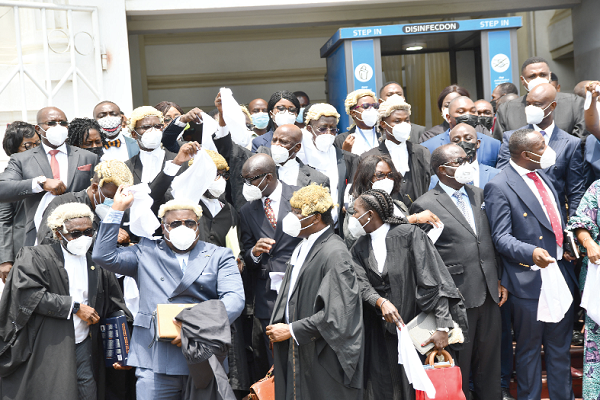 Members of President Akufo-Addo’s legal team and some executive members of the NPP waving white handkerchiefs as a sign of victory after the judgment. Picture: EBOW HANSON Follow @Graphicgh

Lawyers for President Nana Addo Dankwa Akufo-Addo in the 2021 presidential election petition went to the Jubilee House yesterday with victory songs soon after the verdict of the Supreme Court, to celebrate the triumph of the President in the case.

With Mr Anthony Akoto Ampaw in the lead and supported by Mr Kwaku Assilfie, Mr Yaw Oppong, Mr Frank Davies and about six other lawyers, they burst into songs from the Methodist hymnal to praise tunes, all praising God for the victory.

Apart from the lawyers who sang and danced, nothing happened at the Jubilee House to indicate that there had been reaffirmation of the 2016 election victory of President Akufo-Addo by the Supreme Court of Ghana.

The lawyers who had been standing at the entrance to offices leading to the Presidential Block for about five minutes spontaneously burst into the singing of Methodist Hymn 74, titled“Praise to the Holiest in the height,” composed by B. Dykes who lived from 1823 to 1876.

To the surprise of the Presidential Press Corps who had laid ambush to catch a glimpse of the victory squad, Mr Ampaw emerged from his car from about 100 metres afar and started running towards where his colleagues had gathered waiting amid shouts of “Shay Shay”, which Mr Ampaw is affectionately called.

He responded to the shouts with a victory sign.

It was a spectacle to behold as visitors, administrative staff, appointees, security personnel and others watched the jubilant legal team.
Immediately the cheer leader, Mr Davies, realised that the captain of the team, Mr Ampaw had joined them, he urged the members to join hands and started marching, singing and dancing towards the offices of the President to brief him.

There was no indication from as early as 8a.m. that people at the Jubilee House were in anticipation of the judgement of the election petition. It was work as usual.

President Akufo-Addo reported to work as always and was seen wearing a blue black suit over a white top. As if by design, none of the appointees and staff were seen in white.

As part of his schedule for the day, President Akufo-Addo around 12 mid-day received the outgoing Nigerien Ambassador, Dr Alhosseini Ousumane, and no mention of the judgement took place.

He also met the membership of the Local Organising Committee for the 2023 All African Games.

There were no celebrations after the Supreme Court gave its verdict.