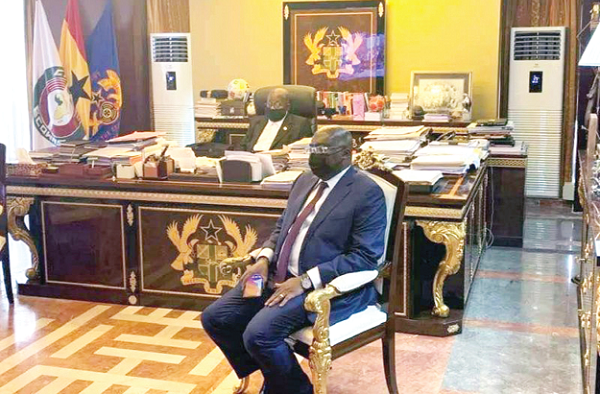 President Akufo-Addo and Vice-President Bawumia watched the delivery of the judgment together in the President's office
30.5k Shares

The court said President Akufo-Addo indeed obtained the 50 per cent plus one threshold, re-affirming him as the validly elected President of Ghana.

The President and his Vice were seen in a brief video keenly watching the Supreme Court's proceedings at the Jubilee House in Accra.

The first and second gentlemen of the land reacted with excitement after the final ruling by the apex court.
Bowed gently

Vice President Bawumia momentarily got up from his seat and moved towards the President, with his hands close to his chest and bowed gently before him, beaming with smiles.

Chief Justice Kwasi Anin-Yeboah read the over two-hour verdict of the seven-member panel, with the key point being: “The petition has no merit and was accordingly dismissed”.

He said the Electoral Commission’s error could not void the results declared by the Chairperson of the Commission, Mrs Jean Adukwei Mensa.

The court said the petitioner, Mr John Dramani Mahama, could not demonstrate how the alleged errors affected the declaration of the presidential election results.

The presidential election results announced by the EC gave the then candidate Nana Akufo-Addo 6,730,413 of the valid votes cast, representing 51.295 per cent, which is above the 50 per cent plus one vote threshold.

The declaration of the result did not violate Article 63(3) of the 1992 Constitution and the allegations of vote padding was not proven by credible evidence, the court said.

Therefore, there was no reason to order a re-run of the 2020 presidential election as requested by former President John Mahama, the petitioner.
On December 30, 2020, lawyers of former President John Mahama filed a petition at the apex court challenging the validity of the presidential election results that declared President Akufo-Addo as the winner on December 9, saying it breached the 1992 Constitution.