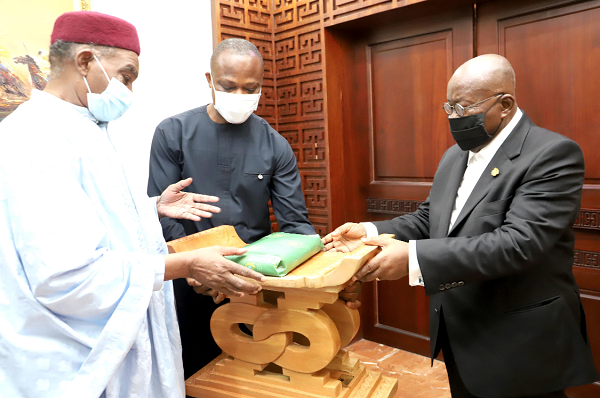 President Nana Addo Dankwa Akufo-Addo has described Nigeriens in Ghana as law-abiding people who are noted for their shrewdness in business.

He said Nigeriens had always been welcomed with open arms by the people and treated as partners in the development of the country.

According to the President, Nigeriens who were popularly referred to by some as Zamaramas, had lived in the country for many years and had been engaged in various trading activities, as such “we find it easy to live side by side with them”.

He said the Second Lady, Mrs Samira Buwumiah’s, ancestry, including others who continued to contribute to the growth of the country, could be traced to Niger.

President Akufo-Addo said this when the outgoing Nigerien High Commissioner to Ghana, Dr Alhasseini Ousumane, bade farewell to him at the Jubilee House in Accra yesterday.

Nana Akufo-Addo described a former President of Niger, Mr Mahamadou Issoufou, as a sympathetic and hardworking person, commending him for his performance during his tenure as the Chairman of the African Union (AU).

He said as the chairman of the AU, Mr Issoufou played a critical role in the realisation of the African Continental Free Trade Area (AfCFTA), which was one of the significant initiatives undertaken by the AU since its birth.

According to the President, the free trade area would provide a course for the progress of the continent, adding that “when the history of the AU is written, Mr Mahamadou Issoufou’s name will be written in letters of gold”.

President Akufo-Addo also said the outgoing envoy, Dr Ousumane, was supportive in the promotion of the historic relations between Ghana and Niger.

The outgoing envoy expressed appreciation to the President for the support he and the government offered him during his duty tour of the country and said he had learnt and experienced a great deal of the Ghanaian hospitality.

He said the more than a million Nigeriens in the country were also benefiting from the Ghanaian hospitality.