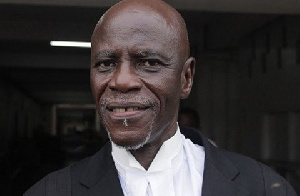 Private Legal Practitioner, Mr Akoto Ampaw, has described as scandalous and defamatory allegations levelled against him by lawyer Akwasi Afrifa.

According to Mr Ampaw, Mr Afrifa’s allegations are “infantile and preposterous” and do not add up.

He has, therefore, called on the public to desist from soiling his reputation to their advantage.

In a press statement issued by Mr Ampaw, dated July 19, 2021, he said, “I had originally taken the view that the oblique insinuations in Lawyer Afrifa’s response, which fortuitously became public almost immediately after he had written to the Council, were so infantile and preposterous that they did not deserve the dignity of a response from me.”

“Lawyer Afrifa must have his own diabolical reasons for trying to implicate me in this crazy judicial bribery scandal, which manifestly does not add up,” he said.

He has alleged that Mr Afrifa collected US$100,000 from him, with the promise to help get a favourable judgment on his behalf.

Ogyeedom Atta IV is asking the GLC to order Mr Afrifa to refund the US$100,000 because, according to him, Lawyer Afrifa failed to use the money for its intended purpose.

According to him, the petitioner (Ogyeedom) told him (Mr Afrifa) to refund a GH¢300,000 legal fees paid to him to allegedly enable him (Ogyeedom) to raise a US$5 million bribe to be paid to the Chief Justice to get a favourable decision in a pending legal dispute.

"At the end of July 2020, the Petitioner informed me that friends of his who were highly connected politically had taken him to see the Chief Justice who had agreed to help him win his case on condition that he dropped my good self as the lawyer handling the case for him and engage Mr Akoto Ampaw in my stead.

"He further informed me that the Chief Justice had demanded a bribe of US$5,000,000 for a successful outcome to his case and that he had already paid US$500,000 to the Chief Justice. He further indicated that he was hard-pressed to raise the remainder of the US$5,000,000 and so I should refund some of the GH¢300,000 paid me as fees because he had, in line with the advice of the Chief Justice, engaged Akoto Ampaw Esq as solicitor to continue the case before the Supreme Court," Afrifa added.

However, the Chief Justice, Justice Kwasi Anin Yeboh, has since petitioned the Director General of the Criminal Investigations Department (CID) of the Ghana Police Service, Commissioner of Police (COP) Mr Isaac Ken Yeboah, to launch criminal investigations into the matter.

Mr Ampaw, in his response to the allegations, said in July, 2020, Ogyeedom approached him with a request to take over a case at the Supreme Court but he declined.

“During the legal vacation, last year, Ogyeedom came back to consult with me, and, with much reluctance, I agreed to take up the brief, upon the very clear understanding that if he wanted me to take up the case because he thought I was politically connected or had friends within the judiciary, then he was at the wrong place, as I did not carry on my work as a lawyer by such dishonourable means.

“Eventually I agreed to take up the brief and filed notice of change of lawyer in the Supreme Court sometime in October. I have since been in the Supreme Court on a few occasions in respect of the matter to move an application to adduce new evidence in response to the Court’s grant of an earlier application by the appellant to adduce new evidence,” he said.