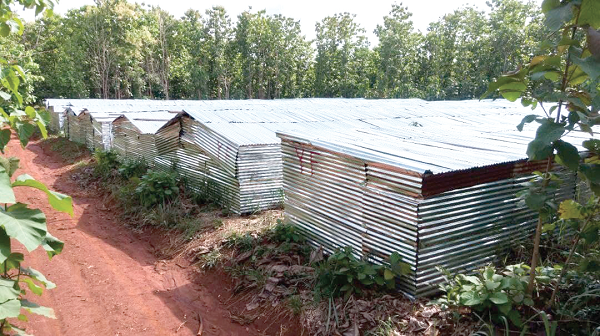 The Environmental Protection Agency (EPA) has begun the auditing of structures within lands earmarked for Newmont Ghana’s proposed Ahafo North mines to ensure the prompt payment of compensation to eligible property owners.

Newmont Ghana approved the implementation of its Ahafo North mine — the company’s third stand-alone project in the country, which development is estimated to cost between $750 and $850m with an expected average production of approximately 275,000 to 325,000 ounces of gold in the first five years of operations.

Consequently, officials of the EPA have been engaging residents of the five communities — Yamfo, Adrobaa, Techire, Afrisipakrom and Susuanso — where some people were alleged to have erected makeshift buildings and constructed fish ponds on sections of the 4,045 hectares of land space set aside for the project.

The EPA is currently enumerating and auditing structures within the project area in line with the speculative management plan developed to assist in the resolution of challenges.

According to the Deputy Executive Director in charge of operations at the EPA, Mr Ransford Sakyi, the enumeration would ensure the payment of prompt and adequate compensation to eligible persons.

EPA and Newmont had indicated that persons with structures in the declared zone prior to September 2017, would qualify for compensation packages from the company.

An aerial survey conducted by the EPA with selected journalists on Thursday, July 15, 2021 saw many homes built and roofed with aluminium sheet across the communities where the concession sits.

The team also noticed that many of the houses were built on bushy surfaces, while others were cited in the middle of trees without occupants.There were also fish ponds within headwaters of streams and rivers, impacting negatively on the quality of water bodies in the area.

The officials described the situation as an alleged attempt to illegally benefit from the compensation package.

The Executive Director of the EPA, Dr Henry Kokofu, explained that following the declaration of the area as a mining zone in September 2017, Newmont Ghana was mandated to conduct a rapid assets survey (RAS) to identify all existing structures.

As a result, all immovable property within the area were counted and assigned with unique codes for the payment of compensation in line with the Minerals and Mining Law.

He, therefore, expressed worry at the turn of events after the completion of public hearings in December 2019 in the affected communities.

“Our finding after the 2019 activities revealed that landowners, tenant farmers, sharecroppers, investors and non-residents, in anticipation of compensation payments, have undertaken massive speculative activities in the project area,” Dr Kokofu said.

He, however, said the EPA would continue to dialogue with the district assemblies, chiefs and other stakeholders to resolve the matter.

The Vice President in charge of Sustainability and External Relations at Newmont, Ms Adiki Ayitevie, said the company had between September 2017 and 2019 notified the communities of the demarcation of the areas as a mining zone and as such, asked them not to undertake any activity there.

She said a community patrol team was subsequently set up to constantly engage residents for a peaceful resolution of their grievances as the company was still going through the approval processes for the project to come on stream.

The Paramount Chief of Yamfo, Nana Ansah Adu-Baah II, said they would cooperate with the EPA and the company to address the issues amicably.

He, however, appealed to them to ensure that all persons affected by the project were duly compensated.