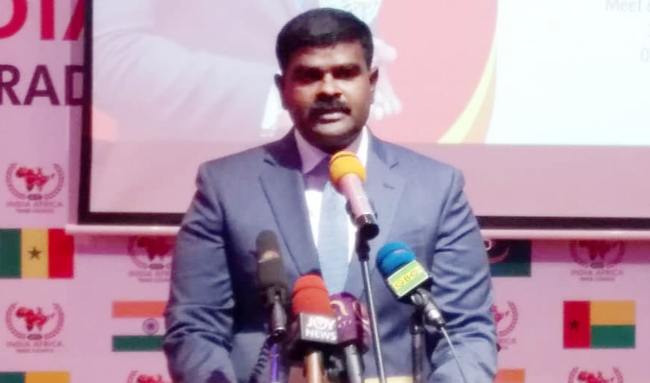 The Namibian High Commissioner to Ghana, Mrs Selma Ashipala-Musavyi, has called for greater collaboration between Indian businesses and their African counterparts to boost trade between the two sides.

She said trade between the continent and India would grow businesses in Africa, particularly at a time when most Indian companies desired to invest on the continent.

The IATC was established in 2020 to strengthen business relations between India and Africa.

It is a privately funded non-governmental organisation which liaises between African and Indian businesses.

The IATC was formed in consultation with the various heads of trade bodies in Africa and the presidents/ representatives and professionals of high repute from the entire Indo-African region, with a view to giving the business communities of both regions a voice and a tool to foster development.

The organisation has its global secretariat in Bangalore with offices in Morocco, Algeria, Tunisia, Mauritania, Djibouti, Ethiopia, Ghana, Zimbabwe, Kenya, Tanzania, Namibia, Botswana, Lesotho and South Africa, and is registered as a non-profit organisation under the Indian Trusts Act of India.

The Namibian High Commissioner to Ghana said India had stood with Africa in both good and bad times, noting that India had emerged as an important global economic partner for Africa.

She expressed the hope that the IATC would become the building block for Africa to be desired by all and help the continent become relevant in the global economy for the right reasons.

Mrs Ashipala-Musavyi appealed to captains of industry in Ghana and Africa to embrace such trade partnerships to create a better society for all.

The Head of the Local Government Service, Dr Nana Ato Arthur, urged Mr Rajamani to use his new position to boost business relations between India and Ghana, in particular, and Africa as a whole.

“Let Ghana be on top of your priority as India opens up to the entire African continent,” he said.

He expressed the hope that under the leadership of Mr Rajamani, Ghana would have sustainable partnerships between cities and communities in India and Ghana in line with the United Nations’ Sustainable Development Goal 11, which seeks to make cities inclusive, safe, resilient and sustainable.

Mr Rajamani said as Chief Chancellor of the India-Africa Trade Council in West Africa, he would dedicate himself to the service of the organisation, mindful of the fact that the IATC had a unique responsibility to champion business and trade facilitation globally with emphasis on Indo-Africa trade partnerships.

He declared his resolve to offer faithful and diligent service to IATC, and appealed to all member states to lend their support, bearing in mind that their common aim was to attain excellence.

Mr Rajamani pledged to foster a strong working relationship with foreign missions and partners to enable India and Africa to eradicate trade deficiencies by leveraging on multi-lateral advocacy to open up trade lines across both continents.

He identified agriculture, agro processing and technology transfer as areas in which Ghana and India could collaborate to enhance livelihoods.

He said Ghana, for instance, predominantly exported raw agricultural produce to the Asian country, and said India could play a catalytic role in Africa’s collective effort to boost the region’s exports through technological interventions.