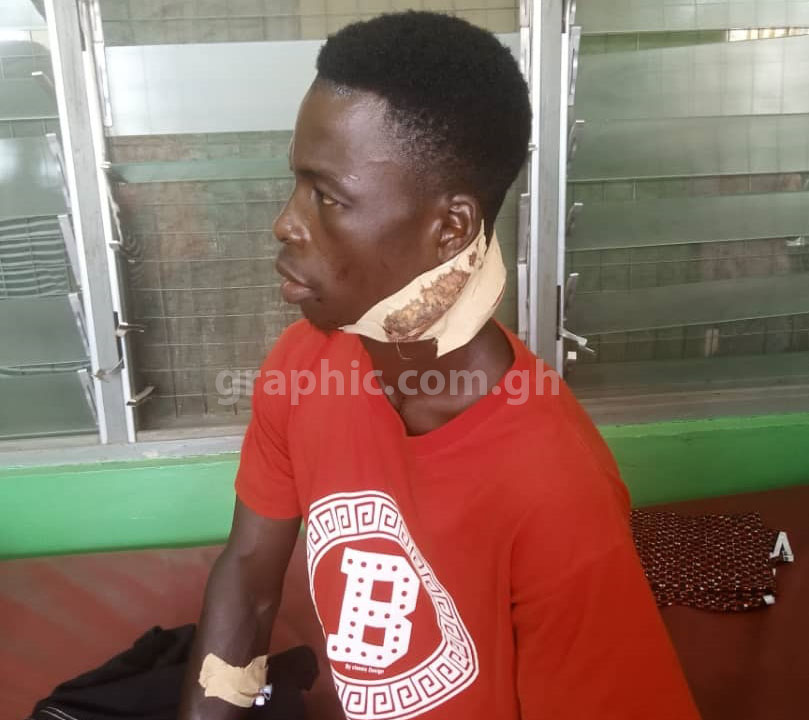 A 30-year-old man from Agona Duakwa in the Central Region is responding to treatment after his wife inflicted multiple machete wounds on his neck during an altercation.

Abraham Acquah and his wife, Mary Quaye also known as Obaa Yaa reportedly engaged in a fight on Monday dawn, April 26, 2021 during which Mary reportedly picked a cutlass and attempted to cut off the head of her husband in what she told police was self defence.

The incident has left Acquah with multiple deep cuts on his left jaw, neck and shoulder and responding to treatment at the Agona Swedru Government Hospital, reports Graphic Online’s Shirley Asiedu Addo and Gilbert Mawuli Agbey.

The Central Regional Police Public Relations Officer, Deputy Superintendent of Police (DSP), Ms Irene Oppong the case was reported to the police at 4am on April 26, 2021.

It was the wife, Mary Quaye who in the company of one Paul Atta, also a resident of Agona Duakwa reported the case to the police at Agona Duakwa.

Mary told the police the incident happened around 1 am.

Mary told the police that during the altercation, Abraham first hit her with a piece of wood and in defence, she picked up the machete which was under the bed and inflicted the wounds on him.

It was also Mary who told the police that Abraham had been sent to Agona Swedru Government Hospital.

The police PRO briefing Graphic Online’s Shirley Asiedu Addo said upon receiving the report, the police proceeded to the Agona Swedru Government Hospital and met Abraham Acquah, at the hospital's Emergency Ward with multiple deep cut on his left jaw, neck and shoulder responding to treatment.

Ms Oppong said police medical report form was issued to the victim for endorsement by the medical doctor.

PHOTO: 28-year-old Mary Quaye is in police grip for allegedly hacking the husband with a machete during a confrontation on Monday dawn.

It was at that point that the complainant, Mary, turned into a suspect, she said.

Mary has since been arrested, detained and assisting police with investigation.

Abraham Acquah, is an ‘Okada rider’ who lives together with the wife their two biological children at Nkumkwaa, a small village near Agona Duotu in the Agona East District of the Central Region.

Confirming the incident to Graphic Online, the Assembly member for Duotu Electoral Area, Mr John Kwesi Akyeah said that the young couple had had strained relationship for the past five months.

He noted that as a result, Mary left their matrimonial home and relocated to Awutu Bawjiase together with their two children with no intention of coming back, leaving Abraham in the village.

According to him, some neighbours in the village informed Mary that her husband had gone in for another woman and staying with her in the village which angered Mary who decided to bring their children to Abraham and leave afterwards.

He noted that Mary after returning the children decided to lurk around to find out if her husband’s new lover would come around which did not happen.

He said “late in the night when the alleged girlfriend came around, Mary suddenly showed up which resulted in a confrontation.”

Mr Akyeah noted that in the course of the melee, the new girlfriend who is yet to be identified managed to escape from the scene leaving the couple who engaged in a brawl in the full glare of their children.

He explained that Mary out of anger pulled a machete and hacked the back of Abraham’s neck and other parts of his body.

Abraham fell down in a pool of blood.

It was the neighbours who rushed to the scene and transported Abraham to the Salvation Army Polyclinic at Duakwa to receive immediate medical attention.

The Assembly member stated that due to the severity of the injury, he was referred to the Swedru Government Hospital where he is currently on admission responding to treatment.