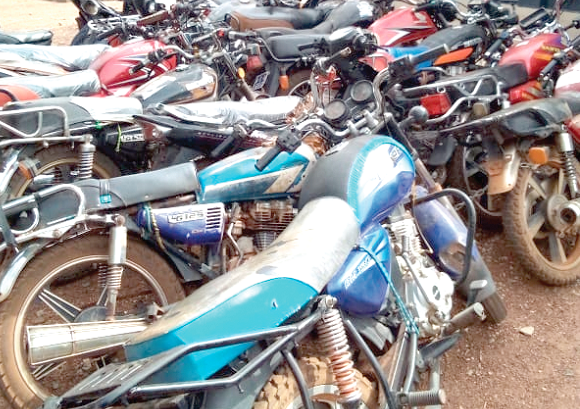 Some of the impounded unregistered motorbikes at the regional police command
30.5k Shares

In a bid to curb violent crimes, particularly armed robbery and the snatching of motorbikes in the Upper East Region, the Regional Police Command has impounded 107 unregistered motorbikes.

Out of that number, only nine owners of the motorbikes have presented their respective genuine documents and subsequently had their motorbikes released to them.

Records at the Regional Police Command also showed that perpetrators of about 75 per cent of violent crimes, particularly robberies, used unregistered motorbikes to commit the crimes.

He stated that the exercise was to enable the command to retrieve stolen or snatched motorbikes from some individuals in the region.

It was also to enable the command to determine genuine owners of the unregistered motorbikes so that tracking them in case of any crime could be easier.

ASP Fianko-Okyere further explained that the command was liaising with the Driver and Vehicle Licensing Authority (DVLA) and the Customs Division of the Ghana Revenue Authority (GRA) to validate the genuineness of the documentation before the motorbikes are released to their respective owners.

He, therefore, advised residents to stop seeking the help of opinion leaders to plead on their behalf for the motorbikes to be released to them because it would undermine the essence of the exercise.