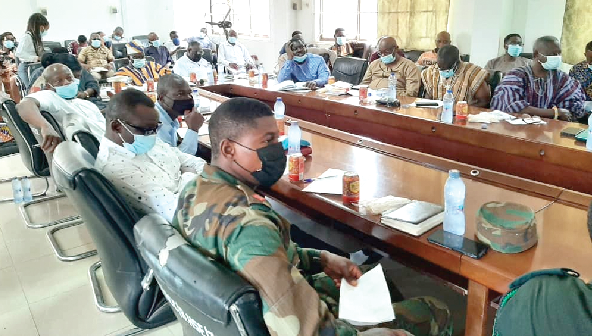 A cross-section of stakeholders at the Bolgatanga meeting on the Environmental Impact Assessment and Resettlement Action Plan Reports on the Pwalugu Multipurpose Dam project
30.5k Shares

The Volta River Authority (VRA) has met stakeholders in the Upper East Region on the Environmental Impact Assessment and Resettlement Action Plan Reports for the proposed Pwalugu multipurpose dam.

The meeting, which took place at Bolgatanga, was to seek the inputs of stakeholders and address concerns to form the basis for the final document that will be acceptable to all stakeholders involved in the project.

Briefing the meeting, the Deputy Chief Executive Officer (CEO) in charge of Engineering and Operations of the VRA, Mr Emmanuel Dankwa Osafo, said already studies, surveys and designs had been completed, while efforts were underway to complete all compensation and settlement issues as well as legitimate acquisition of the land.

“Together with other state agencies, we are looking at the areas that would be covered by the reservoir. On paper we have but we actually went on the field and plotted places on the ground so that everybody knows which areas will be affected and all these have been documented for the purposes of compensation and relocation,” Mr Osafo further explained.

Among those who attended the meeting were heads of department of the VRA, the Environmental Protection Agency, the Upper East Regional Coordinating Council, district assemblies, the Ghana Health Service and the Department of Agriculture.

The stakeholders engagement is part of the build up to the start of the actual construction of the $993 million project that is expected to begin this year.

In November 2019, President Nana Addo Dankwa Akufo-Addo cut the sod for the construction of the dam to serve as a permanent solution to the perennial floods being experienced in the region as well as generate electricity and promote irrigation driven agricultural activities.

For the flood control element, he said when the project was completed, the reservoir would be used to harvest the rain water to mitigate the perennial floods to save lives and property.

Mr Osafo said the electricity component of the project would be hybrid, consisting of both hydro and solar, in which two turbines would be installed to produce 59.6 megawatts of hydroelectric power and 59 megawatts of solar power, adding that it was the second of its kind in Ghana after the Bui Power Project.

He further noted that the project was making available 25,000 hectares of irrigable lands for agriculture production to create jobs and boost food security efforts.

“When we have water, we expect that the fishes will have a safe haven to live in and we can take full advantage of the fisheries potentials,” he said.

The Director of the Pwalugu Multipurpose Dam project, Mr Kwaku Wiafe, stated that apart from the re-construction of the road from Wulugu to Pwalugu (it is in a deplorable state), geological studies had also been conducted to ascertain the condition of foundation of the dam and identify sources of available local construction materials.

He said the land evaluation division had already completed a detailed assessment of the land affected in four districts and would continue with the rest of the districts so as to properly compensate, resettle and relocate affected persons and communities.

The Upper East Regional Minister, Mr Stephen Yakubu, stated that when the project was completed, it would be a mechanism to change the lives of millions of Ghanaians, especially in northern Ghana.

Mr Yakubu described the project as a “game changer” as it would not only improve the living conditions of the people through job creation and increased income levels but would further contribute to efforts of the country to achieve all the United Nations Sustainable Development Goals (SDGs).

He, therefore, called on all the stakeholders to play critical roles to ensure that “the project does not fail.”