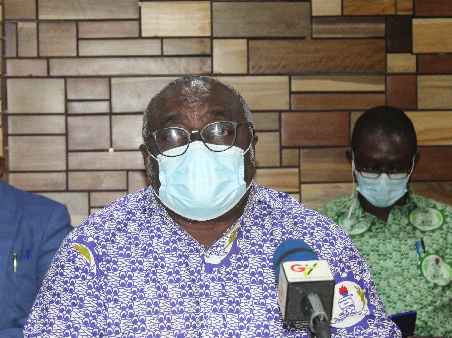 The Teachers and Educational Workers Union (TEWU) of the Trades Union Congress (TUC) has given the government up to September 7, 2021, to address the concerns of the non-teaching staff in public universities across the country to avoid disruption of academic work on campuses.

Its major concern is that the government and its agencies are “dragging their feet” to negotiate on a favourable rate of a non-basic allowance and exposure to eminent hazard allowance for the non-teaching staff.

“The workers we are fighting for are the least-earned workers as far as this single spine is concerned. Let us remember that they also contribute immensely to teaching and learning on our various campuses and deserve to have their concerns well addressed,” it noted.

Addressing the press today (August 24, 2021) in Accra, the General Secretary of the TEWU of the, Mr. Mark Dankyira Korankye, indicated that a Technical Committee set up to spearhead the negotiations wanted the government to offer the non-teaching staff nothing below 10 per cent for the allowance but the government offered eight per cent.

“After going through series of meetings, the government team continues to maintain its stance of offering eight per cent which was earlier offered by the Chief of Staff in January 2021. We find this posture of the government team very unwelcoming and not in sync with the tenets of negotiation”.

“We have come to this point where we want to send a strong signal to the government team and all the agencies that are involved in this negotiation that TEWU feels very much betrayed and frustrated in this process, since the negotiation of the Conditions of Service started and has travelled for over two years,” he said.

The General Secretary added that it was just not right, given the fact that the labour law was very explicit that negotiation should, in the worst case scenario, not travel more than three months.

Mr. Korankye expressed the displeasure that the non-teaching staff was not given the due recognition even though they played significant roles in the universities.

“We have on a number of occasions objected to the situation where stakeholders always think the issues of non-teaching staff are secondary when discussions on policies, conditions of service and other interventions take place at the educational sector. The impression is created as though only the teacher group is critical in ensuring a conducive teaching and learning environment,” Mr. Korankye added.

For his part, the National Chairman of the TEWU of TUC, Mr. Ambrose Yaw Kwadzodza, urged the government to consider the recommendations presented by the Technical Committee rather than “taking entrenched positions”.

“We were patient with government because we felt it was putting things in place but it has been months now and we cannot take it anymore. We are tired of these actions against our members,” he lamented.