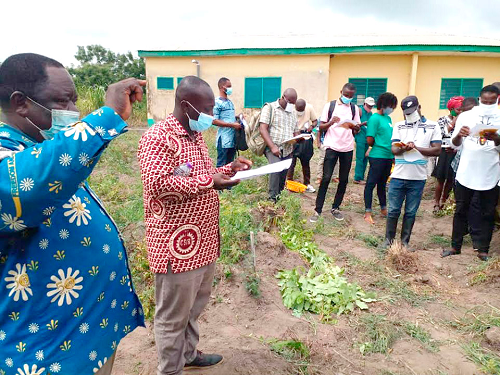 Tomato farmers in the Agortime-Ziope District of the Volta Region have been introduced to five new varieties of tomatoes to boost crop production in the area.

The five varieties have been developed by the Council for Scientific and Industrial Research-Crops Research Institute (CSIR-CRI), as part of efforts to increase the production of quality tomatoes with better yields for farmers across the country.

The new varieties are said to have the uniqueness of being resistant against the tomato yellow leaf curl disease, transmitted by white flies, which has no cure and causes a 75 to 100 per cent yield loss to farmers.

In an interview with the Daily Graphic at a demonstration farm at the district assembly earlier this month, the Senior Research Scientist and Vegetable Breeder of CSIR-CRI, Dr Michael Kwabena Osei, disclosed that the varieties were not hybrid but open-pollinated with higher yields which the farmers needed now.

The varieties, he said, gave 20 tonnes per hectare and as a result, enabled farmers to produce twice of what their local varieties produced.

Additionally, he said the crop matures within 60 days after transplant instead of the 90 days for the local variety.

Dr Osei said the varieties, like that of Burkina Faso tomatoes, have a long shelf life, which meant the tomatoes could stay for over two weeks without getting rotten, while the fruits and taste were also appealing.

“It has taken us about four years for this research to get this far with these varieties. Currently, we are ‘on farm stage’, that is giving the varieties to farmers for transplanting,” he disclosed.

The scientist said a demonstration of the varieties would be scaled up in other parts of the country including the Ashanti and the Bono regions.

According to him, the institute was not going to impose the variety on farmers but allow them to choose their preference among other varieties on the market.

The CSIR-CRI, he said, had what it took to stop the importation of tomatoes into the country, as it was committed to do quality research into crops but lacked funding.

He noted that much quality research had not been done on the production of tomatoes and other vegetables, leading to their importation from other neighbouring countries.

“Sometimes, we hear people ask where are the tomato varieties. I must indicate that we have been working. For previous years, the government and other international donors have concentrated on giving funding to staple foods like cereals, maize, rice and the rest. It is now that research work on vegetables are coming up,” he indicated.

With the expertise available, Mr Osei said the institute was opened to partnerships from organisations, individuals and donors to develop more crop varieties to increase food security.

“It took only one researcher from Burkina Faso to make a change in the tomato industry.  We at the Crop Research Institute can surmount our challenge of the importation of tomatoes if supported,” he stated.

He said all that the institute required was time to do its research and funds to deliver for farmers to be happy.

Some farmers expressed excitement at the new research and expressed the hope that it would solve some problems associated with the cultivation of tomatoes.

A farmer from Kpetoe, Emmanuel Dzikpe, who transplanted one of the varieties over six weeks ago, said he was happy with his crops and expected to harvest better tomatoes.