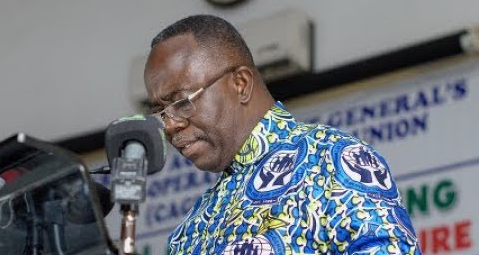 The Controller and Accountant-General’s Department (CAGD) has recovered GH¢3,129,135.58, representing 95 per cent of unearned salaries recovered within the reporting period of 2021.

The Controller and Accountant-General, Mr Kwasi Kwaning-Bosompem, who announced this, said it was the mission of the department to also protect the public purse in line with the effort by the government to curb corruption.

Mr Kwaning-Bosompem, who was speaking at this year’s thanksgiving and nine lessons and carols of the department at the forecourt of the treasury house in Accra, gave the assurance that the department would continue to promote the development of efficient accounting systems in all government departments.

“The government has invested heavily in the Ghana Integrated Financial Management System (GIFMIS). Some of the setbacks on the effective usage of the system has been connectivity. I want to assure you that the government is working assiduously to improve and deal with the connectivity issues.

Come the year 2022, no institution will have an excuse for the non-usage of the system”.

Failure to use the GIFMIS to process financial transactions, the Controller and Accountant-General cautioned, would attract the requisite sanctions.

He said the department had also commenced the review for the update of the chart of accounts and explained that was to align the chat of accounts to conform to IPSAS Accrual Basis Financial Reporting.

When completed, Mr Kwaning-Bosompem said it would facilitate the production of financial statements on full accrual basis.

Mr Kwaning-Bosompem said two universities, namely the Ghana Communication Technology University and the University for Development Studies (UDS) had been migrated unto the government of Ghana mechanised payroll and they continue to receive their monthly salaries since January when the migration was effected.

He pointed out that personnel processing sections had also been set up on the campuses of eight public universities with the training and migration slated to be done next year.

He used the occasion to thank all staff of the CAGD for their hard work, dedication and selflessness throughout the year and urged the staff to take advantage of the ceremony to reflect on their performance and seek the face of God as they anticipate the coming year to perform even better to meet the needs and aspirations of citizens.

The Controller and Accountant-General said inspite of the challenges that came with the COVID-19 pandemic, the CAGD remained undaunted, focused and continued to adhere to all the safety protocols and that enabled it to deliver on its mandates.

“We have not relented in ensuring that salaries are paid on time. We have throughout the year paid monthly salaries and pensions accurately and timely on the published dates,” he stated.

Touching on some of the achievements of the department in the year, Mr Kwaning-Bosompem said key among them was the upgrade of “the IBM Power 9 Servers” to improve efficiency in speed and stability. “We have also upgraded the Oracle database to the latest version 19c. This will provide data storage integrity and optimisation for transactions processed by government agencies and expose duplicates on updates to bank account changes,” he pointed out.

He expressed appreciation to the Minister of Finance, Mr Ken Ofori Atta and staff of the ministry for their continuous and unflinching support to the department, not only in the infrastructure upgrades at its data centre but also their support towards the national accounts preparation.

“The Third Party Referencing System (TPRS) upgrade, which was launched in May, 2021, has been completed. Sensitisation of Third Party institutions and government employees was also undertaken in July. Currently, the roll out of the upgraded system is ongoing. The ESPV has also been upgraded and validators in all the regions with the exception of the Greater Accra Region have been trained on the upgraded version,” Mr Kwaning-Bosompem pointed out.

He said 576 out of the number presented passed and were promoted.

“This year, promotion interviews are ongoing for 1,336 staff of different grades. This is heartwarming, considering the fact that until last year, we have had many staff who were on their same grade for over five years. The ongoing promotion interviews is a big source of motivation for my staff and I want to thank the Head of Service again for the various roles he played in this exercise,” he added.