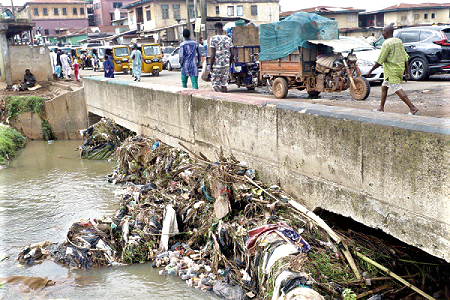 The state of the Pelele Bridge at Aboabo in Kumasi yesterday. Picture: EMMANUEL BAAH
30.5k Shares

Plastic waste, sand and weeds have filled the Aboabo drainage system in Kumasi, choking one of the main wastewater channels in the capital of the Ashanti Region.

With the continuous rainfall being experienced recently, the watercourse is now overflowing its space, threatening life and property.

The Aboabo drainage system is a critical part of the main Aboabo road that leads to Asawase, but is now posing a danger to the main road.

Currently, water has spilled over the bridge, popularly known as ‘Pelele’, at Aboabo, in the Asokore Mampong Municipality, depositing a heavy amount of waste, including plastics and glass, on and around the bridge.

An official of the municipal assembly declined to comment on record, saying he did not have the mandate to speak on behalf of the assembly.

He, however, told the Daily Graphic that an attempt had been made to clear the debris, but that the situation had not changed because debris from other sources were always washed into the drain.

“Until the issue is tackled from the other sources that make the waste find its way into this drain, it will not be easy to completely resolve it,” he said.

Yesterday[August 16, 2022], the stretch was flooded with filth, leaving space on just one side for pedestrians from the Central Mosque at Asawase connecting to Anloga Junction to the Kumasi Airport Roundabout enclave.

The situation worsened the already traffic-prone stretch, as it further impeded movement of motorists on the bridge.

Some residents told the Daily Graphic that the authorities had neglected the drain, saying they could not recall the last time it was desilted.

“We have been organising clean-up exercises periodically to desilt this bridge. Our efforts are not enough,” a resident said, and appealed to the assembly to dredge the drain in order to prevent the annual cycle of flooding in the city.

A 72-year-old woman, Maame Adiza, who resides close to the bridge, urged the city authorities to ensure proper mechanisation of the drainage system to ensure the free flow of rainwater to prevent flooding.

“It is their responsibility to deal with the sanitation challenges to discourage the dumping of waste indiscriminately and into drains,” she said of the assembly.