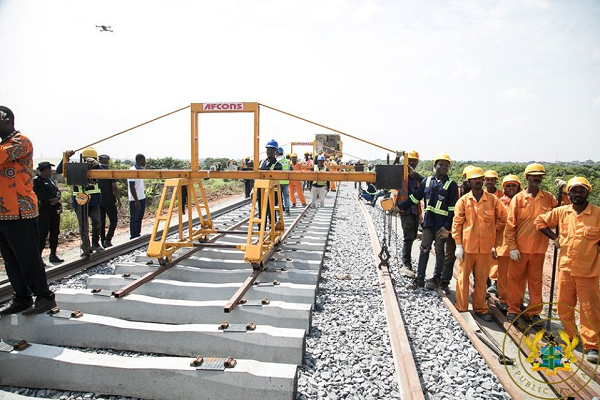 The Tema Port to Mpakadan rail line is expected to be ready by June next year.

The Kojokrom to Manso railway, which connects the Port of Takoradi, is also expected to be ready by the same period.

The two projects on the Eastern and Western corridors are 90 per cent complete and are being developed based on the new standard gauge that has a higher speed and axle load as compared to the existing narrow gauge.

The Tema Port to Mpakadan rail line is the first section of the Ghana-Burkina Faso railway line being developed from the Tema Port through Mpakadan, Kpeve, Hohoe, Jasikan, Nkwanta, Bimbilla, Yendi, Tamale, Paga to Ouagadougou in Burkina Faso.

The project is being funded through a $440 million Indian Exim Bank credit facility acquired by the Government of Ghana (GoG).

The remaining section between Mpakadan and Ouagadougou will be developed through a public-private partnership (PPP) arrangement, with the governments of the two countries currently engaging the private sector to develop the remaining section.

The Head of Policy Planning, Budget, Monitoring and Evaluation of the Ministry of Railways Development, Mr Godwin Gadikor, told the Daily Graphic that the projects formed part of the government’s plan to redevelop the entire railway network and expand it to the northern parts of the country in accordance with the Railways Master Plan.

Mr Gadikor explained that work on the 22 kilometres (km) Western line between Kojokrom and Manso into the Port of Takoradi was also ongoing.

He noted that work on the Manso to Huni Valley side into the Port of Takoradi was also on course.

"We are in discussions with various developers, investors and financiers to support the government to develop the remaining Western line from Kaase through Obuasi, Dunkwa to Huni Valley, as well as the branch line from Dunkwa through Awaso where there is an existing bauxite mine to Nyinahin where a new bauxite deposit has been discovered and being exploited," he stated.

He said the extension of the railway line to Nyinahin was to facilitate the mining operations there; adding that it was to ensure that there was a new standard gauge line between the port and the mining communities.

Mr Gadikor noted that the railway redevelopment project was to facilitate trade, create employment and reduce the impact of road usage.

Parliament approved GH¢512,575,692 in the 2021 Budget for programmes and services of the Ministry of Railways Development.

Chief among the programmes of the ministry has been the effort to revitalise and modernise the country’s railways system to facilitate efficient and effective movement of cargo and passengers.