Trunk roads dualisation begins: Will be completed in 2024 - Minister 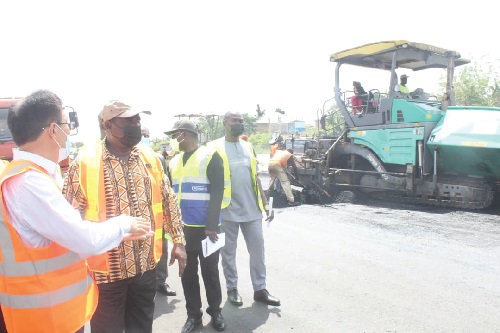 Ghana’s trunk roads will be dualised by 2024. The intervention is to make the roads safer and significantly reduce crashes and carnage.

Disclosing the major intervention to the media yesterday, the Minister of Roads and Highways, Mr Kwasi Amoako Attah, said Ghana had 13,367 kilometres of trunk roads, covering 33 per cent of the total road network of 40,186km.

The minister was inspecting the dualisation work on the Kwafokrom-Apedwa corridor in the Eastern Region.

It is recalled that around midnight on January 15, 2020, two buses collided at Dompoase, near Komenda on the Accra-Cape Coast-Takoradi road, killing 34 people.

On August 22, this year, another collision on the same road killed 10 people, with many others injured, making that trunk road prone to crashes due to its meandering single-lane architecture.

Construction work on road which is part of the Accra-Kumasi highway, started in March 2006 and it was expected to be completed in 2009.

Its completion date was revised to January 2013, but currently the 31.7-km road project is only about 65 per cent executed.

The dualisation project is being undertaken by a Chinese construction company, the China International Water and Electric Corporation.

“I want all contractors working on the trunk roads to double up, even if it will mean working in the night, because that is what is being done all over the world. The government is also making efforts to release money to the various contractors,” Mr Amoako Attah said.

“We want to avoid the terrible accidents being experienced in the country,” he stressed.

The minister said road crashes could not be prevented completely; however, dualising all trunk roads could prevent head-on collisions, which are a major contributory factor to road fatalities in the country.

The minister, who was visibly impressed with the work done on the road, commended the China International Water and Electric Corporation for its effort.

“You have worked excellently well and I thank you so much; you have almost completed his project and I am impressed. I’m here today to pat you on your back,” he said.

He further charged the company to double up its effort to ensure the project was completed before Christmas.

He said other contractors working on that stretch were also going to be challenged to double their effort to ensure the road from Accra to Apedwa was dualised before Christmas.

He observed that the traffic situation at Pokuase was intense, thereby rendering the recently completed interchange irrelevant.

Although the interchange had helped to address the traffic situation in the area, he said drivers still experienced some gridlock at Amasaman due to the single lane road.

“This is unacceptable; people must enjoy driving all through, so between now and Christmas, we are going to concentrate on this stretch,” Mr Amoako Attah said.

Giving more details about the work done so far, the Resident Engineer, Mr Apraku Amanor-Appiah, said the sub-base and the formation on the road were 98.90 per cent completed.

Per his estimation, he said, the work would totally be completed between March and April next year.

He indicated that there were some major works in the towns around the area, as well as at the various junctions.

“Those works can take us some time, so in my estimation, we should be able to complete the total project between March and April next year,” Mr Amanor-Appiah said.