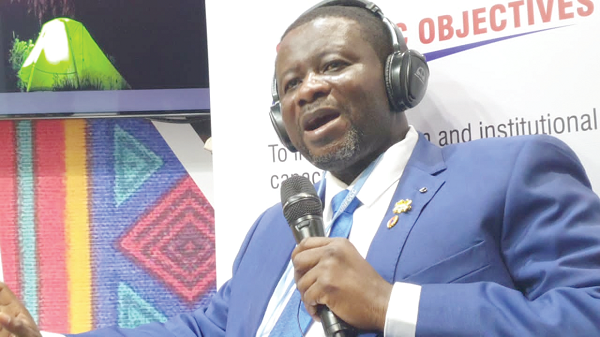 The African Union (AU) has given Ghana a certificate of good standing to benefit from an insurance system that will cater for farmers who lose their farm produce during periods of drought resulting from climate change.

That followed the country’s preparation and submission of all documentation required by the AU to qualify for the scheme.

The Director-General of the National Disaster Management Organisation (NADMO), Mr Eric Nana Agyemang-Prempeh, who made this known on the sidelines of the Climate Change Conference (COP 26) in Glasgow, Scotland yesterday, said the development was welcome news, especially for farmers in the northern part of the country who had had to contend with drought on many occasions.

He spoke at an event dubbed: ‘Disaster Risk Reduction and Climate Change’.

NADMO has mounted a photo exhibition at the conference to showcase its activities, especially with respect to battling climate change.

Giving further details, the NADMO boss said the AU initiated the insurance scheme for drought on the continent to deal with food shortages.

“What this means is that countries that are interested would have to bring their applications and documents that qualify them to be part.

So Ghana, represented by NADMO, led the way to prepare the documents and customisation, which were sent to the AU.

They looked at it and realised that we have done a great job so they have given us a certificate of good standing," he explained.

Mr Agyemang-Prempeh said currently it was left with the payment of the insurance premium, which would have to be looked at by Parliament.

"The Cabinet would have to look at it first for Parliament to approve it, and then the Ministry of Finance can pay the premium for us," he said.

He indicated that farmers would benefit from the insurance, no matter how small or bigger their farms were.

On the destruction caused by tidal waves in parts of the Volta Region, the NADMO Director-General sympathised with the people affected by the natural disaster.

"The tidal waves are the result of climate change, the rate at which the rainfall pattern has changed.

Some months ago, I was there to witness a similar issue, and it has happened again.

This is climate change at play and so I want to sympathise with the people," he said

He said the government was working towards assisting the people in the area, explaining that a team from the NADMO Headquarters was moving to the area with relief items to support the people.

Mr Agyemang-Prempeh expressed the hope that when the second phase of the Keta Sea Defence Project was executed, it would help address the problem.

He said an assessment of the situation was ongoing to establish the actual number of people affected by the tidal waves.

The Director of Climate Change and Disaster Reduction at NADMO, Ms Charlotte Norman, said the insurance was important to farmers, in view of the drought they sometimes faced.