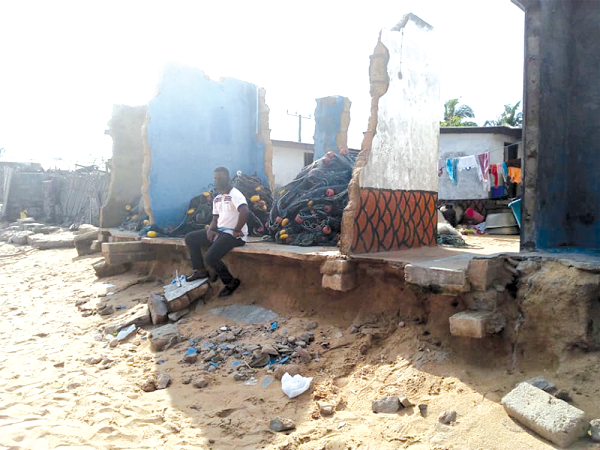 Remnants of houses affected by the waves

The tidal waves that ravaged parts of Anloga and communities in the Ketu South Municipality have receded to their pre-havoc levels.

Although the sea is calm, the residents are counting their losses and looking forward to receiving some relief items from the National Disaster Management Organisation (NADMO).

The acting Volta Regional Director of NADMO, Mr Ebenezer Azumah, told the Daily Graphic that some relief items, including food, mosquito nets and repellants, were being conveyed from Accra to the affected communities for onward distribution.

The powerful waves visited hell on several coastal communities in three municipalities and districts, leaving in their wake bare lands that were previously occupied by houses and commercial structures of inhabitants along the coasts.

Several homes were destroyed and thousands rendered homeless by the waves.

The perennial phenomenon recorded since the 1980s has been described by residents as the worst of its kind.

The disaster left the affected communities entirely flooded, leaving residents battling to salvage some of their property to safer grounds.

The impact of the waves affected women and children especially.

About 1,557 affected residents of Tamekloborme, Kedzikope, Abutiakope, Tetekope/Tetevikope and parts of Dzelukope in the Keta Municipality were still scooping water from their homes three days after the disaster.

The Chief Executive of the Keta Municipal Assembly, Mr Emmanuel Gemegah, said the area had been hardest hit due to the low absorption capacity of the sand in the area.

At Adina in the Ketu South Municipality, however, the community seemed to have partially revived itself, with lopsided wooden structures erected along the beach.

While communities such as Amutinu, Salakope and Agavedzi continued to reel under the impact of the event, economic activities at Adina were slowly picking up after the horrendous experience.

Several fishing canoes were at sea, while women scurried to and from the beach with pans of fresh fish, some telling the Daily Graphic that it was the only way they could feed themselves after they had lost several food items to the waves.

Fishermen mended their fishing nets in small groups under the shade of a wooden structure.

A few metres from the gathering lay old fishing nets of different colours in a huge heap, which 43-year-old Gavi, a fisherman, said was a small portion of several fishing nets swept away by tidal waves.

Mr Happy Gadagidigo and Mr Atsali Bosu, both fishermen, lamented their inability to continue fishing because their nets and other essential fishing equipment were lost in the disaster.

Mr Atsali said his source of livelihood had been affected and expressed concern about his ability to continue to provide for his wife and one-month-old baby.

Some residents expressed concern about the future of the communities, saying they risked being submerged.

The Regional Chairman of the Ghana Canoe Fishermen Council, Mr Seth Abotsi, indicated that factors such as indiscriminate sand winning contributed and worsened their plight.

Mr Abotsi, the Chief Fisherman, a resident of Adina and the Stool Father for the traditional area, opined that the Keta Sea Defence project must become a priority