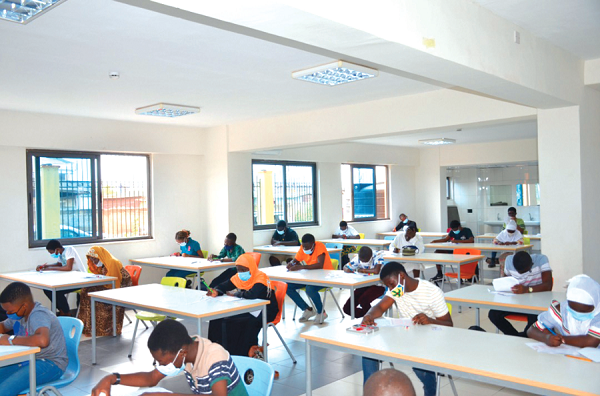 • Students will be looking forward to a good academic year with the resumption of school
30.5k Shares

Some parents and guardians are dreading the financial implications the reopening of schools will have on them just after the Christmas and News Year festivities, amid the continuous threat posed by the COVID-19 pandemic on livelihoods.

According to them, although the return to school after such festivities was not new, the negative impact of the COVID-19 pandemic compounded the situation, especially when businesses were yet to fully recover.

The parents and guardians, many of whom had their children and wards mostly in private educational establishments, said this in separate interviews with the Daily Graphic.

They indicated that unlike the past where they only paid fees after the yuletide, this time round, they were going to buy books, among other things.

In his 21st address to the nation, President Nana Akufo-Addo announced the reopening of basic schools on January 18, 2021, with the observation of all the COVID-19 pandemic etiquettes.

Schools were shut down throughout the country from March 16 last year due to the outbreak of the pandemic in the country.

Nana Adwoa, who works as a secretary, noted that the bill for her three children sent by their school was GH¢6,100.

She said the first child entering junior high school (JHS) form two was to pay GH¢2,700 while the other two entering classes five and three would be paying GH¢1,700 each covering school fees and books aside their feeding and transportation.

Asked what she would do under the situation, she said they would negotiate with the school authorities because, “we have been their customers over the years and they know what we all have been through for some 10 months now".

A seamstress, Ms Sarah Asiamah, who also has three children in primary and junior high school, wondered how she was going to handle the purchase of educational materials and the fees of the children.

She said although she was yet to receive the bill from her children's school, she was aware of what was going to happen in terms of fees.

When school was in full session before closure, she paid GHC 1,500 without books, uniforms, feeding and transportation.

"Now I am going to do all of this again just after the Christmas. Because of the COVID-19, I was not able to make money as people were not sewing.

“In fact, I am dreading the situation ahead," she said and pleaded with school authorities to understand the plight of their clients with the return to school.

A fruits seller at the Kasoa Old Market, Ms Ophelia Owusu, said the announcement by the President for  pupils to return to school was too  short to raise money.

With four children, she said sending all of them to school at the private facility at once would be difficult, adding that she might start with two and then send the other two later.

A single mother of three, Ms Cecelia Mensah, said under the current situation, private schools should be considerate in their demand for fees since people were now recovering from the devastating effects of COVID-19.

"I have to pay the fees and buy books for my children and it is not going to be easy. I have already called the head of my children's school and told him about my situation but he asked the children to report when the school reopens, hoping that things get better," she said.

A mechanic, Kwesi Obeng, with four children, said he would not be able to meet the school fees of his children and so "I have taken the decision to send my children to a public school. I have spoken to one of the heads who is my customer and he has agreed to help me".

His oldest daughter, he said was also going to the university and that alone was a problem, saying that he would do whatever possible to ensure all his children had education no matter the situation.

Mr Julius Ansah, a father of two, noted that he did not have much problem because his children were in a public school, adding that "for school, I don't have any problem and so I am not under any pressure".

His worry, was with the safety of the children but "in all, it is good that they are going back to school after sitting at home for more than nine months"

Mr Martin Ansah, a nurse at the Ridge Hospital, said he was not too concerned about the financial implications of schools reopening but that his problem had to do with the safety of the children, especially those in lower primary and pre-school.

He said the children were not mature enough to observe the COVID-19 protocols.

A mother of four, Mrs Sedi Kumi said in order to ease the financial burden of the reopening of schools on parents, the government should support the private schools in whatever way it could so that they also could  reduce their fees for the first semester.