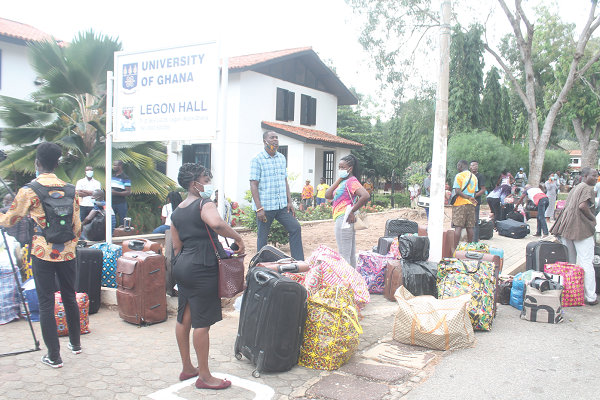 Some students stranded during the hall registration at the University of Ghana
30.5k Shares

Hundreds of freshers, some accompanied by their parents, yesterday besieged the residential halls of the University of Ghana to go through the residential formalities as the university opened its gates to them.

At the Akuafo Hall, Mensah Sabbah Hall, Legon Hall and the Porter Hall, the situation was not different, as parents engaged in arguments and sometimes confrontation with the officials attending to the students.

The huge numbers created congestion and confusion as they virtually threw the COVID-19 protocols, especially social distancing, to the dogs as they jostled and accused one another of either jumping the queue or intentionally being mischievous to create commotion.

The premises of the Standard Chartered Bank, where the students were directed to pay their Junior Common Room (JCR) dues and the refundable deposits, was choked with students and parents, making it difficult for security personnel to control the situation.

The rush to go through the registration procedures ended up creating heavy traffic on the Madina-Okponglo stretch as parents transported their children to the school.

The situation became worse from the Okponglo Junction into the campus as it is the only entrance for those who do not hold the e-card and non-staff of the university.

Explaining the situation, the President of the Legon Hall JCR, Mr Michael Boadi Ampomah, said the congestion was caused by students who did not gain access to accommodation on campus but still came with their parents, hoping to secure one.

Mr Ampomah explained that all those who sat in the open spaces and outside were those who did not get the accommodation and had come with the hope of securing it.

“They are the people that have actually made this place crowded. Those who are actually going through the registration are few. All those people sitting out there are parents who are seeking accommodation,” he explained.

Mr Ampomah explained that those who had accommodation were being attended to first and if there were available rooms, it would be the prerogative of the senior tutors to deal with.

He appealed to the freshers and their parents to calm down, urging that those who did not get accommodation to wait for those who were successful to be attended to “then we can see what can be done about that, but do not come here if you actually do not have the accommodation.”

One of freshers, who gave her name as Ewurabena, told journalists that she had earlier applied for a place at the Legon Hall, paid the fees, printed out her proof of payment, “but then, registering online again, I was told that the room was no longer available.

“So, I was told to report today and I have received a message that I have gotten a private hostel and so, am here to be guided because I do not know whether the earlier money paid would be refunded,” she said.

When contacted, the Dean of Student Affairs of the university, Professor Godfred Alufar Bokpin, admitted that the management had “great difficulties enforcing the health protocols,” explaining that it was basically because most parents travelled from all over the country to the campus, coming in at the same time.

He gave the assurance Tuesday, which would be the second day for the registration, management would be able to improve on the situation, explaining that it was because the entry onto the campus was largely unrestricted.

“Going forward, text messages will have to be sent to parents as a form of education,” Prof. Bokpin explained and gave the assurance that subsequently, management would better enforce some of the health protocols.

He reminded all that the university was not exempted from COVID-19 and therefore, appealed to parents, students and staff of the university to adhere to all the health protocols.

“Am appealing to all of them to let us do this as an honour to our country and the university as we observe all the health protocols,” Prof. Bokpin explained.

He added that the date for commencement of lectures for both continuing students and the freshers would be January 18.