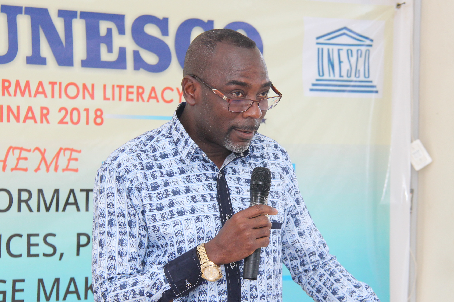 The Ghana Institute of Journalism (GIJ) will introduce entrepreneurship courses in addition to its core programmes to enable graduates to create jobs for themselves, the Rector of the institute, Professor Kwamena Kwansah-Aidoo, has disclosed.

This is to shift the focus from many of the graduates depending on securing jobs in the media to create jobs for themselves in other sectors of the economy using their communication skills and knowledge.

Journalists’ over-reliance on traditional media for employment has led to many of them remaining unemployed for a long period.

Professor Kwansah-Aidoo, who was said this in an interview with the Daily Graphic, said “we need to equip students with skills that will help them to survive on their own in entrepreneurial and digital skills".

He said it was important for products of the institute to be able to apply what they had learnt, particularly, outside the newspaper industry.

The rector explained that even though many people were moving away from picking a bulky newspaper to read, it did not mean that people did not want news or they were no longer reading.

"People want news and that is where the digital media comes in handy. There are other ways of surviving using your journalistic and other communication skills that you have acquired in school outside of the print media environment”.

"So, as an institute, we need to work at giving our students an education that will not only help them function in the digital era, but also enable them to become global in their outlook and place them at a level that they can actually become global citizens," Prof. Kwansah-Aidoo stated.

As a global citizen, a journalist could be hired by an international media organisation to work from Ghana, using the digital media space “and that is where the world is moving towards”, he posited.

The rector advised students of the institute to pay more attention to digital media aside from the usual writing and reporting in order to acquire multi-skills such as shooting and editing videos, explaining that many media institutions now wanted graduates who were multi-skilled and not just those who could read and write.

Prof. Kwansah-Aidoo said that was the thinking behind the GIJ digital media hub because digital news was now the global trend.

He expressed the belief that digital media was the way of the future across board, "for teaching, learning, research and production among others".

Speaking about the media landscape in Ghana, Prof. Kwansah-Aidoo expressed worry that most of the media houses did not apply the basic journalism principles of fact-checking and were often seen publishing stories that were one-sided.

"And because they are too many and are all competing for the same cedi, what that means is that they will do everything and anything for the money”.

“So, if sensational is what sells, they will go for it. They will cut corners, they won't verify stories even when they know it is falsehood, they will still print because what is likely to give them money,” he lamented.

Prof. Kwansah-Aidoo, therefore, advocated ways to check the conducts of media institutions and journalists, calling for an independent body that would hold journalists accountable.

The rector said the Ghanaian media was exercising power without responsibility and there was nobody to hold them accountable, insisting that the accountability should start with the media houses themselves in the understanding that the power that they wielded must be accompanied with responsibility.

He commended the country for its very good laws to ensure sanity but identified the lack of enforcement as the challenge.

“We need to find a way of enforcing the laws and sanctions that would bite to enable us to build a stable society,” he stressed.