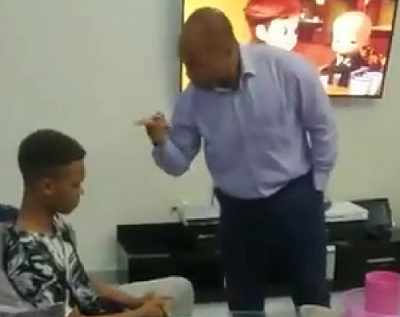 Twitter has gone into overdrive after an undated video was shared of a furious father meting out corporal punishment to his son for failing an exam.

"21k USD" is currently the top trend on Twitter some netizens have managed to piece the story behind it together.

The story has it that the boy refused to write the English and Mathematics exams at the American International School of Lusaka, Zambia, only for him to show up for the music exam after his father had spent $21,000 on his fees.

This is the full video of the 21K USD talk.#21kUSDpic.twitter.com/vkdy1Uwpr2

Admittedly, he passed the Music exam with distinction but his results in the other papers did not leave his father impressed.

In the video, the father is seen unleashing his anger on his son with several slaps.

''I told you this is a scar on your entire life, do you know the reputation this gives you? You can't read? You are a big boy you can't read?' The father said.

George Bester, the father who was slapping his son for having bad grades in the viral video, has been summoned by Zambia Police Child Protection Unit over child abuse concerns. He is the Senior Manager of Operations, Northern Region at MTN Zambia. pic.twitter.com/wunRuowpBv

A woman was recording the episode while begging the father to stop beating the boy, but the man faced her and said ''How can you say I should stop beating him, you know what this means..''

After answering the said woman, he then slapped the boy again and said ''You can't read, don't talk to me again' That's the result you bring to this house? Look at the result you brought? You idiot!"