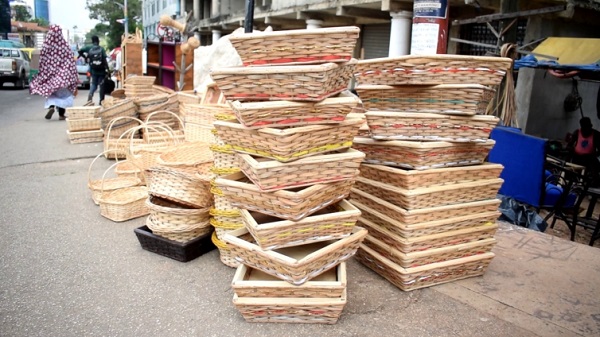 Christmas brings a lot of memories and togetherness among families, friends and colleagues.

It is a moment many people travel to their homes to be with their families and reconcile with gifts to celebrate the season.

Some businesses in the hamper value chain record increases in patronage ahead of festivities, and Christmas is no exception.

The woven basket is one essential item found in gift shops. They are used to package gifts.

In an interview with The Mirror in Accra, some basket weavers around the switchback road at Cantonment in Accra said that business had started picking up as Christmas approached.

One of them, Kojo Asamoah, said business had been encouraging, despite the increase in the prices of canes used in weaving the baskets.

“Business has been good so far, since the beginning of this month, despite the increase in prices of canes. There are days I make more sales, like selling 50 to 100 pieces of baskets in a day, while on other days, I make no sales at all. It depends, some days are good while some are nothing to write home about,” he said.

Another weaver, Richmond Asare, said when demands were high, he spent the night at the workplace.

“I sometimes have to spend the night here in order to finish up a request, that is, if I don’t have enough baskets. I can weave more than 20 baskets a day when I have enough canes. It has been over seven years and I have never regretted choosing this path to fend for myself, despite the daily challenges,” he said.

His colleague, Johnson Mensah, said: “The price of plywood is increasing steadily, though patronage has been encouraging. I do make losses sometimes, because by the time I take out the capital, nothing is left. You cannot put too much pressure to make profit. I am just hoping to cash in during this season,” he hoped.

Mr John Lamptey, who said he has been in the business for about nine years, observed that the demand this year was better than what prevailed same time in 2020 and last year.

He said: “Last two years, we made the lowest sales, but this year has been encouraging. I am able to meet demands when I have enough canes”.

Some retailers shared similar sentiments. Some of them at Osu in Accra had already stocked up gifts in the baskets, costing between GH₵150 and GH₵200.

One shop owner, who gave her name as Madam Joyce, said business had been a bit slow despite the approach of Christmas. Unlike the previous years, where we could even feel the atmosphere of Christmas, the situation is different. But I pray to make sales in the coming days,” she said.

With a lot of gifts around her, Sandra Appiah said patronage was very slow ahead of Christmas even though some customers were buying for weddings and birthdays.
She said most people preferred to buy the empty basket and put their own gifts in while others bought the packed baskets with the gifts.
“Due to the expiry dates, I do hampers on demand,” she added.