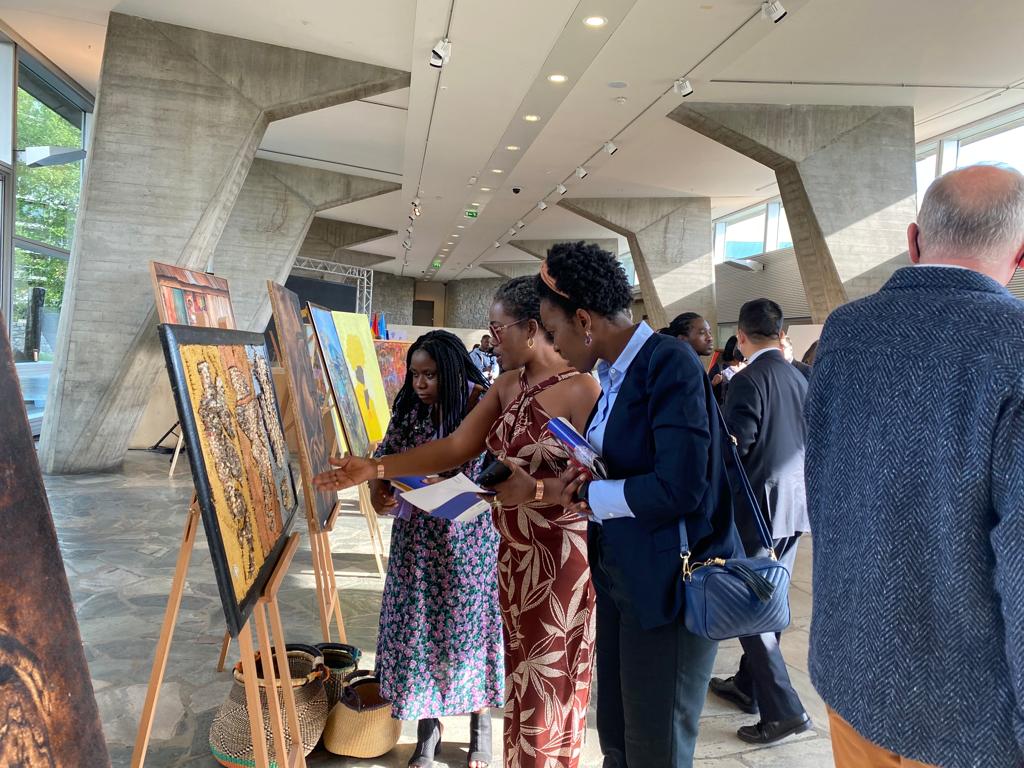 Ten Ghanaian artists are exhibiting their works at the third edition of Sound Out dubbed Accra in Paris which opened in Paris in France.

Sound out is a platform provided by the Ghana Export Promotion Authority (GEPA) to enable artists to display their works as a way of exposing African art in order to boost their trade on the local and international markets.

Artist, Kwesi Agyaye explains one of his artworks being displayed at the Sound Out exhibition in Paris pic.twitter.com/U6ZDDpLKll

The government of Ghana through GEPA paid for the freight of all the works of the artists from Ghana to Paris for the week-long event. 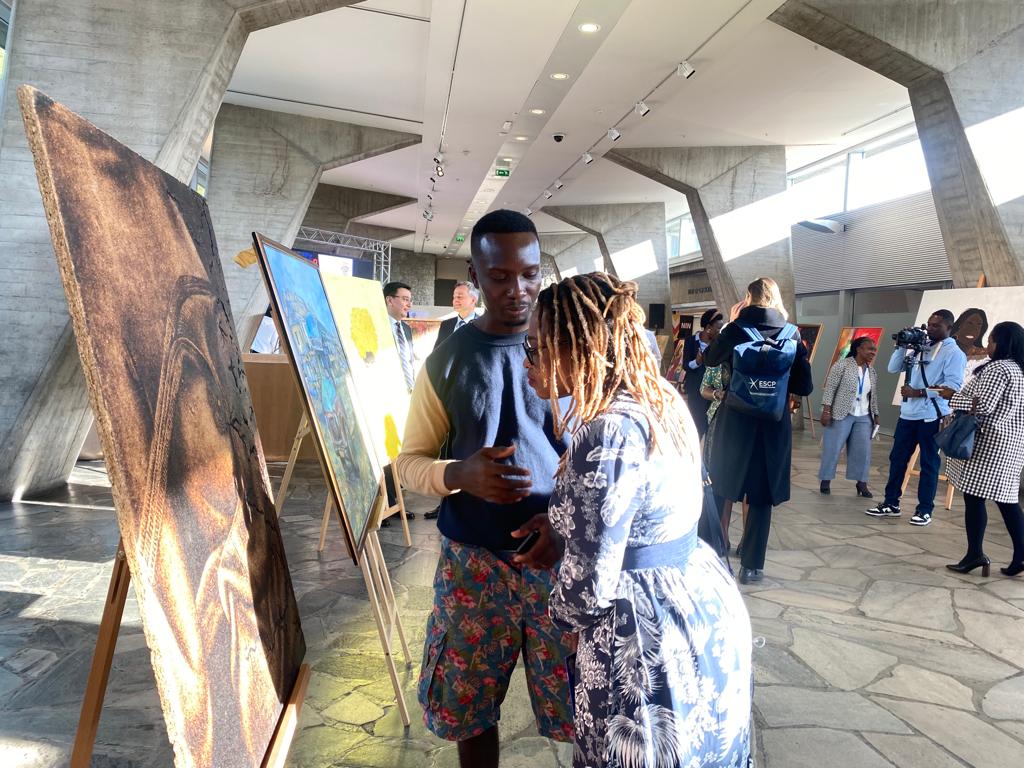 The United Nations Educational, Scientific and Cultural Organisation (UNESCO), the French Embassy in Accra and the Ghana Mission in France are supporting the organisation of the exhibition.

The platform aims at acknowledging and celebrating home-grown art to inspire people who have chosen to follow their talent in the field of abstracts, colours, oils and brushes for business or leisure.

The works on display are a variety of art paintings, mosaic, ceramic and hand painted pottery, basket ware, bronze sculpture and woodwork. 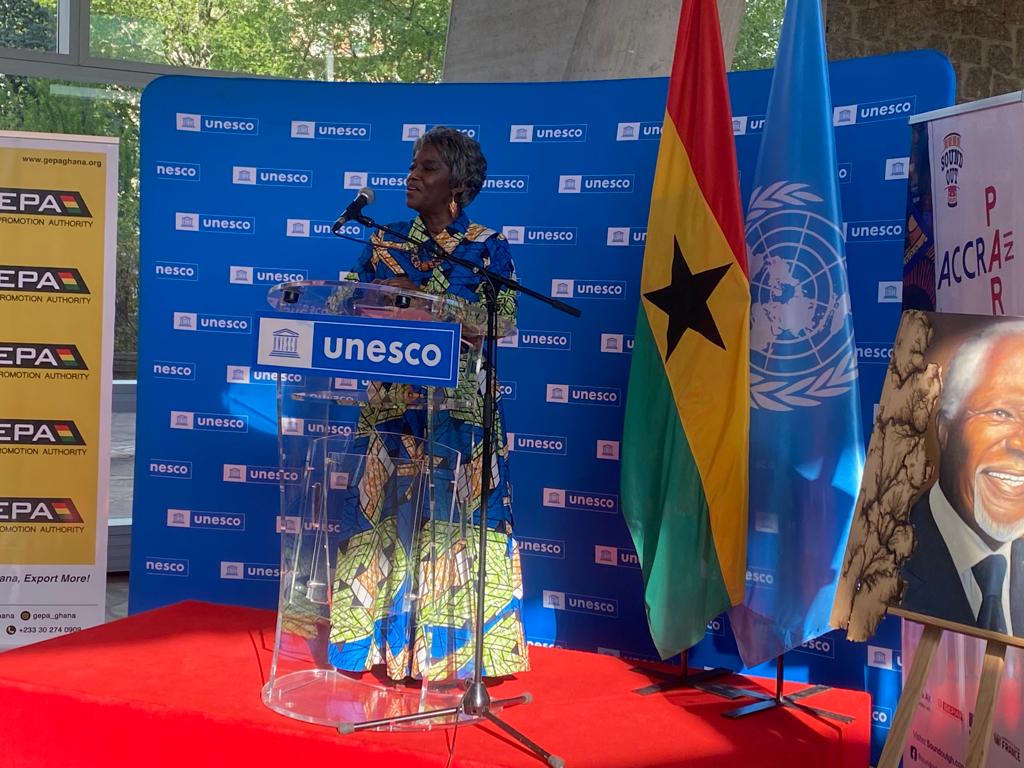 Ghana’s Ambassador to France, Anna Bossman who officially opened the exhibition on Monday [April 25, 2022] emphasised the importance of culture and creativity in Society.

She expressed the hope that the event would be held annually in Paris to promote the exposure of Ghanaian culture in France. 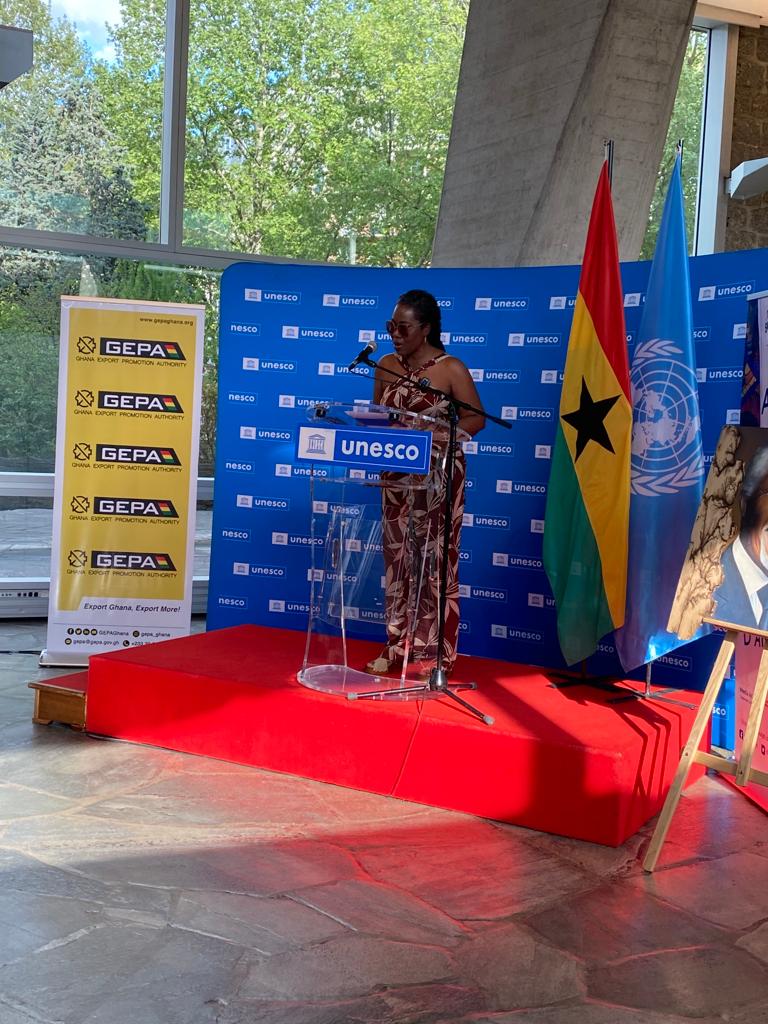 In her opening remarks, the Chief Executive Officer of GEPA, Dr Afua Asabea Asare who is one of the artists showcasing their works said the idea of sound out started as a tiny spark - the idea to positively impact others with what inspired the creativity of Ghanaian artists.

She said the exhibition was part of the efforts of GEPA to promote and develop products and services made in Ghana.

The CEO said the intention of the exhibition was also to “build the platform to a level where it becomes an annual art festival, moving from one location to another, across continents”.

She appreciated the efforts of organisations which supported GEPA to bring the exhibition to light. 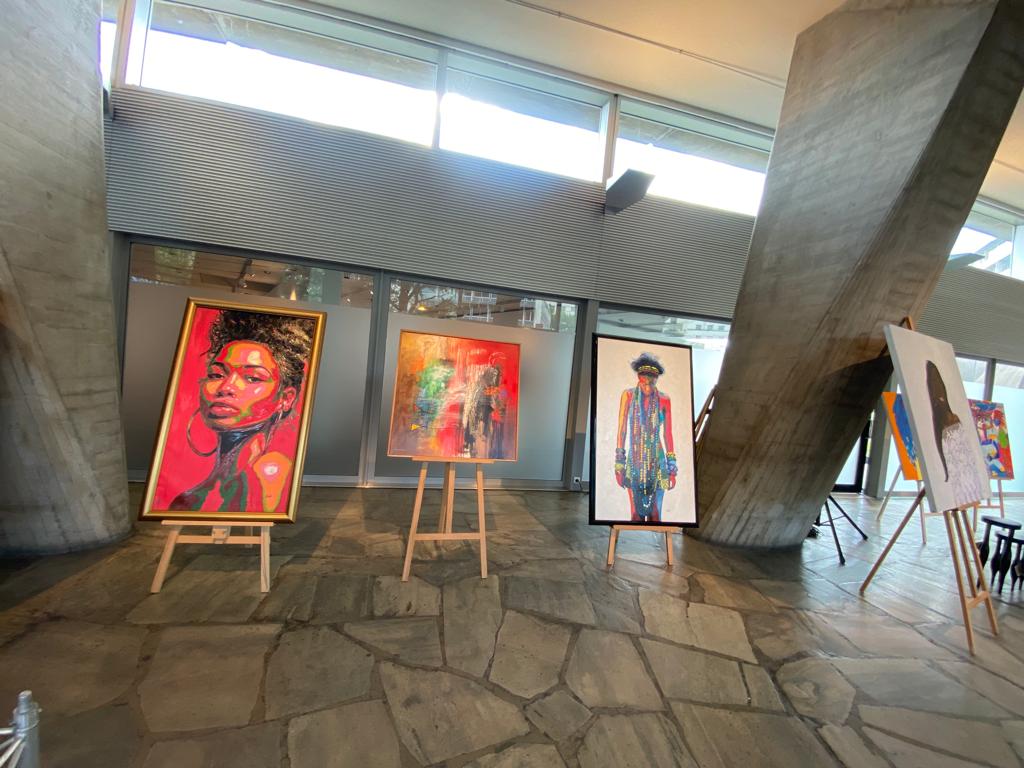 The Secretary General, UNESCO Ghana Commission, Mrs Ama Serwa Nerquaye-Tetteh, in her remarks noted that despite its significant benefits, the arts was a very vulnerable sector characterised by the lack of social security, unequal pay, gender disparities and in some cases censoring.

She said this greatly restricted people’s exposure to the diversity of cultural expressions from around the world at a time when there was a compelling case that diversity was a structuring element for social cohesion and peace between peoples.

She said UNESCO Ghana supported resolutions that sought to create an enabling environment for artists.

Profile of the 10 artists exhibiting their works at the second edition of Sound Out underway in Paris, France.

The week-long exhibition being organised by Ghana Export Promotion Authority (GEPA) which opened today aims at attracting more patronage for the works on the international market. 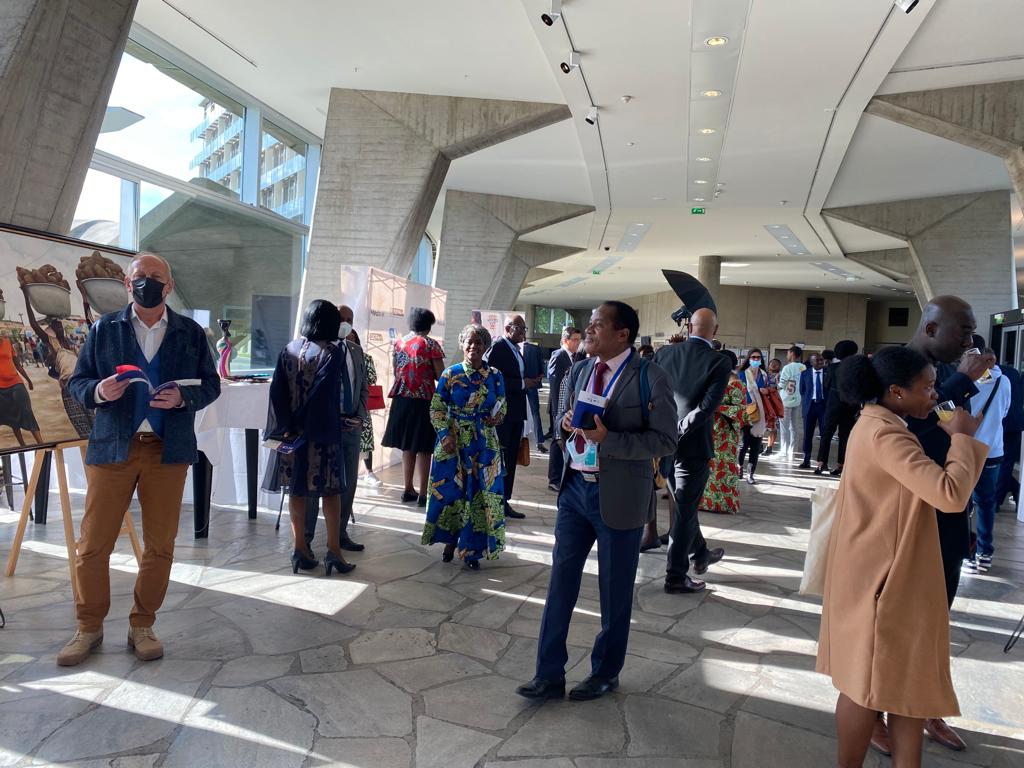 She holds degrees that have little to do with the arts and is a self-taught artist who has passion and joy for discovering answers to the complexities found in the works of past masters of art and strives for similar quality in her work. She has loved working with any idea that pops up and experiments with everything she gets hold of since she was a teenager. 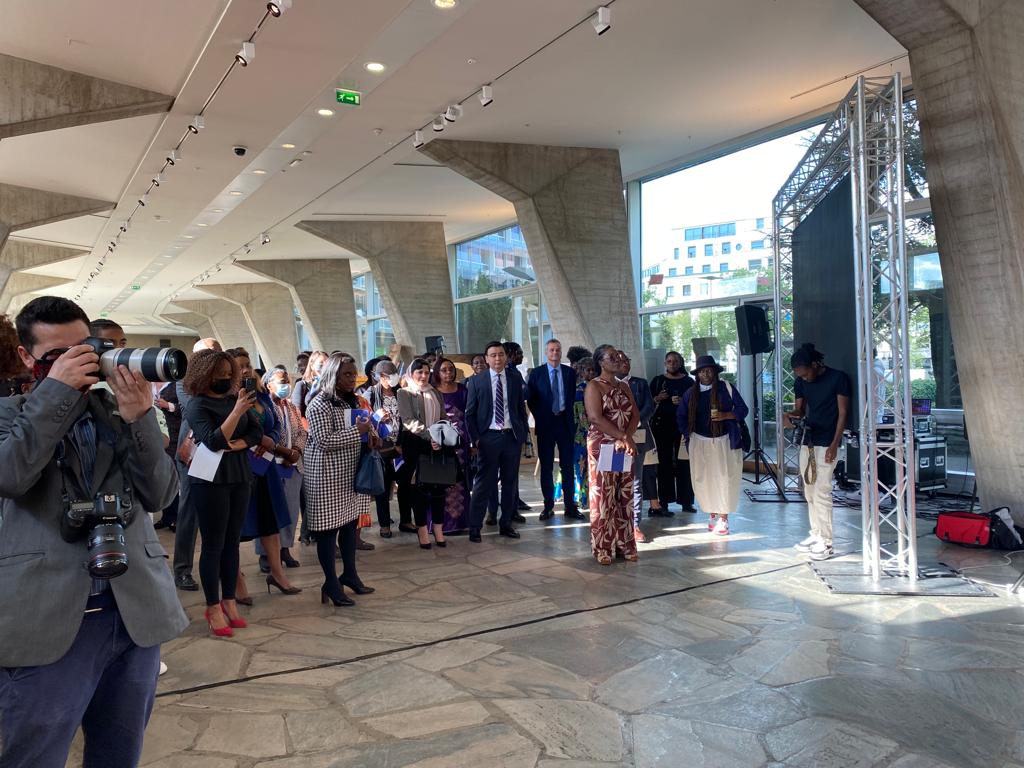 Her works are visions of order in the universe and her peaceful places. She feels calm making them and hopes making them will bring some satisfaction into the lives of others.

She has participated in many local and international exhibition including Milan in Italy and the United States of America. Her work can be found in The Faith Gallery in Brooklyn, New York.

“Kwesi Agyare”, (as he is known by his signature), is one of Ghana’s prominent artists.

He uses various forms of media and materials to create visual images of the dynamics of life in contemporary Ghana. He has received critical acclaim both locally and internationally.

He says “My innovation and creativity are driven by things I see, my feelings, and trends in the art industry. I begin expressing my views and opinions through my colours showcasing various themes that explore the reality of life in Ghana”.

He has produced works that are now in the homes of private collectors, hotels, offices, and Libraries. KwesiAgyare artworks are displayed in a popular Ghallyhood movie, “The Perfect Picture”

His travels transformed his work even more and have given exposure to the elegant beauty and the delicate nature of human sign languages, and intercultural social life through paintings of beautiful African symbols. “I love art because it is a total expression of life, you can tell a story by just putting it on ink without saying any words, and people can relate and appreciate.”

He is one of the most renowned painters in Ghana currently and describes himself as a contemporary traditionalist.

His subject matter is inspired by the everyday activities of ordinary Ghanaians. He paints “to record and preserve our traditions visually.”

The vivid flecks of acrylic fill his huge canvases, their vibrant hues combining to form dazzling African scenes, scenes that Otoo says are impossible to replicate. His subjects include traditional group drummers, dancers, and market crowds.

The evident interest in music is wildly apparent in Otoo’s work. His figures, occasionally almost cartoonlike, break down into abstract rhythms, invoking jazz. Otoo holds a master’s degree in African Arts and Comparative Literature from the KNUST. He’s been making art since he was a child and would often be scolded for drawing in charcoal on walls. Currently, his paintings decorate Ghana’s presidential suite and Ghana’s Chancery in Washington D.C

Moh Awudu is a contemporary versatile fine artist born and raised in Nima, a suburb of Accra. He focuses on the sensual nature of art, aiming to influence positive behaviours using murals, graffiti and traditional paintings. Some of these paintings located in strategic places in Accra are used to raise awareness on issues such as child labour, education, child trafficking, sanitation, and teenage pregnancy among other social vices.

Genfi is a prolific self-taught artist who has mastered his craft over the past 20 years. He has been an art lover since childhood with a natural ability to sketch the everyday beauty he sees in the world around him. In his early years, he had dreams of becoming a professional artist, but this dream was deferred.

Kwaku continued to keep a pulse on the art landscape through his established relationships with fellow artists and creative designers. In the early 2000s, Kwaku picked up his paintbrush and created masterful pieces using his medium of choice: acrylics and oil paints. His work captivates audiences by depicting the extraordinary beauty and uniqueness of ordinary people and the rich and vibrant culture of enclaves in Ghana. His work gathered success and acclaim in the US as demonstrated by his solo art exhibit sponsored by the Visual Arts League at the East Brunswick Municipal Building. After taking an early retirement from the Hospitality business, fellow artists convinced him to start painting again in 2020. With the world in lockdown due to the global pandemic, Kwaku got back to work. He painted relentlessly during this time and several months later dazzled the public with his return to the art scene with a three-day solo art show in Ghana.

Amartefio has been painting for over 36 years. He is also a sculptor, a poet, and a writer. He has had several art exhibitions home and abroad and was the ACRAG award-winning artist for the best painter in 1999.

Currently, he spearheads the “Accra for Art” initiative which is a branding project for the beautification of Accra by the Accra Metropolitan Assembly. His poetry has been published in many newspapers and on social media as well as in the Obsidian Journal of Literature and the Arts in the African Diaspora.

Bright Danso is a young Ghanaian artist who makes some of the world’s best rare artworks with fire. His kind of art is called Pyrography which is quite rare in Ghana and many parts of the world. Apart from using fire to bring out the bright and attractive images that inspire creativity, he is a sculptor and a painter as well. His work is an inspiration for many especially art lovers across Ghana and he looks forward to becoming a globally recognised Pyrographer. He is known to have created the first-ever Pyrography table called the “Legacy table”. This got him thinking and led to his new project which has to do with using heat to decorate wooden furniture.

He is one of Ghana’s contemporary and prolific painters and has been painting professionally for almost 40 years. As a colourist, his works span several techniques and styles. He is a past student and lecturer of the Kwame Nkrumah University of Science and Technology, Kumasi - Ghana, and a former visiting lecturer at Kenyatta University, Nairobi – Kenya, Martin has exhibited in several countries including Ghana, Kenya, the USA, the Netherlands, Japan, and Germany. After spending several years in Kenya, he now lives in Accra. Martin spends his time teaching and painting.

Nana Yaa is a trained journalist, a graduate from the Ghana Institute of Journalism, and worked with the Ghanaian Times for over five years. After sojourning in the UK for some time, Nana Yaa returned and worked with a Swiss Company as Public Relations Director in charge of the entire conglomerate, UTC. She infused so much creativity into any and everything she did and has had several stints in many professional capacities during her working life. Nana Yaa is the CEO of Corporate Varieties, a company that sources and brands gifts and promotional items for corporate institutions. Recently, while recuperating from a health condition at home, she created a painting out of her circumstances and Marquisates was born.

The fluidity of acrylic paints allows her the freedom to express herself in rich colored abstract art pieces. Since then, she has had two successful exhibitions, with the first one being sold out just in a day.

Rojo Mettle is an Art student of Kwame Nkrumah University of Science & Technology and University of Ghana where he earned his first and second degrees respectively.

He has held various portfolios in academia, private sector and government appointments over the years. Key among these are the following: • Board Member, University of Ghana Medical Center Board • Ag. Managing Director, Sewerage Systems Ghana Ltd. • Deputy Minister of State (Ministry of Health) • Deputy Minister of State (Ministry of Roads and Highways) • Policy Management Group (Office of the President, Ghana) • Educational Policy and Development Partners Consultant to ACTIONAID (UK NGO) and UNESCO. 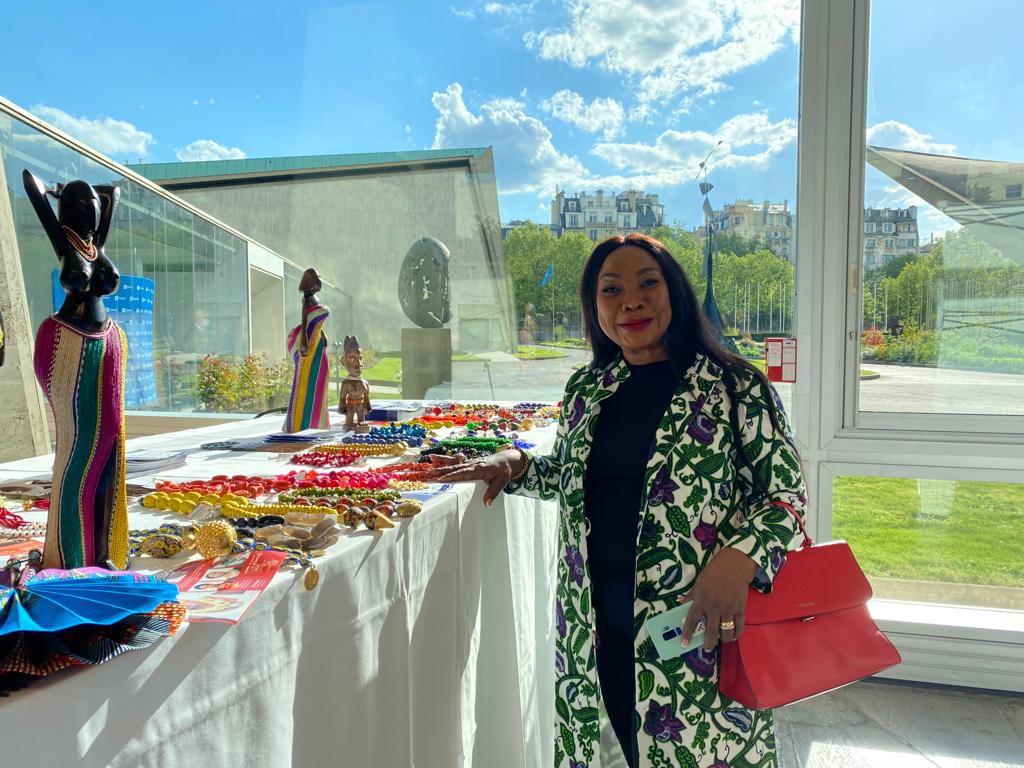 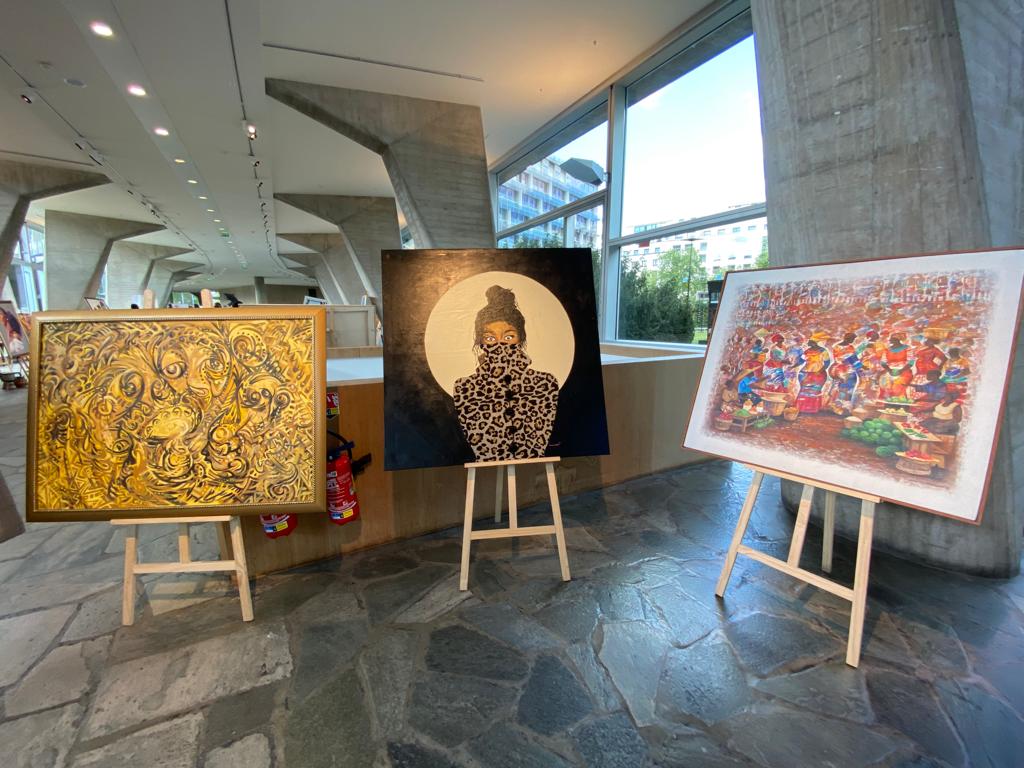 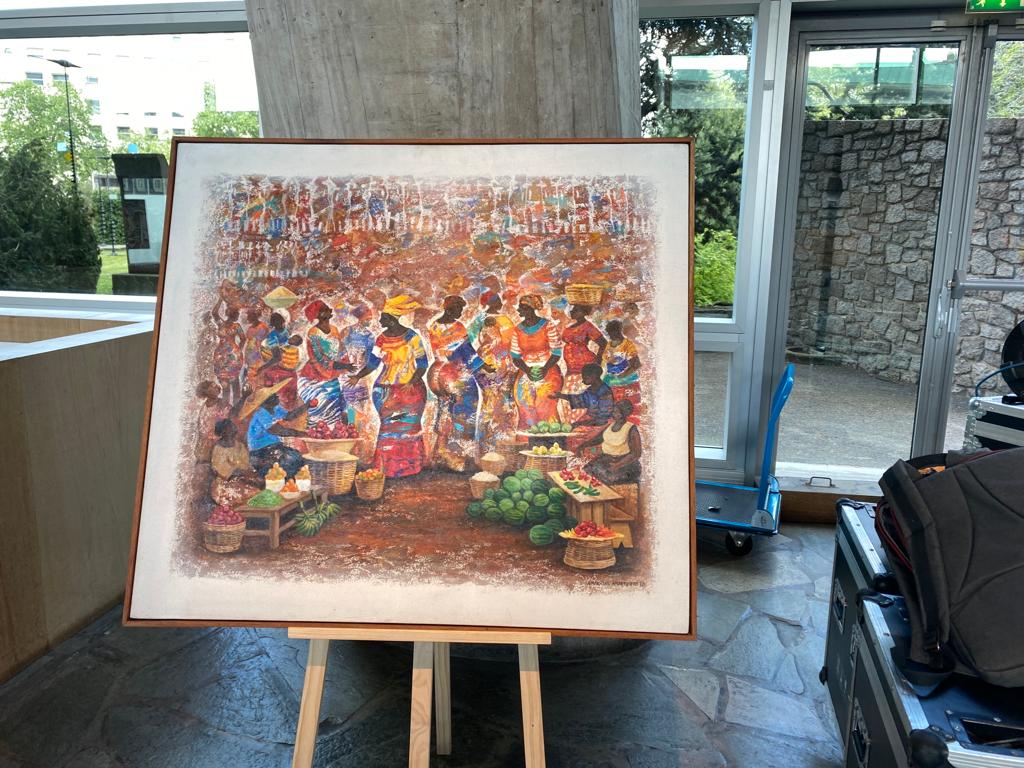 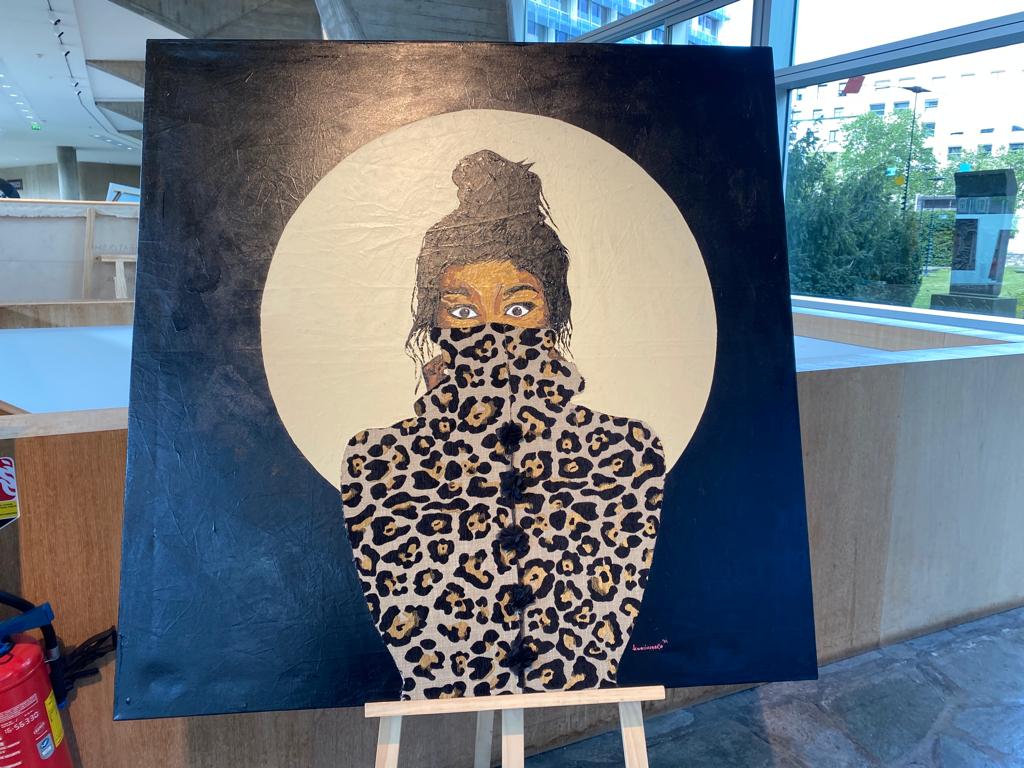 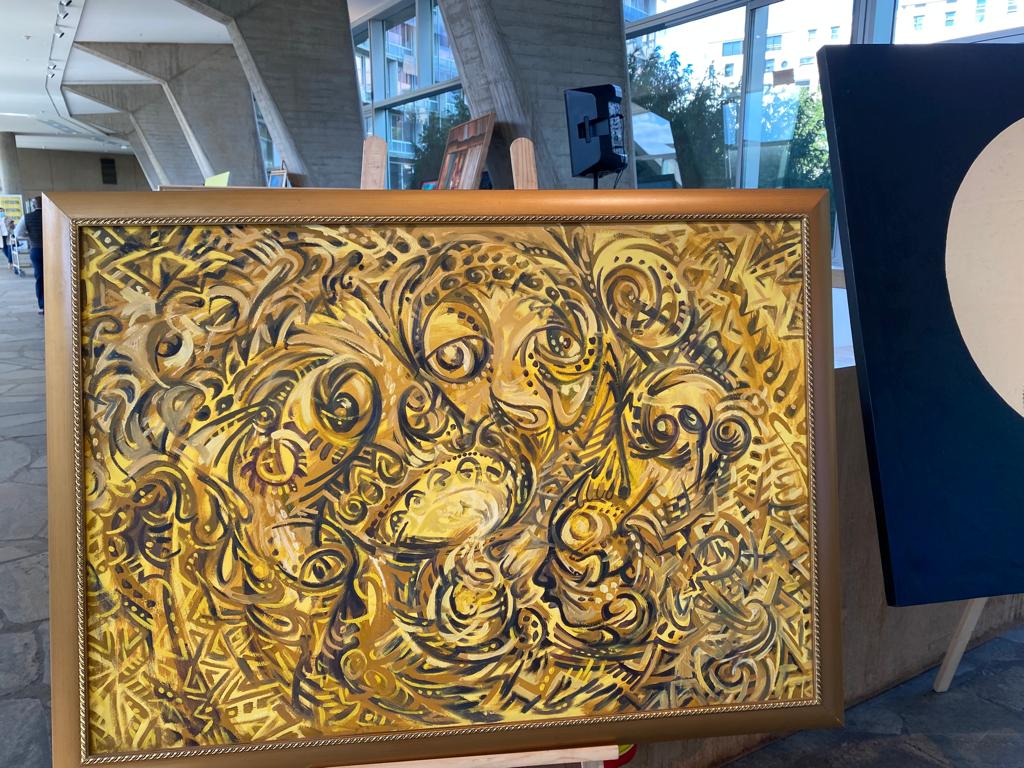 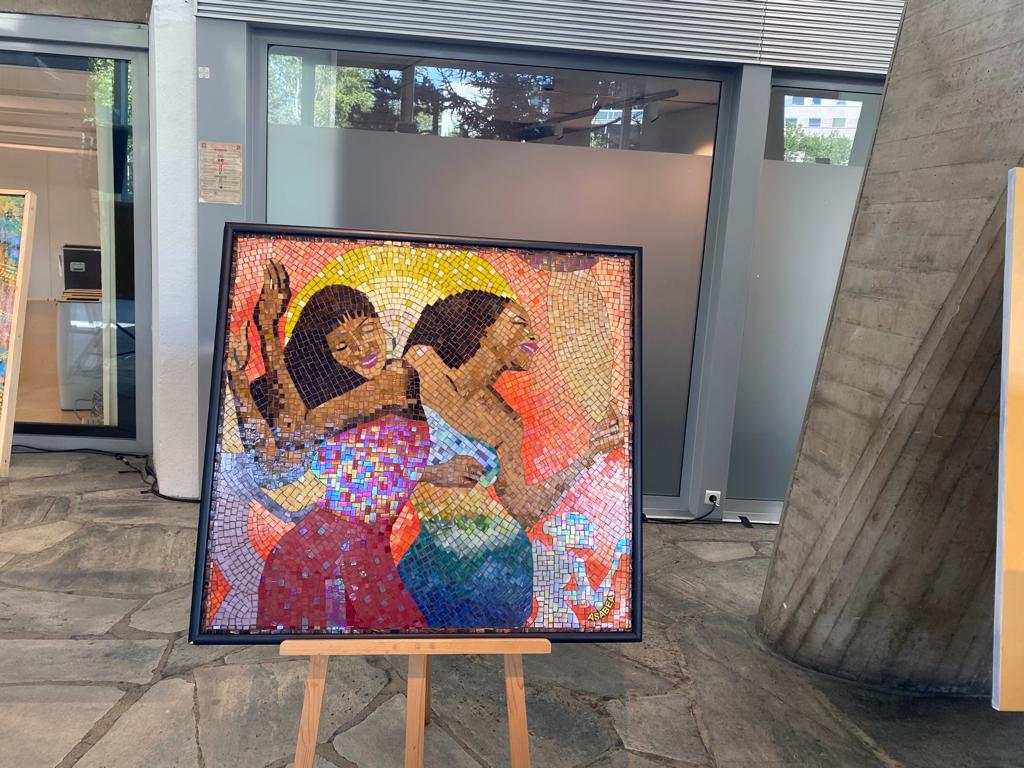 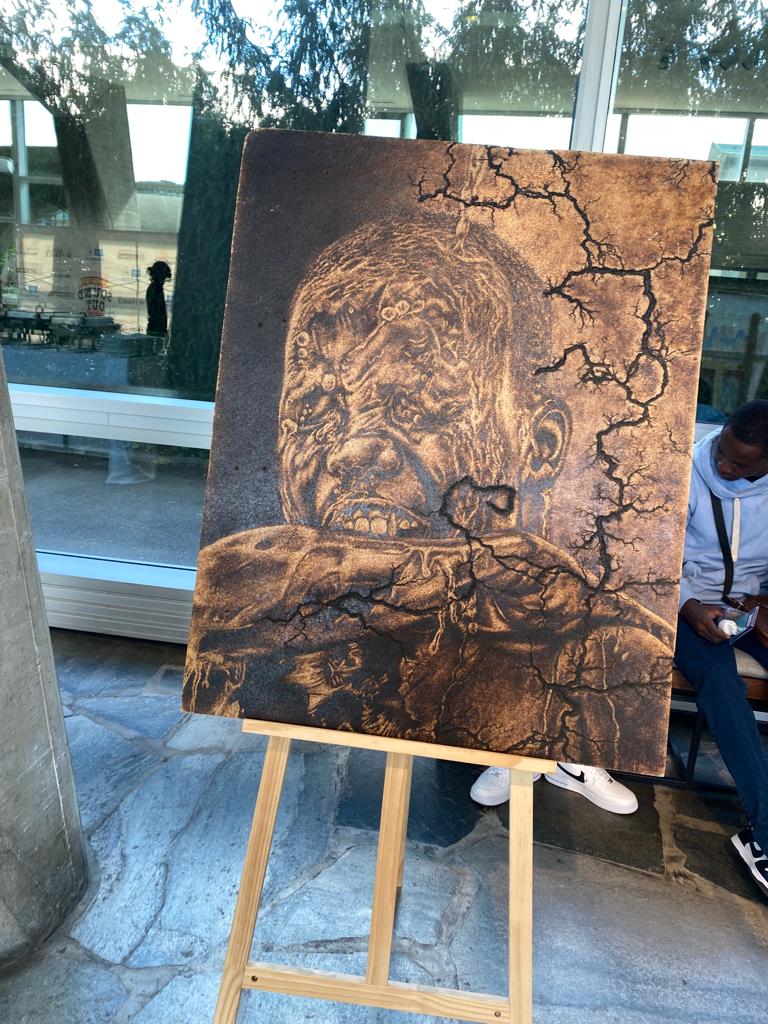 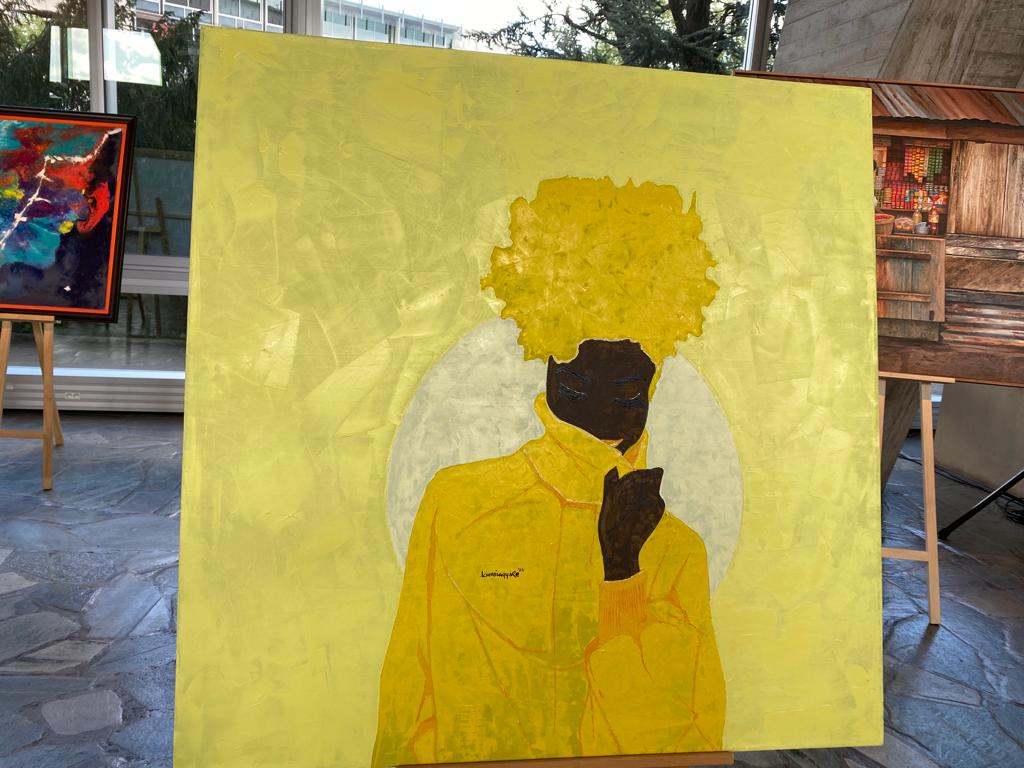 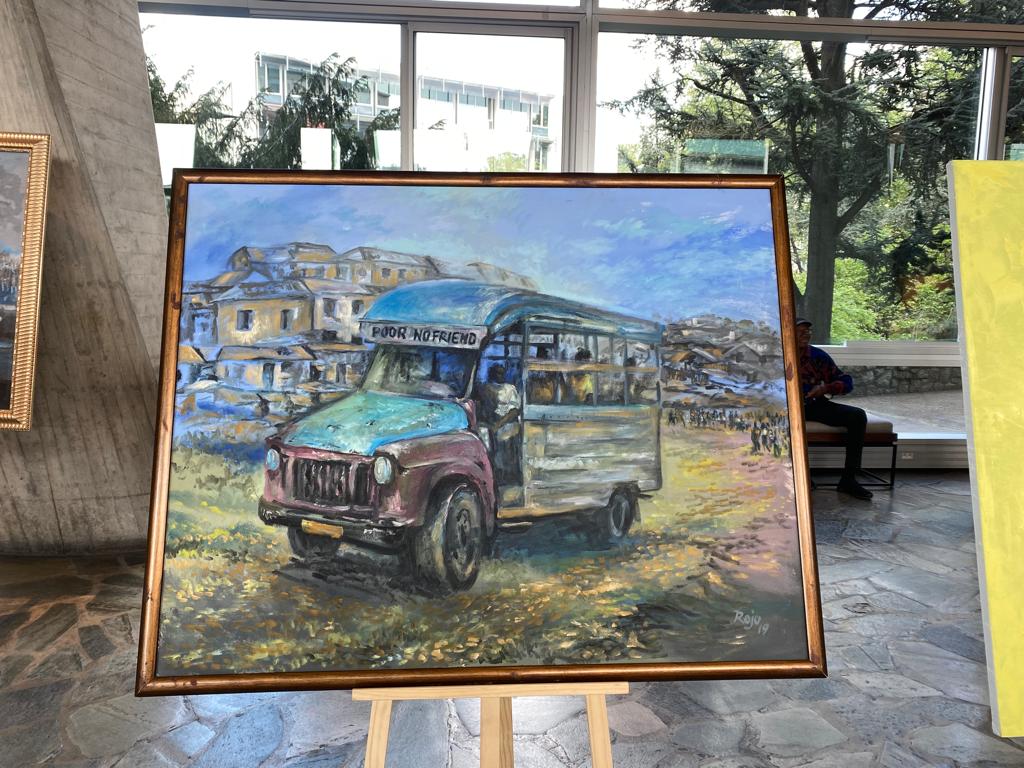 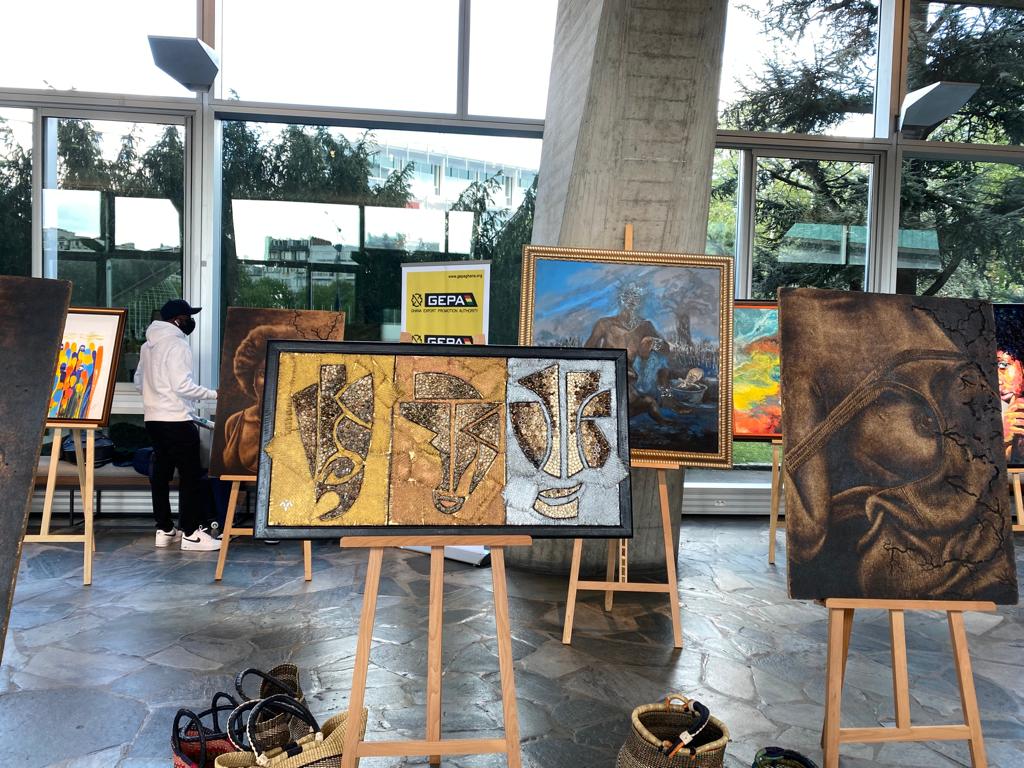 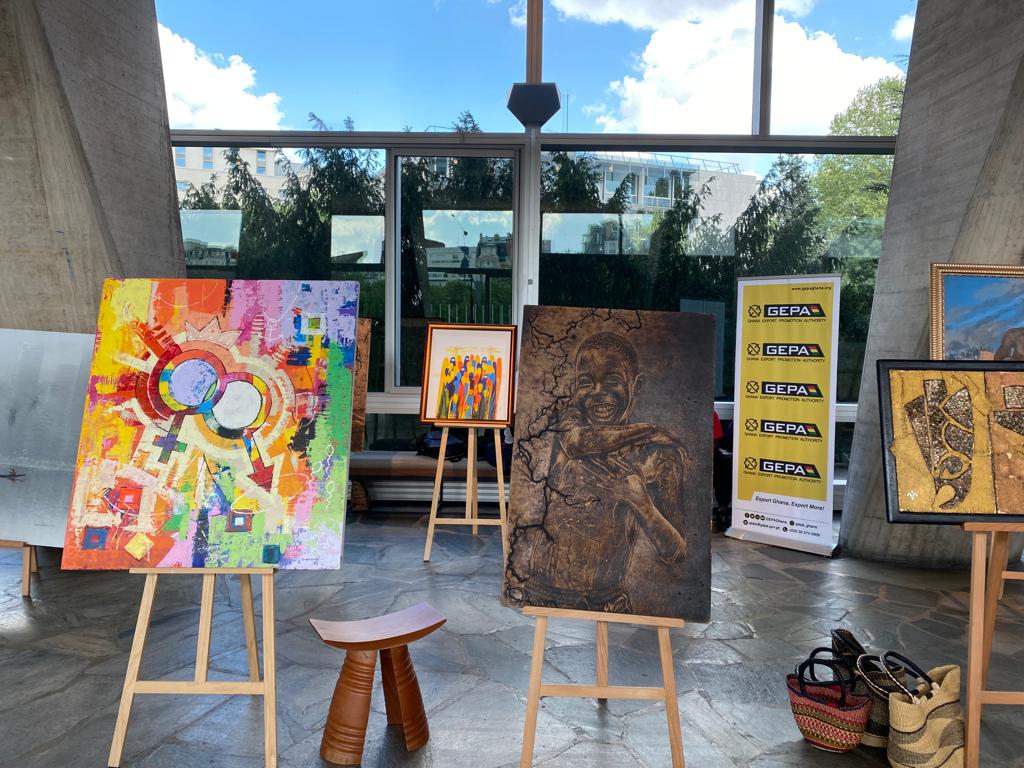 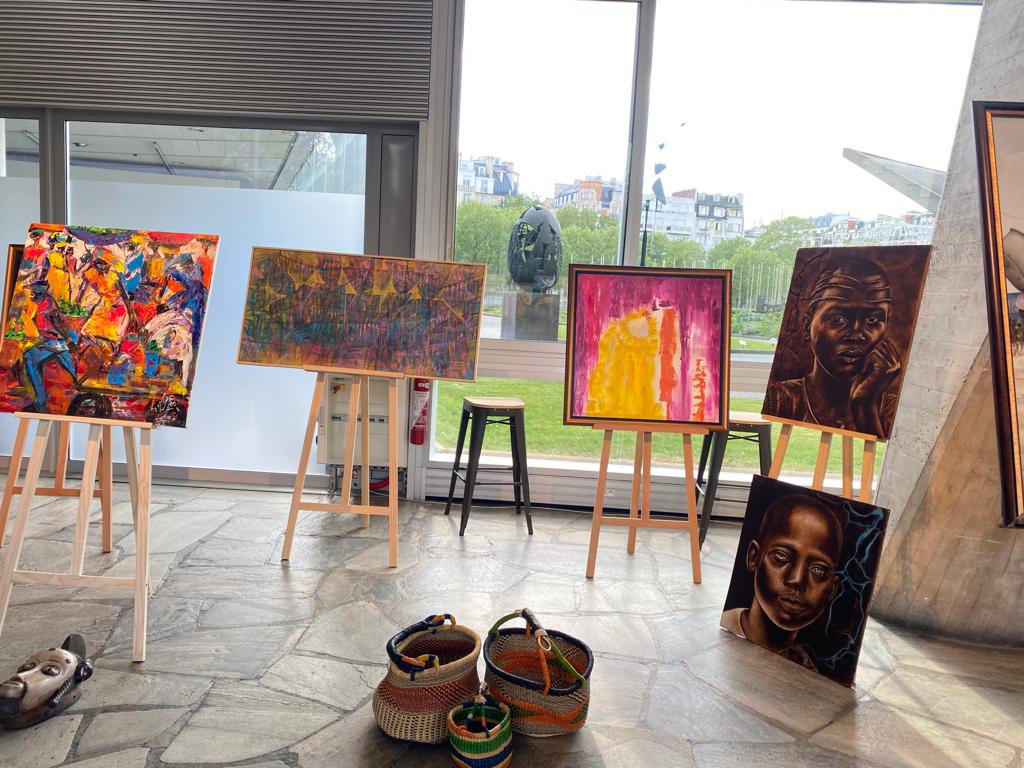 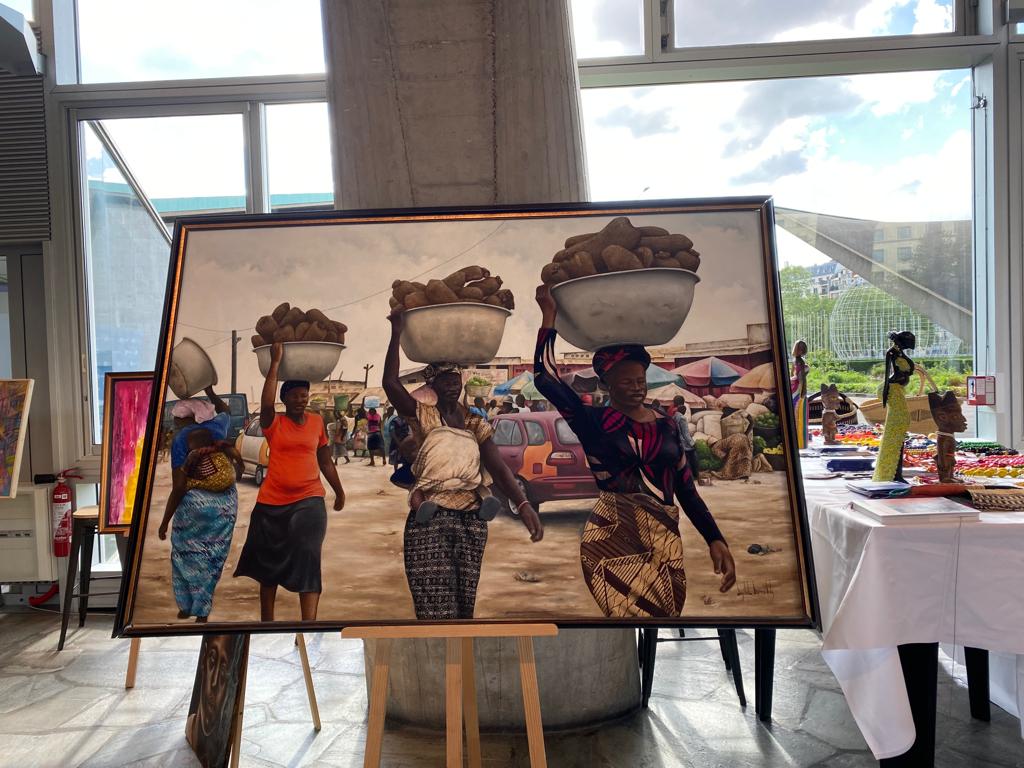