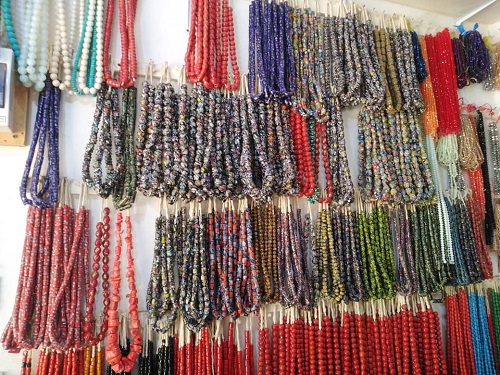 The Eastern Region is known to be the most dominant region when it comes to bead making and selling across the country and beyond.

Beads are fundamentally part of the Ghanaian heritage in its creativity and in the role it plays in the history of Ghana.

The country is blessed with many talented people who are into bead making.

However, the Eastern Region has gained a lot of attraction over the years and has kept the business going, with different kinds of beads on the market and outside Ghana.

The majority of beads produced come from the Ashanti Region and Krobo people in the Eastern Region who occupy the Akuapem Mountains.

The craft is often based on a family tradition which is passed on from one generation to the other, using mainly handmade techniques which have unique designs and charm.

Junior Graphic spoke with a fifth generation bead merchant who took over from her family, and the business is ongoing.

Mr Mohammed said when the bead market started in Koforidua, there were no markets and they were not exposed to the general public like we see today.

Our parents used to cover the bead with clothes and wear them around their neck on occasions such as festivals, marriages, among others.

He noted that beads are special and were seen in those days as spiritual, for which reason many people did not want to have anything to do with them.

In those days too, in our movies beads were portrayed as signs of bad luck when women were seen receiving beads which resulted in misfortune for them.

The kings, queens and queen mothers were the ones who usually used beads in those days. The beads were not also attracted to the eyes as we see them today. They were used during funerals and traditional marriages.

The Ashanti beads could not travel far because there was no creativity and no value added to their market which made people lose interest in them.

On the other hand, the Krobo beads are well known because of the variety in size, shape, colour and design which had made it the best not only in Ghana but on the West African market.

Koforidua is privileged to be the centre of the beads market because it is the regional capital so all the towns surrounding it produced and brought the beads there for sale and that was why the market grew both in Ghana and Africa.

It was only around 1921 when the Koforidua market was built that they were given some space from which they could get about 10 shops.

Producers of beads in Koforidua

There are four groups of people that dominate the production of beads in the Eastern Region.

They are the Ewes, the Muslims who are made up of so many languages, the Ashantis and the Krobos who are the heartbeat of the local business. Within this business, we have the producers, the designers and the dealers.

Most often you will not see the producers in the market like this. They are those who deal with the raw materials in the villages to the finished products. But they do not sell them in the market to customers.

Most of the time their wives send the beads to their customers.

The designers are those who may have the knowledge but do not have the skills so they guide the producers on what the needs of the customers are and what designs are more patronised on the market.

The dealers are those who buy from the designers and then re-sell to those who are into retail business and sometimes the end users.

Though we have so many different types of beads on our market, the Amber bead, the Coral bead and the Bodom beads are  local. The rest are all imported.

Miss Lydia Obeng from Accra said she was learning how to design beads because she was planning to go into beads business so she left Accra to stay here and learn.

Ms Monira Yusif from Tamale said she came here from time to time to buy beads and take them to Tamale to sell.

She has been in the business for the past 12 years and this is what she does for a living.

Ms Lamisi Atiah said she had been in this business for almost 10 years now, and had customers from across the county and Africa who came to buy from her and they all testified that Ghanaian beads were the best.