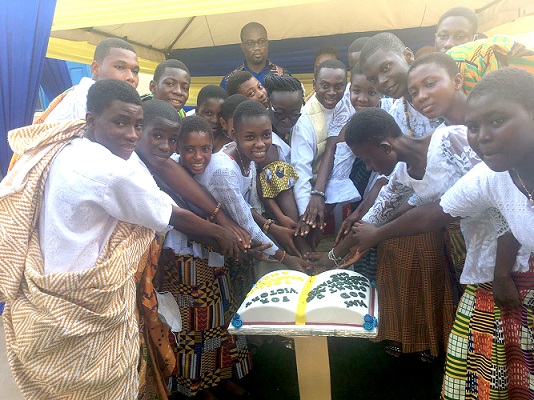 The graduands and some officials of the school cutting the celebration cake.

A graduation ceremony has been held for 16 final-year students of the Sir Peter Holdbrook-Smith Memorial School in Cape Coast.

Graduating students were awarded with certificates, with some of them who had been in the school since nursery given packages.

At the ceremony, the Proprietress of the school, Mrs Susan Holdbrook Ackatia Kwaidoo, advised the graduates to carry with them the morality and strict discipline inculcated in them.

She also charged them to do their best to come out with flying colours in the 2021 Basic Education Certificate Examination.

The head prefect of the school, Master Kwesi Amprofi Halm, in his speech, expressed his appreciation to the school for the high level of discipline and moral values instilled in them.

He noted that the education received had not only imparted knowledge but also inculcated moral values and virtues that would make them law-abiding citizens at the workplace and in society in future.

Master Halm said they have received quality education and intellectual abilities that would propel them to fit into their pre-university institutions and also become useful citizens in their various societies.

The Girls’ Prefect, Mirabel Amoasiwaah Boakye Amoah, said the tutors taught them to be God-fearing and that attribute would be with them forever.

The School Chaplain, Rev. Father Polycarp Hagan, urged the graduands to stick to the godly discipline they had received and also urged the parents to help them further build on such values.

The Tufohen of the Oguaa Traditional Area, Nana Kwame Adu VI, advised the graduates to be more focused in their education.
There were some performances by the students.