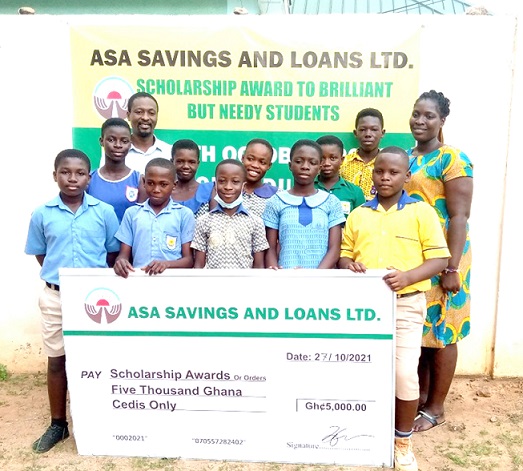 The Asa Savings and Loans Limited has awarded scholarship to 10 needy-brilliant students in Koforidua to support their education for the term.

The scholarship which was worth GH¢ 5,000.00 formed part of the company's corporate social responsibility (CSR).

The  beneficiaries  who are  five boys and five girls from five different schools in the New Juaben North Municipality in the company of their excited parents received a cheque for GH¢500.00 each.

Support
Speaking to the Junior Graphic, the Area Manager of Asa Savings and Loans Limited, Mr Imarat Hossain, said it was prudent for the bank to assist the future leaders in the community in which they operated.
He said the beneficiaries  needed to be supported financially  to enable them to achieve their aim in future.
He appealed to the parents to make sure the amounts received  were used judiciously so that the children could have the peace of mind to study.
Mr Hossain urged the pupils not to relent but continue to study very hard to excel in their examinations and win academic laurels.

Appreciation
A pupil of Greenland Preparatory School, Crystabel Agyei, expressed her appreciation to the management of Asa Savings and Loans Limited for the gesture which she said was  a big relief for them and their parents who had difficulties paying their school fees.
Another pupil, Francis Baah Osei, of the Presby Primary School,  was also grateful to the bank and promised to study hard and excel.