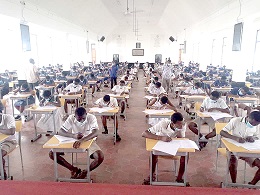 At the Rect Academy Examination Centre at Kwashiebu in Accra, as early as 8:am students were present, looking all set for the examination.

The story was not different at the St Charles Lwanga R/C Basic School examination centre, as BECE candidates were already seated waiting patiently to write their first paper, Social Studies, which started at 9:20a.m.

The Supervisor at the centre, Mr Frederick Mensah, disclosed that 322 candidates from 14 schools were writing the examination.

He said there was one absentee and as of the time the Junior Graphic visited the centre, he had not received any information as to why the candidate was absent.

According to Mr Mensah, the students would write two subjects each day from Monday to Thursday, and on Friday, which would be the final day, they would write just one paper.

A student of the Grace Memorial School at Lapaz in Accra, Sylvia Beke Avemegah, who spoke with the Junior Graphic after the first paper, said the first questions were not too difficult. She said she was fortunate that questions were set in areas  she had studied.

For Kelvin Quayson of the Christian Home Academy in Accra, he was able to answer all the questions because he had studied enough to enable him to answer the questions without difficulty.

From the Volta Region, Mr Emmanuel Modey reports that 704 out of 711 candidates wrote the first paper at the St Francis College of Education Centre at Hohoe.