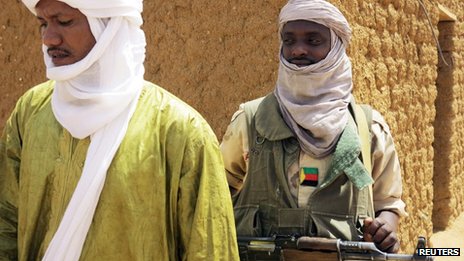 Mali has lifted a state of emergency in place since January, when France intervened to help drive out Islamists occupying the north, officials say.

The move comes after Mali's army re-entered the key town of Kidal, held by Tuareg rebels, to improve security ahead of the presidential election.

Rebels agreed to allow troops into the northern town as part of a peace deal.

The election on 28 July will be the first in Mali since the military staged a coup in 2012.

The occupation of Kidal had been a major obstacle to organising the presidential election.

Tuareg rebels captured the town after the French-led offensive forced militant Islamists out of northern Mali in February.

The Tuaregs have been fighting for autonomy in the north since Mali gained independence from France in 1960.

They say they are marginalised by the government in the capital, Bamako.

The main Tuareg rebel group, the National Movement for the Liberation of Azawad (MNLA), had worked with Islamist groups to seize the north of the country in 2012.

But the rebel movement later broke with the Islamist groups and backed French efforts to oust them.

In June, the Malian government signed a peace deal with the MNLA, calling for an immediate ceasefire and for government troops to return to Kidal.

The MNLA has watered down its demand for independence, saying it will settle, as a first step, for autonomy for the desert region where they live.

But the head of the electoral commission, Mamadou Diamoutani, expressed doubt that the polls would be free and fair.

"That job alone is tremendously difficult, given that 800,000 people are displaced or have become refugees."

A 12,600-strong UN peacekeeping force has been deployed to ensure stability in the lead-up to the nationwide vote.

The force - known by its French acronym Minusma - incorporates most of the 6,000 West African troops already in the country.

It is the third largest UN force in Africa, after those in Democratic Republic of Congo and Darfur.