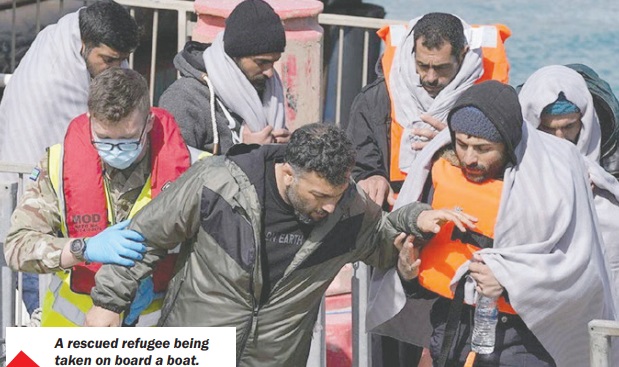 Do you know that the President of Rwanda, Paul Kagame’s, decision to accept refugees from the United Kingdom (UK) was influenced by the harrowing story of a young Ghanaian engineer who tried unsuccessfully to reach Europe through the torturous Sahara Desert?

Recently, the Prime Minister of the UK, Alexander Boris de Pfeffel Johnson, said he had been overwhelmed by the increasing number of people walking on the jaws of death to cross the English Canal from France to get to UK; some die trying.

Human traffickers have taken undue advantage of people seeking to enter the UK and have been charging them exorbitant fees, ranging from $2000 to $5000 just to load them on unsafe dinghies usually made of plastic sheets.

According to the International Organisation for Migration (IOM), since 2014, 166 migrants have been recorded dead or missing in the English Channel.

These grim statistics got the UK government worried the more and after looking through the books and consulting its Cabinet decided not to reinvent the wheel but copy what other countries have done.

Some countries looking for deterrent measures have implemented a scheme in recent years which critics have described as “outsourcing of refugees”.

This is sending people seeking refugee status in a country to a second far off country with the excuse that they would be processed.

Others who have done same are Denmark and Israel. In 2020, the US was set to send migrants to Spain but it is yet to materialise.

The UK early this year settled on refugees outsourcing to Rwanda. Why should a Prime Minister, whose grandparents were once refugees, come out with and implement such a policy?

It will be recalled that in April 14, 2022, when he was speaking on plans to tackle illegal migration, Mr Johnson had this to say: “My own great-grandfather came from Turkey in fear of his life, because our country [UK] offered sanctuary for this outspoken journalist”.

In announcing his plan to partner Rwanda to manage migration, the Prime Minister claimed that the UK is “a beacon of openness and generosity” and lauded the great British tradition of offering sanctuary to those who seek it through legal routes, while outlining how he intends to curb what he termed illegal migration.

So if the UK could pride itself of all these, why then should they put people seeking refuge in their country on a plane for the 6,500-kilometre trip to Rwanda?

Why cough up $120 million and give it to landlocked Rwanda to cater for these refugees?

Before its implementation, the policy continues to hit a snag. It has been hit by numerous legal encumbrances ranging from High Courts in London to the European Courts, but these notwithstanding, the UK government has indicated that nothing will stand in its way to ensure that those who enter Britain illegally are sent to Rwanda.

Those exempted are unaccompanied children.

Aside from these impediments, various interest groups, individuals and heads of organisations have voiced out their abhorrence to the policy both in public and in the closet.

Street demonstrations have become a daily feature by rights groups to force the government to halt it.

One heavyweight who has voiced out his misgivings is the heir to the British throne, Prince Charles. He is quoted as tagging the process as “appalling” during private conversations.

It has been almost three weeks since this was attributed to the Prince and he has not denied it.

The UN Chief for Refugees, Filippo Ghandi, commended the UK for saving people from dangerous journeys on the canal, but vehemently condemned it for engaging in what he referred to as “exportation” of refugees.

Fast forward, Mr Kagame has recounted the Ghanaian engineer’s story which influenced him in allowing his country to host refugees in 2018.

This Ghanaian engineer had paid human smugglers to take him on a perilous journey on the Sahara Desert but got stuck in Libya and had to promise to pay them later if they were able to bring him back to Ghana.

So why has Rwanda opened its welcoming arms to refugees from UK? Bear in mind that already some Afghans among many other nationals have been offered safe haven in the landlocked Africa country and are making strides in their second home before the British request came so if the first batch of the UK refuges touch base, they would not be the maiden refugees.

It all started when, as the Chairman of the Africa Union in 2018, the incessant and senseless stories of the young men sojourning to Europe got to him and he told his colleagues that he was going to take pragmatic measures regarding that, and true to his words, he offered a home to some of these people.

The Rwandan package has three options: firstly, those brought could stay and start a new life and could even have an opportunity to work within the government if there is opportunity and the refugee has the required background. Others also went to school, learnt vocations or engaged in business like some Afghans were doing.

The Ghanaian young engineer, whose story touched the Rwandan President, pleaded with the human traffickers to send him back to Ghana because his parents were willing to pay.

With this example, the second option for those who are sent to Rwanda is that they could go back home with the support of their government.

Thirdly, after the processing, other European countries could also come for some of the refugees.

Rwanda is offering a safe haven for refugees who are trying to get into the UK, not because of money. It is by that demonstrating that Africa has come of age and would not wait till it transitions into a developed continent before it offers a helping hand to people around the world who need a peaceful environment that could help them realise their dreams.

Yes, countries on the continent must work assiduously to put their economies in right shape, offer quality education and training to its teeming youth, beat down the rate of corruption to generate adequate resources to help the private sector create wealth for generating employment.

With these and many others, including democratic accountability and free and fair elections, the continent will see fewer, if not none, of its young people travelling miles to other nations abroad and also replicate the Rwandan experience and offer opportunities to people fleeing their countries.

Mr Kagame’s example is also telling the youth of Africa that with tenacity of heart, determination and hard work, they can realise their dreams on the soils of Africa.