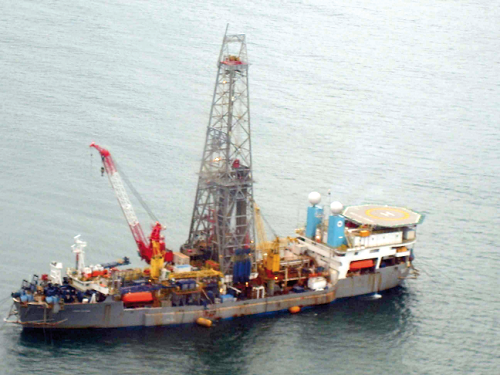 One of the drill ships in the offshore oil blocks

Many things are admirable about Ghana, compared to our neighbouring countries. Among these are free speech, fair elections, peaceful transitions of power and an empowered civil society.

In some ways, Ghana has more in common with the United States' democracy than many countries on our continent.

However, not all is well in the United States and not all is well in Ghana. Just like Trump seemed to completely wipe out the boundaries between truth and lies, between actual news and fake news — to the point that the truth did not matter anymore — the same seems to be happening in Ghana from selected civil society actors.

One particular civil society player, Mr Bright Simons, president of Pedegree and named in 2016 by Fortune magazine on their 50 World Greatest Leaders list, has emerged as the unofficial mouthpiece for critics of Ghana's move to increase her ownership in offshore oil blocks.

There are serious challenges with some recent assertions Mr Simons has made regarding the Ghana National Petroleum Corporation's (GNPC) move to ultimately put Ghanaians in complete control of the nations oil resources.

He seems to deliberately misconstrue the facts to smear the good name of the GNPC, a company voted by the Natural Resource Governance Institute as the best governed National Oil Company in Sub-Saharan Africa and number five globally just weeks ago.

Indeed, in the recent ENI – Springfield unitisation, Mr Simons managed to make the GNPC the villain in an article.

I will stick to the facts and list the top nine misrepresentations in relation to GNPC’s latest move.

Mr Simons makes this sweeping statement without listing any of the analysts he refers to. These are easily verifiable figures which should have been checked before they were published. The long term price forecast by various analysts (all in US$ per barrel) are:

This is false because it ignores the US$ 800 million spent by the Aker owner to add approximately 267 million barrels of oil to the two blocks.

Moreover, it is profoundly inconsistent with Mr Simons’ own claim that US$ 300 million has been spent on the two blocks.

Using Mr Simons’ own analysis, if the price is set at a maximum of US$ 1.1 billion and US$ 300 million has been spent so far, how can the windfall, if at all, be more than US$ 1 billion? This is yet another misrepresentation.

Aker and TRG have spent only US$ 300 million —FALSE

Mr Simons has been skimming through the annual reports of Aker and TRG looking for spendings by Aker Energy and AGM.

However, he seems unaware that Aker Energy and AGM have debt and commitments not listed in the annual accounts of their parent companies.

Verifiable figures from the GNPC suggests that Aker Energy and AGM have spent about US$ 700 million to US$ 800 million on the blocks.

Aker was established more than 175 years ago and its history is clearly stated on the Aker website.

Lambert Energy had no access to audited reservoir data — FALSE

Mr Simons claims that the independent third party Lambert Energy did not have access to audited reservoir data for the two oil blocks.

That is factually incorrect as third party reservoir data was available in the virtual data room used for the valuation.

My sources within civil society confirm that on a call with Lambert Energy, Mr Simons said himself that he had not been able to listen fully due to conflicting engagements.

On this point, Mr Simons is not only presenting a falsehood; he did not pay attention, yet, he makes bold pronouncements which do not represent the facts.

GNPC will merge the fields — FALSE

Mr Simons claims that the GNPC is to merge the fields and create an SPV. How can two fields be merged, physically? Again, Mr Simons plays with reality to fit his narrative. The GNPC is only saying that the joint operator company will be the operator of both fields.

The fields and the licences cannot be merged; that is not possible legally under Ghana’s legislation nor physically unless there is contact between the fields.

There are considerable richer discoveries made in Ghana that have not been commercialised, like Wawa and Akasa, and the Erin Energy block— FALSE

It is unclear why Mr Simons claims that these fields are richer than Pecan and Nyankom. These fields cannot be described as “richer discoveries” by any stretch of the imagination.

Clearly, none of these discoveries are anywhere close to Nyankom and Pecan in Mr Simons’ chosen world of “richer discoveries”. For the avoidance of doubt, Woodmac lists Nyankom at around 130 million barrels.

The commerciality of the fields are broadly unchanged since 2018 — FALSE

These investments completely improved the commercial viability of the fields. Also, Aker made the cost of developing the Pecan field cheaper, thereby increasing profitability.

Aker achieved this by reducing the break-even from US$ 45 per barrel to US$ 30 per barrel in the new development concept.

Prior to the outbreak of COVID-19, which disrupted the global oil and gas supply chain, Aker was ramping up for a Final Investment Decision on the Pecan Field.

In line with this, by early 2020, a Letter of Intent had been issued to Yinson for the construction of the FPSO for the Pecan Field development.

Also, Fugro had been appointed to perform a geophysical and geo-technical survey to optimise the Pecan subsea field layout.

The owner of Aker said that he and his partners would spend US$4.4 billion to produce oil, then changed his mind and settled on $2.5 billion — FALSE

Low oil prices experienced in 2020 following the outbreak of Covid-19 revealed that the earlier proposed development concept for the Pecan Field (worth US$ 4.4 billion with a breakeven price of US$ 45 per barrel) was not commercially viable.

This necessitated a revision to a phased development concept with a break-even of US$ 30 per barrel making the project more commercially viable.

These are the top nine issues about Ghana’s bold move to take full control of its oil resources that have so far been misrepresented. I pray this article has brought some clarity to some of the issues that have clearly been befuddled.

The writer is a leading Marketing Scholar in Africa. He is currently with the University of Ghana Business School