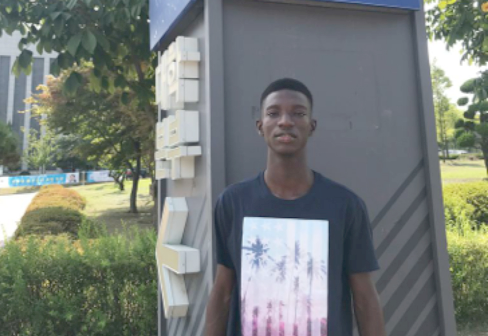 There’s an Akan proverb that says, “If a child can wash his hands clean, he deserves to feast with kings.”

There is nothing in the world more satisfying to me than watching children grow into successful assertive bright adults.

In counselling both parents and teachers, I claim that if you are not learning from your own children or students, you are not teaching them much!

That same claim applies to the larger nation: We can only attest to the social benefits of education when we see concrete benefits accrue from that investment.

Until then, education will continue to remain a fluid and amorphous concept – a spineless wish wrapped inside a facade beaming nowhere.

I first met the young Sakyi-Addo while serving as the chairman of the board of governors of Tema International School (TIS).

He was introduced to me by his father, Kwaku Sakyi-Addo –  a media pedigree in his own right –  who served on the board also.

Ohene Kofi enrolled at TIS in Year 8 in 2014 and completed his International Baccalaureate (IB) diploma in 2019.

At TIS, he committed himself in every key students’ activity possible. The well-rounded figure was a deputy editor of the school magazine; sports boy of the year; sports prefect; captain of the soccer team; middle distance athlete; member of the volleyball and handball teams; a black belt in Taekwando; and won the Best Public Speaker competition for year 2018.

As providence would endorse the effort, the Incheon National University –  South Korea –  invested in him with a reward of a full scholarship. He’s now in his third year studying International Trade & Commerce.

I was beside myself with joy when TIS management posted Nana Kofi’s paper to me. I live for assertive moments like this! The young Sakyi-Addo’s concerns are affirmed as follows:

One of the areas of concern I observed throughout my life in Ghana was the inefficiency of the country’s public transport system.

Ghana does not have a functioning railway system; the design of the roads does not suit pedestrians or cyclists; online ride-hailing transport costs are high, and taxi fares are, largely, not standardised and therefore unpredictable.

The most common form of urban mass transport in Ghana known as ‘tro tros’, do not come with any schedules; instead, they simply wait until they are full and then depart. It’s the same for inter-city buses.

This is an area of concern because it prevents Ghanaians from traveling with ease across the country. In big cities such as Accra, this leads to inefficiencies in all areas of life for the average person.

Many people tend to show up late to meetings or work due to high congestion levels on the roads, inability to predict the time buses will arrive and leave from terminals, and a generally inefficient public transport system.

Furthermore, Accra, the capital, in particular, is constantly expanding, and failure to complement the city with a functioning transport system designed for the long-term, such as a Bus Rapid Transport (BRT) or a railway, will eventually make commuting in the city nearly impossible.

Throughout my time studying in Korea, amidst all the skyscrapers, high-tech gadgetry/infrastructure and fancy cafes, I have been left mesmerised by the efficiency of the public transport system.

The subway system is remarkably efficient and affordable and gets you from point to point within cities in minutes, and between cities in a relatively short period of time by 250 km per hour speed-trains and multi-lane highways.

You can check the time buses are scheduled to arrive and the route each bus will take via an app on your phone.

This makes it astoundingly easy to plan meetings and schedule appointments, because you are instantly aware of what time you will arrive at your destination and the costs it may involve.

In as much as it might be difficult to build a public system like that of South Korea’s, I do believe if we begin by implementing an effective bus system, it would put the country on the right path; after all Rome was not built in a day, and it is important for us to take the small steps now rather than do nothing at all.

The Bus Rapid Transport System is a high-quality bus-based system that delivers comfortable, and cost-effective services at metro-level capacity.

It does this through the provision of dedicated lanes, with bus ways and iconic stations typically aligned to the center of the road, off-board fare collection, and fast and frequent operations. (Institute for Transportation and Development Policy, 2021).

The BRT system has features similar to a metro system, making it more reliable, convenient and faster than regular bus services.

There are many countries and cities around the world that have BRT systems including Lagos (Nigeria), Thailand, Sweden, Indonesia, Cape Town (South Africa), and Marrakesh (Morocco).

I believe Ghana can build a similar system in the busiest parts of Accra, and other major cities such as Kumasi or Takoradi.

Implementing the system in these cities could be a huge step in changing the nature of public transport in urban Ghana and helping to transform one of them into a smart city.