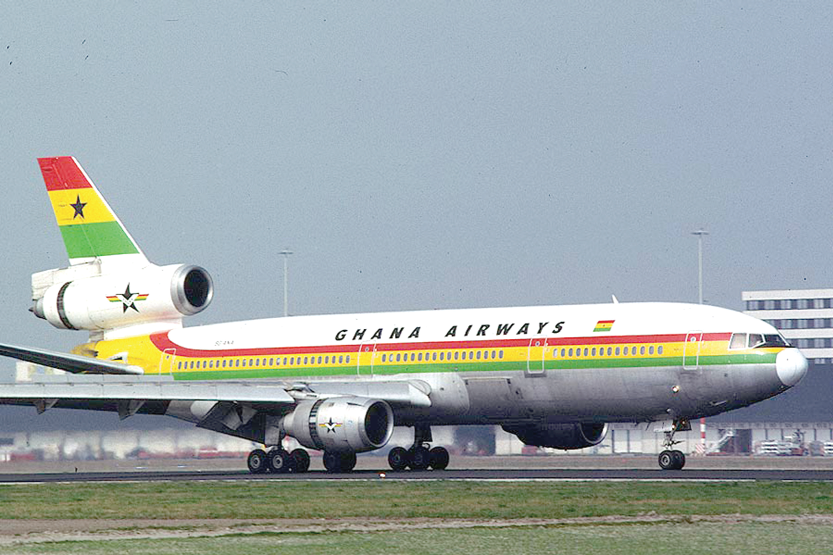 A plane of the defunct Ghana Airways

A man owned a vast area of prime land. He leases it out to people who construct buildings for residential and other commercial uses, at huge profits to themselves; but he does not have any house himself to live in. He and his family rent his lessees' houses.

Some of his children are highly qualified and experienced world-acclaimed architects, building engineers and construction experts, who are employed by the lessees to design, build and maintain their buildings. Yet, this man does not use them to construct and maintain a house of his own.

Whatever the facts, the structure fell into disrepair, and he eventually closed it down and had it demolished.

Anytime his wife asked him about rebuilding it, he replied that he was waiting for investors to partner with him to build one. About a year ago, he travelled to a conference and announced from there that he had signed an MoU to buy building materials to construct and furnish the proposed house.

Some of his children told their mother that they did not believe their father, because he had not even earmarked a plot for the house he claimed he had signed a contract to purchase materials for.

A year later, his family is still waiting for the materials to be delivered.

Meanwhile, anytime any of his lessees completes his house, the lessee throws a house warming party, which is enthusiastically attended by the man’s children with his architect and building engineer children taking guests round to exhibit the beauty of what they have created.

Guests are left in awe at the level of expertise that his children have in the building industry.

After the last of such house warming parties, the man made a speech proclaiming that that demonstrated the confidence the developers had in his land as very prime land.

Now hear the meaning of this parable. The land owner is successive governments of Ghana.

The prime land is Kotoka International Airport (KIA) and our airspace that is hosting many international and local airlines and generating significant revenue.

The house that the landowner built, left to fall into disrepair and finally demolished, is our national airline. Ghana Airways fell into debt out of mismanagement and was eventually closed down some 16 years ago.

The long suffering wife is the people of Ghana who keep hearing unfulfilled promises by successive governments that the national airline is only an election away.

The children who always have to rent their father's lessees' buildings are Ghanaians who have to use foreign airlines in their travels out of, and into, Accra.

The highly qualified and experienced architect, building engineer and building expert children of this man are the Ghanaian-trained pilots, engineers and flight attendants of the defunct Ghana Airways who were  trained at a huge cost to Ghana.

They are highly sought after by foreign airlines and are serving as line and instructor pilots, maintenance engineers and flight attendants in renowned airlines.

For example, a few days ago Qatar Airlines flew their maiden passenger service to Accra. In control of the Boeing 787 Dreamliner aircraft were two Ghanaian Captains, who are flying instructors for the airline. A number of Ghanaians were also among the cabin crew.

About two years earlier, Emirates operated their Airbus 380, the largest passenger aircraft in the world, on that aircraft’s maiden flight to Accra.

Again, in command of that aircraft and in charge of its turnaround maintenance crew and some flight attendants were Ghanaians.

These pilots are only a handful of others who were trained by Ghana but have left to fly for, and are still flying for, many foreign airlines. They left reluctantly after Ghana Airways was closed down, and they found out two years later that there was no plan to form another national airline.

The housewarming in the parable is the fanfare and national excitement that accompanied the arrival of both flights, much to the embarrassment of some Ghanaians.

As a nation, we must take a firm decision on whether we need a national airline or not. The fact, however, is that about 15 foreign airlines operate and fly to KIA, which is indicative of the huge market potential that exists in our country.

With our history of mismanaging the defunct Ghana Airways, there is a risk that forming another one may just be a replay of the fate of the previous one. This will expose the government in power to being blamed, if the new airline also falls into bankruptcy, the same way the government at the time of the liquidation of Ghana Airways was vilified into eternity.

Admittedly, the operation of so many airlines into KIA is a source of significant revenue for the country.

We must face reality, therefore, and admit that we find this a better and safer economic option than risk setting up and running an airline unsuccessfully.

If this is the decision to take, surely let us do so and stop paying lip service to the irritating announcements of an upcoming national airline that our governments keep making for 16 years now.

In doing so, we must admit that the fact that we do not have a national airline is not because we do not have competent crew to fly the planes and maintain them, but it is because we are a nation incapable of setting up and then running an airline profitably.

This is already common knowledge in the international community, and it is exactly the silently loud message these foreign airlines send to us every time they fly their planes to Accra with Ghanaians flying and maintaining them.

Even though setting up a national airline and operating it profitably for the benefit of the nation is possible and easy,  we have to admit that the models we have been unsuccessfully attempting all these years bear eloquent testimony to our lack of capacity to do so.

Next time a foreign airline flies into Accra, with a team of Ghanaian flight and maintenance crew, it should not be an occasion for fanfare and merry making, but of national shame and reproach.

Let us stop embarrassing ourselves.

The writer is a Retired Airline Pilot