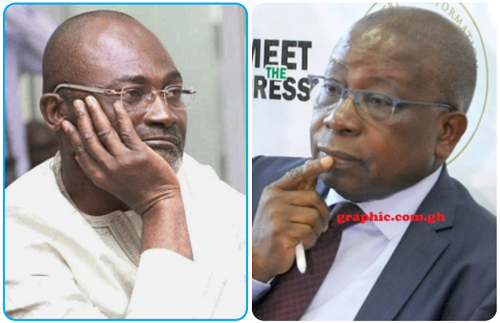 I was checking the cost at which some other countries have bought their Covid-19 vaccines. It is beginning to look as if Ghana’s imports from Dubai may well be among the most expensive in the world.

Yet, in addition to the breaches of the procurement process, the best the President did was to laugh it all off at a meeting with chiefs in the minister’s region?

It is strange why a minister, who seems to have no clue just about anything in his ministry, is still at post and we are waiting for Parliament to reconvene in October to provide us nothing more than a political football stadium.

Unless the President knows something besides what the man himself revealed during the parliamentary probe, I feel offended that the worst that has happened to the minister is to allow him to take a two week time off, when he should have been asked to step aside.

What kind of minister does these things anywhere and survives?

According to a police statement, the Prime Minister held a birthday party on February 27 with 13 people in a restaurant, in clear violation of COVID-19 rules which limit such gatherings to a maximum of 10 people.

Hear Norway’s police chief: "Ms Solberg is the country's most important elected representative and has, on several occasions, been the leading figure in the government's decisions on measures to curb the pandemic. It is, therefore, considered justified to give a sanction to maintain public confidence in the health rules".

But even more beautiful for democracy were the words of the Prime Minister herself. In a Facebook post, she apologised, acknowledging that Norwegian citizens were justified to be "angry and disappointed" with her actions.

"I'm very sorry. I think this is embarrassing but I'm primarily sad because I know I have to lead as a particularly good example," she said.

Talk about strong institutions! In those countries, MPs, ministers and Presidents are not gods.

Against strong institutions, I invite Ghanaians to take a look at strong personalities in Ghana.

One of them is Kennedy Agyepong, the Assin North MP. He has good education. He has great wealth. According to Ghanaweb.com, the MP has a bed that costs US$80,000. But right-thinking Ghanaians are saying that though the country owes him a commendation for his investigation leading to the exposure of the Woyome scandal, this MP, for the words that come out of his mouth, is not fit to sit among honourables in that honourable house.

Remember his unjustified attack on the then EC chair, Charlotte Osei, whom he accused of trading sex for her position.

In February 2016 and October 2019, he openly traded insults on air with a female radio presenter, Afia Schwarzenegger. At his ugliest, he “revealed” that the lady “smells down there” and accused her of bedwetting. “Honourable MP?”

In January, 2019, he placed a picture of investigator Ahmed Hussein-Suale on the screens of his private Net 2 TV and incited viewers to go after him, saying “This Ahmed, you all know he lives at Madina. When you see him, beat him” and that “whatever happens, I'll pay." Hussein-Suale was subsequently murdered.

In 2018, Mr Agyepong was heard in an audio and video lambasting Parliament, saying that “if this House were not useless, they would not have the likes of Mr Osei Kyei-Mensah-Bonsu as its leader”.

The words of condemnation, including some by fellow MP, Atta Akyea, who said, “the capacity to control your behaviour is evidence of maturity.”

That was the worst punishment he received.

Only last July 9, the Assin Central MP threatened Luv FM journalist Erastus Asare Donkor, saying “For the foolish submissions he made before the parliamentary committee, we have to beat the hell out of him.”

Parliament swore it was going to drag him before its Privileges Committee yet, you, dear reader and I know that nothing will come out of the threat.

This is the reason for my own hashtag: #Fix Errant Personalities