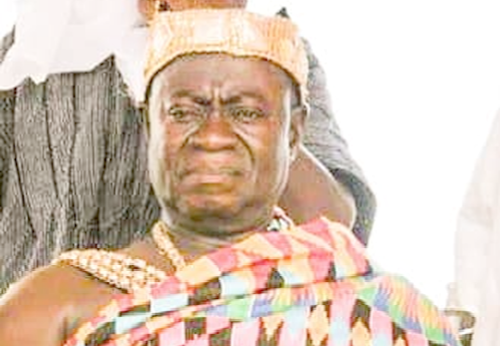 Osahene Offei Kwasi Agyeman left behind a record and legacy of accomplishment as a chief and leader in both private and public life.

He was the senior divisional chief of Akuapem and served as the chairman of the Akuapem Traditional Council, when the Okuapehene, Oseadeyo Addo Dankwa III, went to his ancestors.

The Osahene was born on November 4, 1942 at Akropong, Akuapem to Bafour Bampoe-Parry, the late Sanahene of Akyem Ati and Elizabeth Asaa Ayeh.

After his primary and high school education, he opted to pursue a career in the Ghana Armed Forces in 1961 and completed his initial training at the Ghana Military Academy in 1962.

He was sent to the United Kingdom to do his young officers’ course at the Royal Air Force School of Accounting at Grantham, where he obtained a certificate in Accounting.

He worked in the Forces Pay Office and in various staff positions at the Paymaster General’s Office at the Ministry of Defence.

In 1970, he was sent to do his Senior Staff Course at the US School of Finance in Indianapolis, where he obtained a Diploma in Financial Management.

Shortly after returning from the US, he voluntarily retired from the army as a young major to pursue his professional and academic dreams.

After retiring from the military,the Osahene immediately returned to the US to pursue a degree at the Rutgers University in New Jersey.

After attaining his Bachelor’s Degree in Economics and Finance in 1977 and a Masters Degree in Management in 1979, he worked for a number of reputable International companies including the Metex Corporation, the Siemens Corporation and the AT&T.

While at the AT&T, the Osahene served as a mentor and confidant for most of his colleagues.

The Osahene, a royal of the Akuapem Kronti Division began his royal duties in April 1983, when he was installed as the Osafohene of the Kronti Division and started his apprenticeship under his uncle, Nana Boafo Ansah II.

In the Kronti Division, there was a requirement for future occupants of the Kronti Stool to serve some form of apprenticeship to prepare them for their future role.

The training he received on traditional issues, rituals and practices helped him to appreciate the importance of truth and decency in all leadership roles.

His uncle’s firm nature and courage in the face of adversity and challenges helped the Osahene to aspire to cultivate those character attributes.

The Osahene firmly believed that chieftaincy must be viewed and used as public service for the benefit of the people instead for personal aggrandisement.

He aligned himself with like-minded traditional and community leaders who strove to serve their communities and make life better for others.

The Osahene also believed that a modern chief should function at more workplaces in addition to the palace, and his role, should transcend his traditional duties. True to that belief, after becoming Krontihene, he, therefore, used his expertise in various enterprises and functions.

He worked as a General Manager at the Enterprise Insurance Company and was an Executive Director of the DFID sponsored Mega NGO.

According to history, the traditional institution of the position of the Krontihene and senior divisional chief evolved during the era of warfare but the Osahene realised that in today’s atmosphere, the institution’s relevance can only be linked to the provision of development and peace. That became the twin objective of the late Osahene.

Under his leadership, several development projects were executed, including:

• The Adami Water Supply System which was executed by the Kronti in tandem with many groups of people and organisations. This water supply system continues to serve many of the households at Akropong;

• The Kronti Computer Learning Centre in the Kronti Palace, which was executed in collaboration with the Help4Ghana and further expanded into a training centre with full Internet access and connectivity hailed as the best in the area;

• An educational scholarship scheme established with partners from Austria, which benefitted and continues to benefit hundreds of children in the community including the needy, thus contributing towards stemming indiscipline and truancy in the area;

• The provision of valuable support to primary and secondary schools in the traditional area in the form of computers, furniture and other valuable stationery.

The Osahene was of the view that the most urgent responsibility of the chieftaincy institution in the modern era was to ensure that the heritage of the institution is further enhanced, which was why he worked tirelessly to promote the role of the Krontihene as the senior divisional chief of Akuapem.

In that vein,the Osahene worked tenaciously to secure the reunification and allegiance of the divisions of Akuapem to the Ofori Kuma Stool, after 20 years in the Akuapem state.

He rallied the clergy, citizens of the soil, both inside and outside Ghana, political figures and other persons in favour of peace in the traditional area, towards this end.

During the absence of Oseadeeyo Addo Dankwa due to ill health and subsequent passing away, Osahene assumed the position of head of the traditional council and its standing committee and in that period promoted this peace and reunification.

The Osahene believed that the future of our community very much depended on the extent to which the more fortunate ones among us contributed and dedicated themselves to the support of those in need.

To that end, he instituted an award initiative which recognised and endorsed industrious sons of the land.

He also believed that in the current situation of hopelessness and moral decadence, a turn to God held the answer. He, therefore, paid attention to his religious and spiritual life.