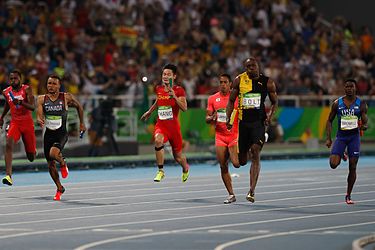 One of the highlights of my secondary school days was the annual Inter-Schools and Colleges athletics competition simply called “INTER-CO.”

Among others, it afforded us in Boys Schools the opportunity to improve on our “puppy love” expressed through letters to our friends in the Girls Schools, this time by warm innocent hugs.

The climax of the two-day competition was the sprint relay 4 (by) 110 yards event. The boys’ event which was the last for the two days was fiercely contested. This is not surprising considering Ghana’s past Athletics record in sprint relays internationally.

At the 1966 Commonwealth Games in Kingston, Jamaica, Ghana’s quartet of BK Mends, JA Addy, ECO Addy and SF Allotey did not only win gold, they set a new record of 39.8 seconds.

Featuring the fastest sprinters of any Games, be it the Commonwealth or Olympics, a very important determinant of the winner in sprint relays was and still is the smoothness with which batons are changed. A split second gained or lost in changing batons could determine who the gold or silver medalist is assuming they are equally matched. Usually, the anchor is the fastest and runs the last leg.

Interestingly, when a team wins the event as Ghana did in Jamaica in 1966, the quartet joyously celebrates together emphasizing the importance of teamwork over individual effort.

They do not go back to find out how fast each athlete ran his leg.

I served the Ghana Armed Forces for over four decades, and teamwork was always emphasized over individual brilliance.

So, how come politicians have not learnt this simple principle of teamwork and always go back to make claims of what they achieved in government that others did not achieve?

After all, the founders of modern day Political Philosophy in the C17th Thomas Hobbes, John Locke, Jean-Paul Sartre etc taught man that, for humans to come out of the “state of nature” where the jungle law of survival of the fittest reigns, making life “solitary, poor, nasty, brutish and short,” civilized society must graduate from the animal kingdom to statehood.

Individuals cede part of their freedom to the State which must provide for the collective good, security and services like roads, water, electricity which individuals cannot afford to provide for themselves. The state does this through governments which tax individuals. Governance must therefore be a continuum, not “hop-step-and-jump!” It is our taxes which governments use to administer states, and not personal monies of individuals in periodic governments.

So, how come this self-aggrandising attitude making statements like humorously put below?

“I killed two million adult grass-cutters when I was in government, you killed only 1,234 “small-boy” grass-cutters.

You built only fifty KVIPs and I have built 100.

I filled one million potholes. You only filled half that.

My Mercedes Benz is bigger than yours.”

Embarrassingly, these claims and counter claims go on unabated.

At Graduate School a quarter of a century ago, a mate of mine did a presentation on his country Malaysia as we were all required to do on our countries. Significantly, Ghana and Malaysia both got their independence from Britain in 1957, Ghana in March and Malaysia in August.

Described as twins, both had a GDP per capita of about six hundred dollars. Today, Ghana’s GDP per capita is 2,200 US dollars while Malaysia’s is 11,400 dollars.

An analysis of the two countries shows that while Malaysia has been politically stable, Ghana has had a chequered history with long periods of instability. Obviously, without political stability, there can be no meaningful economic development!

The on-going tit-for-tat- politics of vile insults and dangerous rhetoric calling for killing of fellow Ghanaians does not only reduce our image internationally, but also creates an atmosphere of fear which does not promote economic development.

Using the 4 * 110 yards relay as an example, Usain Bolt who has always anchored Jamaica to win gold has never claimed that, because he runs fastest, his gold medal is more gold than that of other members of the team. Neither did the fastest runner of Ghana’s gold winning team in Jamaica in 1966.

Do not lead Ghana to the abyss for UN peacekeepers to come in! For, once we go over the cliff, Ghana will never be the same again!