Should LGBTQIA+ be recognised in Ghana? 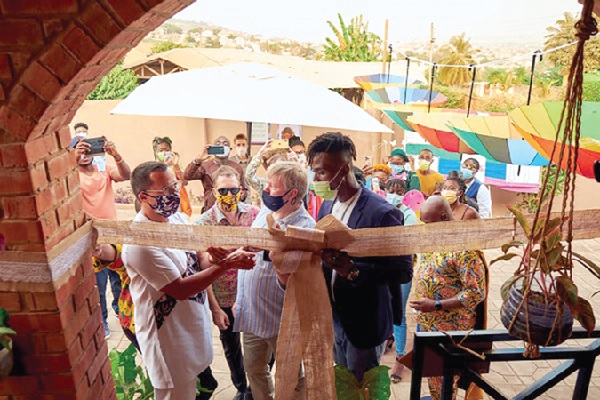 Members of the LGBTQIA+ community and supporters at the inauguration of an office at Kwabenya in Accra
30.5k Shares

We know that human beings were created male and female.

However, for some time now some have argued they don’t fit into the straight jacket of male and female.

It started with homosexuality and new terms such as LGBT evolved and now we have LGBTQIA+, people who have identified themselves as lesbian, gay, bisexual, transgender, intersex or queer.

In Ghana, many refer to it as “trumu trumu “ or sex involving the anus.

LGBTQIA+ is really not new.

The first recorded history of it was made in ancient Egypt some 2,200 BC when two men lived as a couple.

In their memory, there is a statue of two men with their noses almost touching.

Some social animals such as birds, reptiles, fishes, amphibians and mammals are also known to show homosexual behaviour in one or more of the following: sex, copulation, courtship, mating games, genital stimulation, affection, pair bonding or parenting.

A study in 1995 showed homosexuality is more common than we think.

Today, studies show that same-sex relationship is increasing everywhere in the world.

The situation cuts across the social spectrum; from bishops, lawmakers to young students.

Why LGBTQIA+?
The exact causes of LGBTQIA+ are not known. However, biological, psychological, socio-cultural and economic factors may predispose a person to LGBTQIA+.

Some people get into it out of curiosity.

The media constantly shows same-sex partners in a happy life.

They include top movie and movie stars, bishops and politicians.

In our present economic situation, in which about half of Ghanaians can’t afford to live on GH¢6 a day, many parents shirk their responsibilities and children are left to do what pleases them. They become vulnerable to all kinds of experimentation, including homosexuality.

Today, the world has become a global village and we have become vulnerable to lifestyles such as LGBTQIA+ which is alien and even a taboo to our cultural and traditional practices.

Sadly, LGBTQIA+ is gaining ground in Ghana and the issue cuts across age, status and faith.

Should LGBTQIA+ be legalised in Ghana?
An interview Al Jazeera had with President Nana Addo Dankwa Akufo-Addo a couple of years ago generated controversy and confusion.

As an astute politician, the President tried to be diplomatic by making two statements which pro and anti- homosexuality proponents saw as contradictory.

His first statement was that the issue of homosexuality was not on his table.

Some saw this as a show of his hatred for homosexuals.

His second statement was that the agitation for recognition is bound to be intensified and given recognition.

Some saw this as a show of his love for homosexuals.

The same person was seen by some as loving homosexuals and some as hating them at the same time. This is politics for you!

Some praise the wisdom in legalising LGBTQIA+ and argue that denying LGBTQIA+ means denying some people their fundamental human rights.

The 1992 Constitution of Ghana, for example, gives every Ghanaian his basic human rights – the right to be protected, the right to freedom of choice, liberty, thought and expression.

Therefore, as long as two adults engage in a homosexual act and do not infringe on the right of others, they are deemed not to have caused any offence.

No one must be deprived of his liberty.

Some are against LGBTQIA+.

This is not a sin but they are, however, against homosexual acts.

In fact, while Pope John Paul states that homosexuality is immoral, unhealthy and a grave sin, the Catholic Archbishop of Cape Coast, Most Rev. Palmer-Buckle, says homosexuality is not a basic human right.

God says it is an abomination.

Again, recently, the Catholic Bishop’s Conference urged the government to close down the LGBTQIA+ office in Accra.

Today, while some countries such as Nigeria and Zimbabwe have abolished homosexuality, others such as the United States and Ireland have legalised it.

Some donor countries are even threatening to withdraw assistance to poor countries which do not legalise homosexuality.

And as a man in this writer’s hometown, Obomeng–Kwahu says: ‘ if you are poor, your case is small’.

The powerful countries are blackmailing poor countries to legalise LGBTQIA+ and the fear is that eventually, we will give in because we will have no choice out of poverty.

God in his wisdom made us male and female and called us into a relationship pleasing to him.

He gave a specific body part to men and a different one to women and commanded them to multiply.

Sexual activity must, therefore, be restricted between men and women.

It is only in a man and woman relationship that human beings can uphold the human culture in the transmission of life through natural reproduction.

LGBTQIA+ in all its forms isn’t natural; it is made by wrong choices in life, but we can never be wiser and adopt any lifestyle better than what our Maker has established.

Any attempt to do anything better than what God has established fails.

Should LGBTQIA+ be legalised in Ghana?

Join the debate but let your focus be what brings dignity to human beings, marriage and family life.