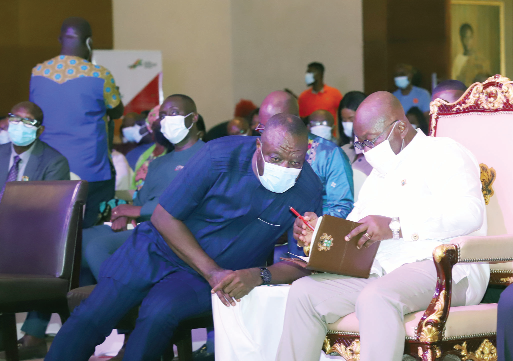 President Akufo-Addo interacting with Dr Mohammed Awal (left), the Minister of Tourism, Arts and Culture, at the launch of the Presidential Pitch For Local Films. Picture: SAMUEL TEI ADANO

President Nana Addo Dankwa Akufo-Addo has launched the $25-million Presidential Film Pitch Series, with a call on local film producers to show more creativity and innovation in their productions.

That, he said, would make Ghanaian films popular not only within the country but also capable of satisfying international audiences.

The Presidential Pitch seeks to create the platform for Ghanaians filmmakers to undertake projects within the Ghanaian ecosystem.

It will engage investors, broadcasters, distributors, sponsors and platforms around the world for potential collaborations, sponsorship, investment, sales and advertising opportunities.

One hundred projects in the form of documentaries, feature films, short films, series, games and film infrastructure were received by the National Film Authority (NFA) from Ghanaian film entrepreneurs, out of which 25 projects will be shortlisted by tomorrow.

The goal is for each shortlisted project to close deals that will bring the project to fruition by benefiting from sponsorship from entities, including Amazon, Netflix and DSTV.

President Akufo-Addo said the Ghanaian film industry was replete with talented players along the value chain, saying the government would continue to initiate policies and programmes to help make the sector competitive and viable.

The announced that the government, through the Ministry of Tourism, Arts and Culture and the NFA, had brought together Ghanaians, including producers, investors, distributors and marketers, to strike deals to the tune of $25 million.

He explained that that investment, which had already been secured from the private sector, would go a long way to strengthen the local film ecosystem.

He said the selected films had to meet stringent criteria, which included innovation, feasibility, impact and scalability.

The President said the project was expected to generate 6,000 jobs, adding that Ghanaian film produces now had the opportunity to access markets for their films.

President Akufo-Addo said the government was retooling the National Film and Television Institute (NAFTA) to enable it to provide the needed training for players in the industry to make Ghana attractive to international film production, as well as become the hub for film production in West Africa.

“Some €45 million has been approved for NAFTI to reform it into a world-class training facility. The school is also introducing specialised courses in script writing, as well as the business of film,” he said.

That, according to the President, meant that Ghana would now have graduates with speciality in script writing to feed the film sector and help build the needed structures for a vibrant film ecosystem.

Additionally, NAFTI would be issuing its own degrees as part of the University of Media Arts, he said.

President Akufo-Addo said the NFA would lead the charge to introduce business development modules into film making, production and distribution in order to help create a vibrant market for local film production.

He announced that he had given assent to the Creative Industry Act passed by Parliament, which would help create an enabling environment for the Ghanaian film sector and the creative arts sector in general to contribute effectively to the nation's growth.

“The establishment of the Creative Arts Agency will lead to the setting up of a Creative Arts Fund to help address the challenge of funding that has bedeviled the sector,” he added.

Dr Awal noted that the film and music industry was a gold mine, and that the ministry would resource the sector to make Ghanaian films makers, actors and artistes become rich and comfortable, which also formed part of the government’s policy of creating jobs and wealth.

He said the target was to ensure that Ghana produced 200 world-class movies each year, which would generate 40,000 jobs in that sector alone.

He said another move was for the creation of a film bank which would ensure the production of good scripts.

He said the ministry was collaborating with the private sector to build a multipurpose studio by the end of next year to produce films and music in Ghana and urged all to support the move to create wealth for the industry and the country.