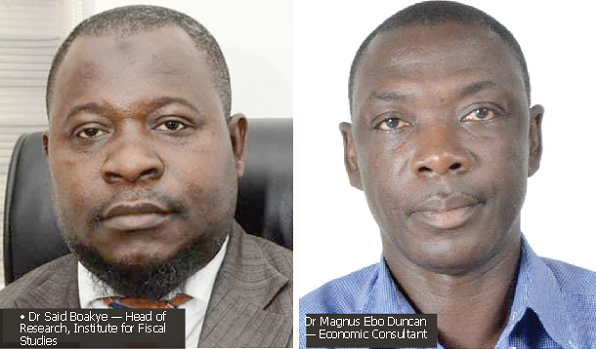 Two economic experts have expressed surprise about the government’s decision to revise the growth target for the year upwards, stating that nothing on the economic front supported the attempted bullish posture.

With first quarter growth of 3.1 per cent missing the annual target, the experts said it was curious that the government was still confident that growth would surpass its original target of five per cent to hit 5.1 per cent in 2021. The annual Gross Domestic Product (GDP) growth rate is averaged from the quarterly figures.

The analysts – an economist and a researcher, Dr. Said Boakye, and a former Head of Economic Statistics at the Ghana Statistical Service (GSS), Dr. Magnus Ebo Duncan, were commenting on an earlier disclosure by the Finance Minister, Mr. Ken Ofori-Atta, that growth target for the year had been revised upwards from five per cent to 5.1 per cent.

He told Parliament on July 29 that the macroeconomic framework had been recalibrated to reflect developments following the presentation of the 2021 budget in March.

Consequently, he said, this “led to a revision in the overall real GDP growth rate to 5.1 per cent in 2021 compared to the five per cent originally projected in the 2021 Budget. Similarly, non-oil GDP for 2021 growth has been revised to seven per cent, up from the 6.7 per cent in the 2021 Budget,” the minister said when he presented the mid-year budget review.

Dr. Boakye, who is the Head of Research at fiscal policy think tank, the Institute for Fiscal Studies (IFS), told the Graphic Business on August 1 that the revision was a bit weird and unconventional.

“If by the end of the first quarter, the growth was higher than projected, that would have been understood but the provisional data showed that it was lower than projected. So what is the basis?” he asked.

“For me, it is unconventional that you have not seen anything significant yet you are revising growth upwards,” the economist added.

The GSS data released in June showed that the economy expanded by 3.1 per cent compared to seven per cent in the same period last year and four per cent in the quarter ending December 2020.

Dr. Boakye said this showed that the earlier target of five per cent was even at risk, strengthening the concerns over the bases of the upward adjustment.

Dr. Duncan said he was also not convinced about the upward revision to growth, given that nothing was said to be the driver.

He added that the adjustment was also insignificant such that the government could have allowed the status to remain and pat itself on the back when it exceeded the five per cent target.

“The difference between five per cent and 5.1 per cent is highly insignificant. If it was higher, fine but to revise the growth rate because of 0.01 per cent is a bit curious and I struggle to understand,” the economic consultant said.

The two experts said the action appeared cosmetic and risked being misconstrued to mean an attempt by the government to achieve a desired result in the fiscal deficit target and the debt-to-GDP ratio for the year.

They said that concern had been strengthened by the insignificant of the revision, the lack of concrete data to back it and the decision to revise the deficit target from 9.5 per cent of GDP to 9.4 per cent of GDP for the year.

They, therefore, called for proper clarification from the ministry on the development to help to inform analyses and scrutiny.

He added that total expenditure, including payments for the clearance of arrears, was projected to remain unchanged from the original budget projection of GH¢113.75 billion, representing 25.9 per cent of GDP.

He, however, said some expenditure items had been adjusted to reflect developments in the first half of 2021.