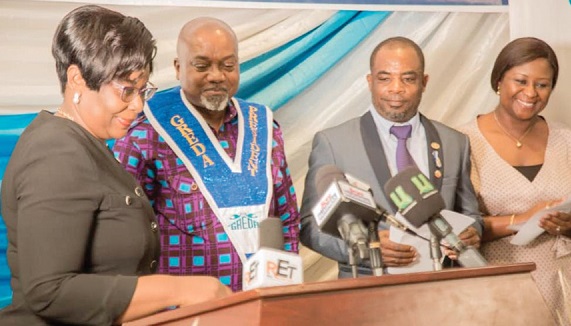 The Executive Council of the Ghana Real Estate Developers Association (GREDA) has taken office, with a pledge to help address public concerns about the quality of houses delivered in recent times.

The council is presided over by Patrick Ebo Bonful, who was re-elected unopposed as president of the association.

The other national executives are the first and second Vice Presidents, Eric Ebo Acquah and Cynthia Opuni respectively, Secretary, Samuel Amegayibo, and the Treasurer, Harry Quartey.

Seth Adu, Philip Korletey, Salah Kweku Kalmoni and Bright Adom were elected members of the council for a two-year tenure.

At the swearing in ceremony on Tuesday, the GREDA President charged members of the association to take advantage of the housing deficit to churn out quality and affordable units for the populace.

Mr Bonful said it was important to note that buying a house for a home was a lifetime investment and as such, quality could not be taken for granted by those who provided them to prospective buyers.

“Unfortunately, in recent times, there has been increasing concern by a section of the populace about the quality of houses being provided by some real estate developers and so, we should do well to eschew such negative tendencies. The erroneous misconception out there is that, every ‘developer’ is perceived to be a GREDA member, which is not the case,” he said.

The GREDA president also bemoaned the rising cost of cement, iron rods and other building materials, stating that it posed the greatest challenge to “our affordable housing delivery” dream.

“I am, therefore, challenging all of us to come out with sustainable solutions to counter this problem,” he said but called for a second look at the building construction methodologies and materials used in their operations.

“Interlocking hydrologically compressed bricks could be a way out. In addition, there are several other building systems that can help out.

Mr Bonful, who is also the Managing Director of PS Bonful, said the association was proposing to the government to review the Home Mortgage Finance Act 2008 (Act 770), the Registration of Lands for Allodial Owners of Land policy as well as digitalise land registration process