Include us in Gov’t bailout fund - Menzgold customers insist 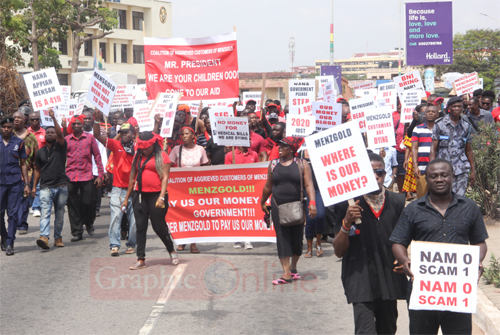 The Coalition of Aggrieved Customers of Menzgold Ghana (CACM) has again called on the Security and Exchange Commission (SEC) to reconsider their inclusion in the government’s bailout fund.

The Coalition had earlier requested their inclusion in the bailout fund, but SEC rejected their request on the basis that the target of the bailout did not cover Menzgold Customers.

The Coalition in a statement signed by the chairman of the coalition, Mr. Isaac Nyarko, and the Public Relations Officer (PRO), Mr. Frederick Forson, and addressed to the Director-General of the SEC, Reverend Daniel Ogbarmey Tetteh, also disagreed with the commission’s statement that Menzgold was not an assets management company regulated by the SEC.

They noted that SEC owes them the duty to ensure that their monies were refunded to them.

‘We the Customers of Menzgold wish to inform you that, irrespective of your later statement, we are fully informed by the Securities Industry Act 929 Section 123(2a, 2b, and 2c) that you own customers of Menzgold Company a duty of responsibility by ensuring that the monies that were obtained by Menzgold without a licence from SEC are duly and fully refunded to customers with interest as enshrined in the SEC Act 929”, they said.

They argued the SEC’s several letters to the Minerals Commission; citing one on September 3, 2018, indicated that Menzgold in 2016 was dealing in securities with a guaranteed return and for which the SEC began investigations.

“In all your investigations and directives to ensure adherence to the Securities Industry Act, we expected you to prioritise the protection of our investment with Menzgold as per the SEC Act 929. Secondly, you were to ensure our monies obtained by Menzgold without your Licence are fully refunded to all customers. Since you have fully admitted in your earlier letters that Menzgold was operating in securities. Unfortunately, to date you have failed to give customers of Menzgold any update on your plans and attempts to ensure Menzgold refunds our monies,” they said.

“Knowing the responsibilities, you have towards us, we customers of Menzgold are once again asking your office to make a passionate appeal to the government to reconsider Menzgold customers in an emergency supplementary bailout exercise, that will help forestall the continuous number of deaths and health challenges like strokes that we are recording among our members,” they said.