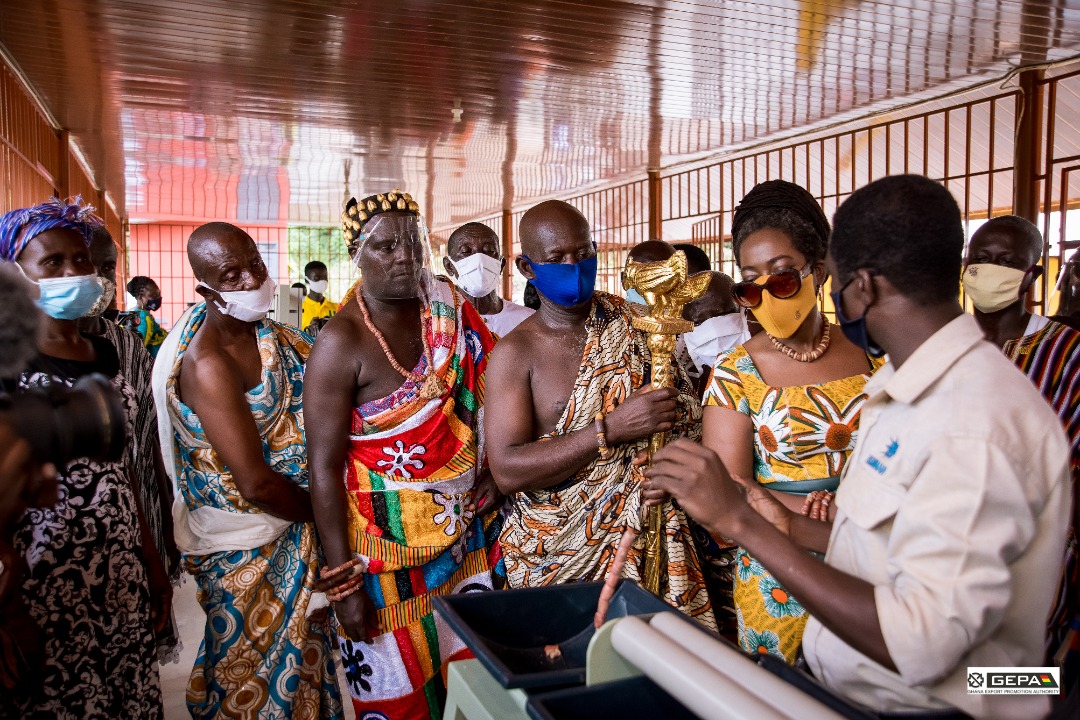 The Ghana Export Promotion Authority (GEPA) has handed over a multi-faceted bauxite beads production facility to the Abompe community in the Fanteakwa South District in the Eastern Region.

The structure, which will serve as a common-use facility for bauxite beads producers in the community, includes a new workshop that comprises a production floor space, a warehouse and washroom facilities.

A media release issued by the authority said the facility had also been equipped with seven machines to enhance the production process and increase output.

Consequently, members of the Abompe Bauxite Beads Producers Association (ABBPA), the main beneficiary of the facility, have undergone intensive training on the use of the machines to enable them to maximise their output.

Background
Hitherto, bauxite bead makers in the area produced their wares using rudimentary manual tools and worked from their homes and other dilapidated structures at the mercy of extreme weather conditions.

After series of interactions with the leadership of the association, the GEPA decided to support the group with a decent facility they could work from.

Handing over
At the handing over ceremony at Abompe on July 30, 2020, the Chief Executive Officer (CEO) of GEPA, Dr Afua Asabea Asare, recalled that during a working visit to the area in 2019 GEPA executives had remarkable reviews about bauxite beads but were stunned to know they were being produced under a slow manual process by scattered entities.

“Today we are proud to inaugurate this facility that has ample floor space for working, washrooms and a warehouse for storage of their products. Abompe can also boast of its own One district-One factory,” she said.

Dr Asare said the authority, as an agency under the Ministry of Trade and Industry, was mandated to develop and promote Ghana’s non-traditional exports and consequently diversify Ghana’s exports for increased foreign exchange.

Over the years, she said, the GEPA had taken the lead in identifying a wide variety of products in the categories of agribusiness, processed and semi-processed items, handicraft and professional services.

Thus, she said the authority introduced a number of initiatives to uplift the handicraft sector and improve output generally to enable Ghana’s art and craft to regain an enviable position on the export market.

“Work has begun in Aburi to construct an ultramodern craft centre that will serve as a tourist shopping centre, as well as an exhibition space. We have similar plans for the art and craft centres in Abrafo in the Central Region, Kpetoe in the Volta Region and the Bolga straw market in the Upper East Region,” she said.

She added that those initiatives were aligned to the industrialisation agenda of the government.

She commended the Abompehene, Nana Barima Kwadwo Addo, for being instrumental in supporting the GEPA acquire the site for the facility.