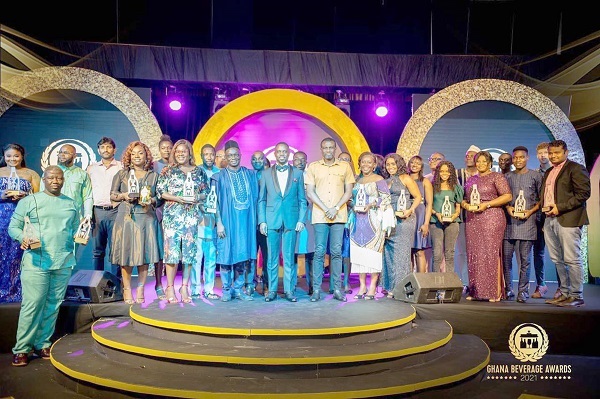 Fourteen beverage companies have been awarded at the 6th edition of the Ghana Beverage Awards held in Accra on Friday, April 8.

Organised by Global Media Alliance (GMA) on the theme: “Inspiring Excellence in Ghana’s Beverage Industry”, the event aimed at celebrating the beverage industry and its stakeholders for contributing significantly to the Ghanaian economy.

Winners on the night

At the well-organised event which attracted players within the industry and some government officials, Coca-Cola Bottling Company took the highest award: Product of the Year. The company, which has been aggressive in the last couple of years in an attempt to revive its dominance in the industry, also picked the Carbonated Soft Drink (CSD) of the Year and Corporate Social Responsibility (CSR) Company of the Year awards.

At the event, the Chief Executive Officer (CEO) of GMA, Ernest Boateng, said in spite of the supply change disruptions that emerged as a result of COVID-19 lockdowns and restrictions, the beverage industry appeared to be rebounding.

During the lockdown, some players in the beverage space showed their innovativeness when they were able to modify their assembly lines to fill the much-needed requirements for sanitisers which helped the country meet its demand for sanitisers when advanced countries were experiencing severe shortages.

A Deputy Minister of Trade and Industry, Mr Michael Okyere Baafi, in a speech read on his behalf said the beverage industry had consistently demonstrated a sense of responsibility by giving back to the society within which it operated.

He indicated that the country’s producers were not only extracting but also caring for the environment and the residents of the communities in which they operated.

“In the face of all the economic difficulties, all of which could stall the hard work of the beverage industry, we acknowledge the strong will of our stakeholders to remain in business,” he said.

Partners
The event was held in collaboration with the Food Research Institute (FRI) under CSIR, Consumer Protection Agency (CPA), Food and Beverage Association of Ghana (FABAG) and the Ghana Tourism Authority (GTA).