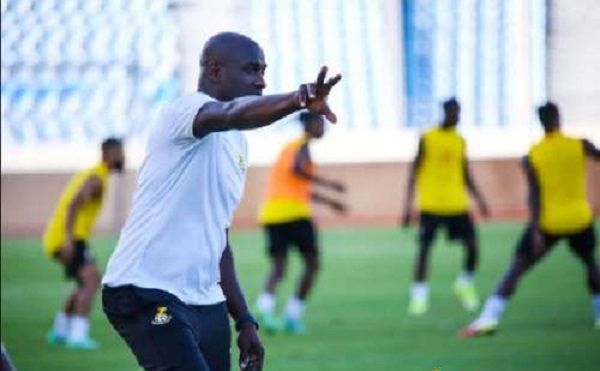 Interim Black Stars coach, Otto Addo and his assistants have assured Ghanaians of the team’s readiness to make the nation proud by defeating Nigeria to qualify for the 2022 FIFA World Cup slated for Qatar in November.

In a short address to the nation about the upcoming FIFA World Cup qualifying playoff against Nigeria at the Baba Yara Stadium on Friday, the coach explained that the playing body and technical team were committed to ensuring the sole ticket to the Mundial did not elude them.

Addo, an assistant coach at German Bundesliga side Borussia Dortmund, was handed the task of leading Ghana's technical team on an interim basis, following the dismissal last month of Serbian coach Milovan Rajevac after an abysmal Africa Cup of Nations campaign which saw Ghana exiting the tournament at the group phase. He will be assisted by compatriots Mas-Ud Didi Dramani and George Boateng, with Irish-Ghanaian Chris Hughton as the Technical Advisor.

Acknowledging that the task ahead would be daunting, the 46-year-old Addo said he had confidence in the strategies put in place and with the support of the public, the Black Stars would definitely emerge victorious in the two-leg encounter.

“We really want to make ourselves and the nation proud by qualifying for this upcoming World Cup. Matches between Ghana and Nigeria are always difficult but we believe in our players, we believe in our strategies and we believe in the unflinching support of all Ghanaians as we go into these two matches," he said.

A former Ghana international, who made 15 appearances for Ghana, including playing at the 2006 FIFA World Cup in Germany, the caretaker coach emphasised that the players, technical team and the Ghana Football Association (GFA) were committed to ensuring that Ghana made a fourth World Cup appearance after missing the last tournament in Russia four years ago.

“We all expect Ghana to qualify for the World Cup in Qatar 2022 but that won’t be easy as we need to do our best to make it to this tournament. The players, the technical team and the Ghana Football Association are committed to this task”, he said.
Addo believes the Black Stars have the pedigree at the international stage and with the quality at their disposal, the team would triumph over the Super Eagles. “We are Ghana and we have what it takes to come out victorious.”