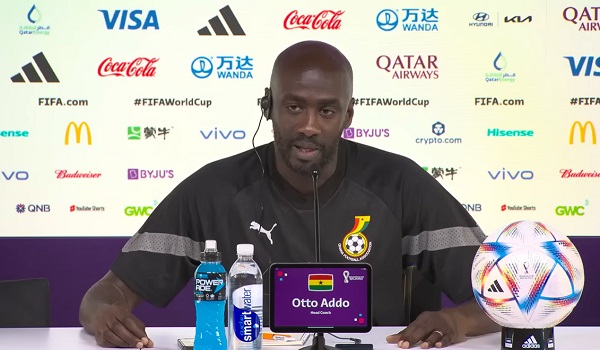 Addo took aim at the referee Elfath after he awarded Cristiano Ronaldo a penalty to open the scoring as Portugal went on to beat Ghana.

He described the penalty award as a gift and revealed that he attempted to speak to the referee after the game.

Addo said he felt Ghana defender Mohammed Salisu didn’t foul Ronaldo for the penalty and complained that the officials didn’t refer the contentious decision to the Video Assistant Referee (VAR).

Speaking at a pre-match conference yesterday, Addo apologised for his comments, adding that he was hopeful that he would not receive any sanctions from FIFA.

He added that the GFA had received no official response from FIFA on the matter.

"Up to this point we didn’t get any answer (from FIFA), maybe I can use this stage now to apologise If I was too rude but I was very emotional after the match. Hopefully, I won't get a fine".

Ghana are bottom of Group H with no points after South Korea held Uruguay to a goalless draw in Thursday's match of the group.

Portugal sits top of the group with three points following its victory over the Black Stars. The Portuguese face Uruguay in the group's other match on Monday.

The match between Ghana and 28th-ranked South Korea will be played tomorrow at 1 pm (Ghana time) at the Education City Stadium in Al Rayyan, west of Doha.