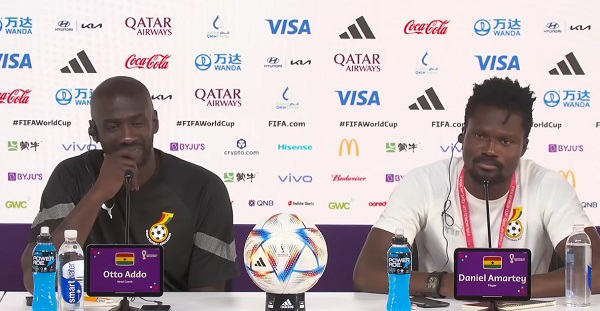 The Black Stars will be looking to get back to winning ways tomorrow after losing 3-2 to Portugal in their Group H opener.

Addo added that although he had a lot of respect for a quality Korean squad he was confident that the Black Stars could compete with them.

"Truly for the defenders (Black Stars defenders) it's more Hwang and Son and we heard the other Hwang from Wolverhampton is a little bit injured," Addo said at yesterday's press conference.

"We will see which players we will face but in all their squad is good but we know we can compete with them".

Ghana are likely to start with at least two centrebacks - Daniel Amartey and Mohammed Salisu - who like the Korean strikers ply their trade in the EPL.

Leicester City defender Amartey told pressmen at today's press briefing that the team was focusing on Korea as a team and not as individuals.

"We have to watch everybody (in the Korean team), everybody is good, it's not just one person," Amartey said.

Korea coach Paulo Bento has since confirmed that Wolves forward Hwang Hee-chan has been ruled out of the game against Ghana on Monday.

Ghana are bottom of Group H with no points after South Korea held Uruguay to a goalless draw in Thursday's match of the group.

Portugal sits top of the group with three points following its victory over the Black Stars. The Portuguese face Uruguay in the group's other match on Monday.

The match between Ghana and 28th-ranked South Korea will be played tomorrow at 1 pm (Ghana time) at the Education City Stadium in Al Rayyan, west of Doha.